I’ve knitted small items to use up small amounts of yarn, I’ve birthday cardigans for my mother, I’ve knitted hats, scarves and a cabled sweater for the Man of the House, I’ve even knitted a squirrel-shaped cushion for the dog, but in recent years I’ve knitted not much in the way of garments for me.

This year that is going to change, and my new outlook is  – WARDROBE BUILDING!

That means finding interesting patterns, that I’ll enjoy knitting; and it means making sure what I’ll knit will suit me, and that I’ll have occasion to wear it.

It also means using the right yarn – I’ve made some lovely sweaters in the past that have been relegated to dog-walking and housekeeping duty because the yarn was wrong. And balance that with using the yarn I have in hand.

It works as theory – whether it works in practice remains to be seen.

But enough pontificating, on to the project in question.

There were lots of lovely garments in Rowan 56; and when I’d eliminated the unwearable and impractical, the ones that would require more work or more finance than I felt was justified I was left with two. 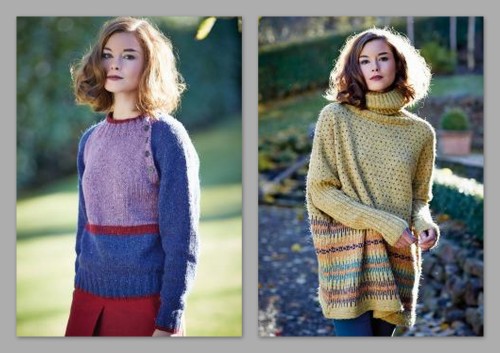 I’ve accumulated the yarn for Franziska – the garment on the right – in a slighly different colour scheme, and not quite so over-sized. I plan to start knitting soon.

But the sweater on the left – Heike, came first – because I knew it would be quicker, because I needed some simple knitting after all those cables, and because I knew I could use yarn I had already for two of the three colours.

I had five balls of Rowan Scottish Tweed in a rich dark brown shade called ‘Thatch’, and I had a single ball in a shade with the self-explanatory name ‘Oatmeal’.

I’d bought them to make a short sleeved sweater, but my initial love of the pattern I had spotted in a magazine wore off and it had been waiting for quite some time.

I really should wait until I’ve lived with a pattern for a while, ideally until I’m ready to knit, before I buy yarn. Or, if I can’t live up to that high ideal, at least buy yarn that will stand the test of time ….

I needed my third colour, I knew that Rowan Felted Tweed was much loved, and I knew that the Aran knitted to the same gauge as my Scottish Tweed, and so I studied a shade-card. And I ordered a complementary shade of green called Glade.

This was  going to be an autumnal sweater, a countryside sweater, but I liked the colours and they worked together.

It was a straightforward piece of knitting, and I followed the pattern exactly, except that I made mine a little bit longer. Oh, and I reworked the shaping towards the top, because the tops of the sleeves looked as if they had a little too much fabric in the pattern picture.

So here it is: 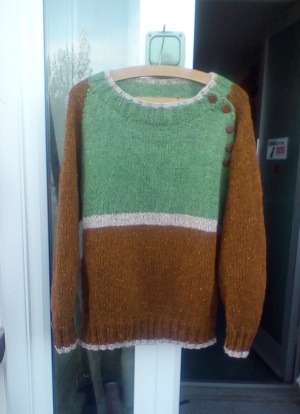 Definitely an out in the country with the dog kind of sweater ….

The fit is as I wanted, the yarn was lovely to work with, and the only other thing I should mention is that I think the yarn quantities in the magazine were a little off. The Thatch and the Oatmeal went as I thought, but I only used half of the Felted Tweed – and it was the yarn specified in the pattern!

The Man of the House said that he liked the colours, that he’d wear something in similar colours, but I have another project in mind.

For now though I’m working on a cardigan; something a little more girly, and wonderfully cosy for next winter ….

22 thoughts on “Finally – a knitted garment for me!”