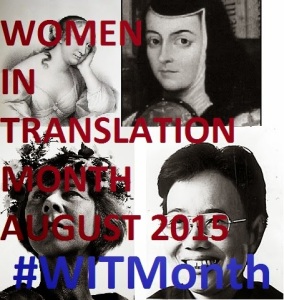 August, for the second year in a row, is  Women in Translation Month. Last year I read and I discovered some wonderful books, and so I couldn’t let it pass me by this year.

I never can resist making a list, and so I looked around the house and I pulled together a lovely pile of possibilities. Each and every one is calling me. I can’t possibly read them all but I will read some of them.

Here they all are:

The smallest book in my collection

“Sir Lionel Bridgemont, a wealthy young English traveller, and Lavinia Buenafè, a young well-born Portuguese girl, had thought, ten years ago when they were betrothed, that their love was forever. But Lionel abandoned her, miserably, breaking her heart. He has continued his wandering life; she has married a wealthy nobleman and become a widow. Now the news of his forthcoming marriage reaches her, and she writes to him to suggest that they return each other’s letters. Considering that they are, for the first time since they parted, physically so close to one another, high up in the Pyrenees, they cautiously decide to meet.”

“It is the dead of night. Sixteen-year-old Tiuri must spend hours locked in a chapel in silent contemplation if he is to be knighted the next day. But, as he waits by the light of a flickering candle, he hears a knock at the door and a voice desperately asking for help. A secret letter must be delivered to King Unauwen across the Great Mountains – a letter upon which the fate of the entire kingdom depends. “

“Set in the mid-18th century, this novel tells of the noble Ucria family, seen through the eyes of the deaf-mute Duchess Marianna. Married at 13 to her uncle, Marianna searches for fulfilment in a society in which women face either endless childbearing or a life of renunciation within a convent.”

The Book that I’d almost forgotten I had

“Yoshimoto spins the stories of three young women bewitched into a spiritual sleep. One, mourning for a lost lover, finds herself sleepwalking at night. Another, who has embarked on a relationship with a man whose wife is in a coma, finds herself suddenly unable to stay awake. A third finds her sleep haunted by a woman against whom she was once pitted in a love triangle. Sly and mystical as a ghost story, with a touch of Kafkaesque surrealism, Asleep is an enchanting new book from one of the best writers in contemporary international fiction.”

“Deborah is an autobiographical novel. It takes us back with cinematic immediacy to the world of Polish Jewry in the middle of Europe well before the First World War. Deborah is the daughter of a feckless, unworldy rabbi, Reb Avram Ber, and his wife, Raizela. She is fourteen years old, sensitive, intelligent and romantic; but the two things she longs for are denied her: education and marriage to the man of her choice – a dark-eyed Marzist she meets in Warsaw’s Jewish Ghetto. For Deborah is doubly oppressed: there is literally no hope for women in this society if the established order is not accepted. Propelled into an arranged marriage, she escapes her family and her country on the eve of the First World War to dream a terrifying dream of another – a portent of the horror that lay in store for millions of Jews in the decades to follow.

The volume of short stories by a beloved author

“This translated collection of stories brilliantly evokes the shifting scenes and restlessness of summer. A professor arrives in a beautiful Spanish village only to find that her host has left and she must cope with fractious neighbours alone; a holiday on a Finnish island is thrown into disarray when a disconcerting young boy arrives.“

“The story of five children and their loyal and resolute friendship, MANJA opens with the five nights on which they are conceived. They gradually meet and, only partly understanding, are drawn into the destinies of their parents: the left-wing activist to imprisonment and flight, the Nazi from poverty and humiliation to power, the doctor forced to defend his humanitarian stance, the financier in increasingly desperate attempts at assimilation – and the Jewish parents of Manja herself.”

The memoirs of a 19th century traveller and social reformer

Peregrinations of a Pariah by Flora Tristan – translated by Jean Hawkes

“A pioneer of Latin American feminist movement and instrumental in the growth of Utopian Socialism, the life of Peruvian-French social activist Flora Tristan took her on a global journey of the sort seldom undertaken by lone women of the time. Undaunted, Flora took it upon herself to raise and defend the cause of the oppressed and challenge the injustice she saw, documenting and publishing her travels and observations in Peregrinations of a Pariah .”

“The World Is Not Enough re-creates medieval life. This first of Zoe Oldenbourg’s acclaimed historical novels chronicles the lives of a remarkable gallery of people in twelfth century France and the catastrophic upheavals of the Second and Third Crusades.”

“Little known, little remembered, this is the story of Begum Hazrat Mahal. The soul of the 1857 War of Independence; orphaned poetess of the Chowk; captivating wife of King Wajid Ali Shah of Awadh; the Rani of Jhansi’s contemporary and soul sister; freedom fighter and misunderstood mother; illicit lover and intrepid war leader – she risked everything only to face the greatest betrayal of all. This is a gripping tale behind the scenes of the first war of independence fought by Indians against the British.”

The big book the I started, loved, but drifted away from

“A landmark among historical novels, Kristin Lavransdatter is part of the body of work that won Sigrid Undset the Nobel Prize for Literature in 1928. This trilogy of more than one thousand pages follows its title character through her life in fourteenth-century Norway. It is a novel full of big and dramatic happenings: romantic intrigues, political schemes, and spiritual debates. It is also a novel about one woman’s life, set against a richly detailed historical backdrop.”

“One of the world’s greatest correspondents, Madame de Sévigné (1626-96) paints an extraordinarily vivid picture of France at the time of Louis XIV, in eloquent letters written throughout her life to family and friends. A significant figure in French society and literary circles, whose close friends included Madame de La Fayette and La Rochefoucauld, she reflected on both significant historical events and personal issues, and in this selection of the most significant letters, spanning almost fifty years, she is by turns humorous and melancholic, profound and superficial. Whether describing the new plays of Racine and Molière, speculating on court scandals – including the intrigues of the King’s mistresses – or relating her own family concerns, Madame de Sévigné provides throughout an intriguing portrait of the lost age of Le Roi Soleil.”

And that’s it – a selection of books to chose from – for the next month and for the months beyond.

I’m sorry for the lack of pictures, but WordPress doesn’t seem to like me tonight.

Do you have any plans for reading women in translation?

Do you have a particular favourite book or author to recommend?

25 thoughts on “Making a List: Women in Translation Month”