I knew that Richmal Crompton had written books for grown-ups as well as for children, of course I did. I’d seen a few books reissued here and there, I’d read much about how good she was, but I didn’t realise that she wasn’t a children’s writer who dabbled in adult books, that she had written a great many books over the course of her writing career, until I caught sight of a wonderful range of titles on the horizon, courtesy of the lovely Bello Books.

Look at them all! 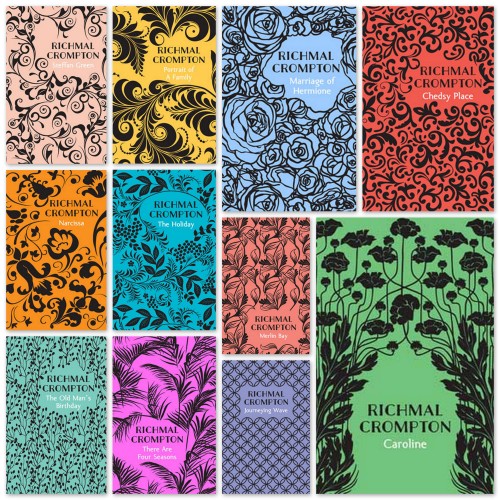 I was so curious to know what lay behind that lovely array of covers, and I was delighted to be able to pick up the first one. The book I picked up was ‘Caroline’, the book with the green cover, bottom left. I thought I knew what to expect; a book about home, family, and the lives of the middle classes between the wars. And that was what I got, but in a way that I didn’t expect at all.

If I had just the one sentence I’d describe ‘Caroline’ as ‘middlebrow domestic psychological suspense’, I’d say that I found it very easy to be caught up with the characters and their stories, and I’d say that I really enjoyed it.

Caroline was adored by her family. They loved and respected her, and they appreciated everything that she did for them.

Her mother had run away from her husband, leaving her children behind, when Caroline was just four years-old. Her father remarried,  but his second wife died and then he died too. Caroline had won a university place, but she gave it up to raise her three young half-siblings.

But can you spot the problem?

Caroline saw no way but her own; Caroline could not let go; and Caroline always knew best.

She was a force of nature!

Her family knew that, and they always accepted that whatever Caroline might say or do was right, because she loved them and she had their best interests at heart. Their spouses, their friends might disagree, but they were steamrollered every time.

It was horribly believable; unsubtle at times, but I understood the psychology.

Everything changed when Caroline’s mother reappeared. Caroline was eager to welcome her, expecting to be able to play the ministering angel to a frail elderly lady, who would be so very grateful to be forgiven and cared for by such a wonderful daughter.

Philippa was grateful; but she was fit, active and independent; and she had enough experience of life and the world to see exactly what Caroline was and what she was doing to the family she loved.

That was the beginning of a battle to do the right thing for the family. Though of course neither mother or daughter would call it that, and all of their tactics were covert.

Would they help or harm the family?

I read very quickly, because the writing was so engaging, and the characters so knowable. They all infuriated me at times, but I understood why they were who they were, and why the story played out as it did. There’s enough detail and complexity in the plot and the characters to ensure that things are always interesting.

They key to the story was getting Caroline’s character right, and Richmal Crompton did that. She loved and wanted the best for her family, but she couldn’t see that what she thought would have made her happy might not work for them, and she didn’t understand that loved changed everything.

Her mother’s comment that she was just like her father was timely, and it really made me think and helped me to understand each woman.

You could say that Caroline was a domineering matriarch; but you could also say that she was a tragic figure.

Her story is firmly rooted in its era, but there is much in the careful study of the family that is timeless. A woman trapped by the role that she is expected to play ….

I could quibble about one or two details; but they don’t matter too much because the big picture is right.

I have to say that this is a very good story, well thought out and well told.

And that I’m looking forward to finding out what’s inside those other books!