“O, blackberry tart, with berries as big as your thumb, purple and black, and thick with juice, and a crust to endear them that will go to cream in your mouth, and both passing down with such a taste that will make you close your eyes and wish you might live for ever in the wideness of that rich moment.” 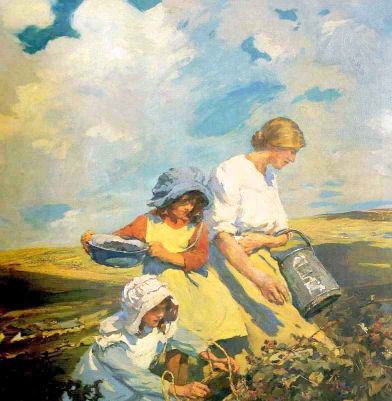 Fringing the woods, the stone walls, and the lanes,
Old thickets everywhere have come alive,
Their new leaves reaching out in fans of five
From tangles overarched by this year’s canes.

They have their flowers too, it being June,
And here or there in brambled dark-and-light
Are small, five-petaled blooms of chalky white,
As random-clustered and as loosely strewn

As the far stars, of which we now are told
That ever faster do they bolt away,
And that a night may come in which, some say,
We shall have only blackness to behold.

I have no time for any change so great,
But I shall see the August weather spur
Berries to ripen where the flowers were—
Dark berries, savage-sweet and worth the wait—

And there will come the moment to be quick
And save some from the birds, and I shall need
Two pails, old clothes in which to stain and bleed,
And a grandchild to talk with while we pick. 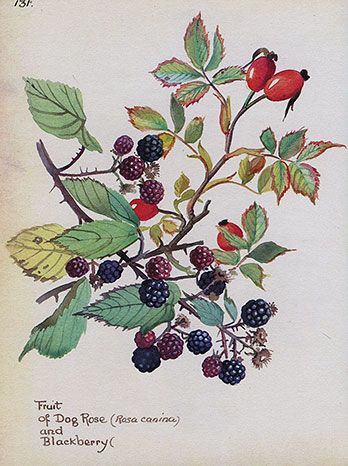 From ‘The Country Diary of an Edwardian Lady’

Place a 9 inch flan ring on a flat tray and line with greased greaseproof. Place the biscuits into a processor and mix till fine crumbs are achieved.Place the crumbed biscuit into a bowl and add the softened butter. With a wooden spoon mix thoroughly.Fill the base of the flan ring with the crumb mix pressing down firmly. Place in a refrigerator, for at least an hour, to firm up.Heat up a saucepan and add the blackberries and sugar, gently cook them together until the sugar is melted, keeping the fruit as whole as possible. Remove from heat and allow to cool.Place the cream cheese into a bowl and mix until smooth.Whisk the cream till it forms soft peaks.Carefully fold the cream into the cream cheese using a whisk.Gently fold in the blackberries to the cream and cheese mix (the aim is to get a marbled effect, so don’t over mix at this stage).Remove the biscuit base from the refrigerator and fill with the blackberry mix.Carefully level off the mix and return to the refrigerator for at least a further hour.When set remove from the refrigerator, carefully slip off the flan ring and gently remove the greaseproof from the sides of the cheesecake. Cut into portions using a sharp knife dipped in hot water. Decorate with a generous sprig of fresh garden mint.

Courtesy of the National Trust

“September 15th. – This is the month of quiet days, crimson creepers, and blackberries; of mellow afternoons in the ripening garden; of tea under acacias instead of too shady beeches; of wood fires in the library in chilly evenings.”

Nobody in the lane, and nothing, nothing but blackberries,
Blackberries on either side, though on the right mainly,
A blackberry alley, going down in hooks, and a sea
Somewhere at the end of it, heaving. Blackberries
Big as the ball of my thumb, and dumb as eyes
Ebon in the hedges, fat
With blue-red juices. These they squander on my fingers.
I had not asked for such a blood sisterhood; they must love me.
They accommodate themselves to my milkbottle, flattening their sides.
Overhead go the choughs in black, cacophonous flocks—
Bits of burnt paper wheeling in a blown sky.
Theirs is the only voice, protesting, protesting.
I do not think the sea will appear at all.
The high, green meadows are glowing, as if lit from within.
I come to one bush of berries so ripe it is a bush of flies,
Hanging their bluegreen bellies and their wing panes in a Chinese screen.
The honey-feast of the berries has stunned them; they believe in heaven.
One more hook, and the berries and bushes end.
The only thing to come now is the sea.
From between two hills a sudden wind funnels at me,
Slapping its phantom laundry in my face.
These hills are too green and sweet to have tasted salt.
I follow the sheep path between them. A last hook brings me
To the hills’ northern face, and the face is orange rock
That looks out on nothing, nothing but a great space
Of white and pewter lights, and a din like silversmiths
Beating and beating at an intractable metal.
Sylvia Plath (1962 – 1963) 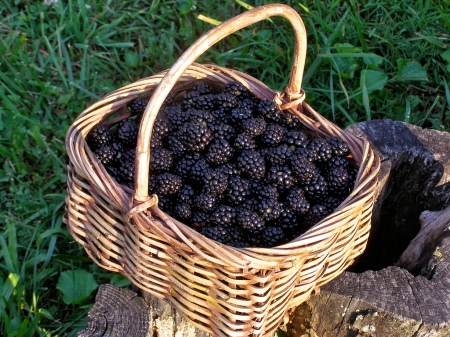 So, what would you make with them?

29 thoughts on “A Seasonal Collection: Blackberrying”