I have had a lovely time, meeting Miss Dot Allbones, in London, in the late 1880s.

She was a music hall performer, a singer and a comedienne, and I warmed to her from the start. I learned that she had risen from humble beginnings, in the Midlands; that she had been encouraged when she showed signs of talent at a very young age; and, though she had been married, she was happy that she could support herself in her own home in Victoria Park.

That isn’t to say that she didn’t enjoy the company of men. she enjoyed an intimate relationship with journalist Tom Bullen; she got on well with her young lodger, rising artiste Valentine St John; and she had a warm, professional relationship with her long-time manager, Monty Hyams. 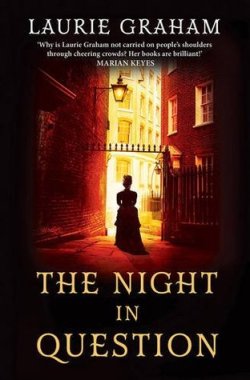 She appreciated her good fortune, and she always looked after her friends. She liked to be appreciated – and she was concerned that as she got older she was being pushed a little further down the bill than she had been – but she knew was fortunate, and that others were much less fortunate through no fault of their own.

Dot was warm and outgoing, she was witty and self-deprecating; she was excellent company, and her voice always rang true.

It’s been a long time since I read Laurie Graham, but I remember that she often drops a fictional character into a well-know story from the past, and that what she has done again here.

In East London, not so very far away, brutal killings, that would be attributed to Jack the Ripper, had begun. Everyone was talking about it. Dot always made sure that she had an escort to take her home after her nightly performance. Tom was much busier that usual, chasing stories. Monty joined a group of men who would patrol the streets at night.

Dot was particularly worried about Kate, a childhood friend she had met for the first time in years. She went out of her way to help her, and her help had been much appreciated. But Dot knew that Kate was too fond of a drink. I appreciated that Dot had the sense to give things, and to give her time, rather than money. I loved that when her friends were critical, she pointed out that they came from the same place and it was just that she’s been lucky and Kate hadn’t – though there was actually a little more to it than that- and I really loved that she stood up for women who ‘went with men, pointing out that most of them only did it because they had no other way of getting the money they desperately needed to pay for food and shelter.

She was also concerned about Valentine’s American friend, Dr Frank Townsend. Valentine was clearly very taken with him, but he was unwilling to step forward when a medical man was needed, he was vague about exactly what it was he did, and Dot was sure that something was amiss, though she couldn’t quite say what.

All of this plays out beautifully. The characterisation is marvellous, the evocation of time and place is exactly hat it should be, and the story is clearly underpinned by careful research into the music hall, into 19th century London life, and into the Ripper case.

Because one of the killings sends shockwaves through Dot’s circle of friends.

I only knew the broad history, but when I went to look up a few specifics I found that Laurie Graham had fitted her own story around the real history very cleverly indeed. She takes just a little artistic licence, but nothing that I felt was unreasonable.

The tone changes a little in the latter part of the story, inevitably, given what had happened, and it works very well. The story needed a change of gear, and that change of gear made me realise how caught up I was, with Dot and her world.

I wondered if the ending would be effective – given that the real history had no real conclusion – but it was.

Some things changed, and some things stayed the same.

This was a wonderfully engaging and entertaining story; I loved the way it balance the darker side of life with humour; and I loved meeting all of the people and stepping into their world for a little while.