“Squeeze your eyes closed, as tight as you can, and think of all your favorite autumns, crisp and perfect, all bound up together like a stack of cards. That is what it is like, the awful, wonderful brightness of Fairy colors. Try to smell the hard, pale wood sending up sharp, green smoke into the afternoon. To feel the mellow, golden sun on your skin, more gentle and cozier and more golden than even the light of your favorite reading nook at the close of the day.”

From ‘The Girl Who Circumnavigated Fairyland in a Ship of Her Own Making’ by Catherynne M. Valente

In the month of the long decline of roses
I, beholding the summer dead before me,
Set my face to the sea and journeyed silent,
Gazing eagerly where above the sea-mark
Flame as fierce as the fervid eyes of lions
Half divided the eyelids of the sunset;
Till I heard as it were a noise of waters
Moving tremulous under feet of angels
Multitudinous, out of all the heavens;
Knew the fluttering wind, the fluttered foliage,
Shaken fitfully, full of sound and shadow;
And saw, trodden upon by noiseless angels,
Long mysterious reaches fed with moonlight,
Sweet sad straits in a soft subsiding channel,
Blown about by the lips of winds I knew not,
Winds not born in the north nor any quarter,
Winds not warm with the south nor any sunshine;
Heard between them a voice of exultation,
‘Lo, the summer is dead, the sun is faded,
Even like as a leaf the year is withered,
All the fruits of the day from all her branches
Gathered, neither is any left to gather.
All the flowers are dead, the tender blossoms,
All are taken away; the season wasted,
Like an ember among the fallen ashes.
Now with light of the winter days, with moonlight,
Light of snow, and the bitter light of hoarfrost,
We bring flowers that fade not after autumn,
Pale white chaplets and crowns of latter seasons,
Fair false leaves (but the summer leaves were falser),
Woven under the eyes of stars and planets
When low light was upon the windy reaches
Where the flower of foam was blown, a lily
Dropt among the sonorous fruitless furrows
And green fields of the sea that make no pasture:
Since the winter begins, the weeping winter,
All whose flowers are tears, and round his temples
Iron blossom of frost is bound for ever.’

‘Sad; so sad, those smoky-rose, smoky-mauve evenings of late autumn, sad enough to pierce the heart. The sun departs the sky in winding sheets of gaudy cloud; anguish enters the city, a sense of the bitterest regret, a nostalgia for things we never knew, anguish of the turn of the year, the time of impotent yearning, the inconsolable season’

From ‘ Saints and Strangers’ by Angela Carter

“Her pleasure in the walk must arise from the exercise and the day, from the view of the last smiles of the year upon the tawny leaves and withered hedges, and from repeating to herself some few of the thousand poetical descriptions extant of autumn–that season of peculiar and inexhaustible influence on the mind of taste and tenderness–that season which has drawn from every poet worthy of being read some attempt at description, or some lines of feeling.”

From ‘Persuasion’ by Jane Austen

Now’s the time when children’s noses
All become as red as roses
And the colour of their faces
Makes me think of orchard places
Where the juicy apples grow,
And tomatoes in a row.

And to-day the hardened sinner
Never could be late for dinner,
But will jump up to the table
Just as soon as he is able,
Ask for three times hot roast mutton–
Oh! the shocking little glutton.

Come then, find your ball and racket,
Pop into your winter jacket,
With the lovely bear-skin lining.
While the sun is brightly shining,
Let us run and play together
And just love the autumn weather 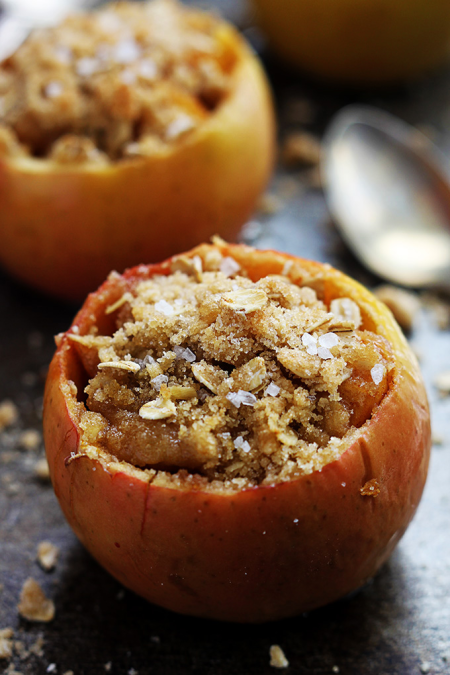 Preheat oven to 400 degrees. First, prepare the crumble topping. In a medium bowl whisk together flour, oats, brown sugar, sugar, salt, and cinnamon. Cut in the butter with a pastry knife, or two forks, or with your hands until mixture is crumbly. Set aside. Peel and chop 4 of the apples. Add chopped apples, butter, brown sugar, and cinnamon to a medium sauce pan and sauté over medium heat for 8-10 minutes or until apples are tender. Remove from heat. Chop the tops off of the remaining 4 apples and use a spoon to scoop out the flesh. Discard the flesh or save it for another recipe. You don’t need to get every little bit out, just enough to make a “bowl” for the filling. Fill scooped-out apples with apple filling from the sauce pan. Top with a generous amount of crumble topping. Place stuffed apples on a baking sheet and bake for 10-15 minutes until crumble topping is crispy. Serve warm and top with ice cream and caramel sauce if desired. Enjoy!

“Is not this a true autumn day? Just the still melancholy that I love – that makes life and nature harmonize. The birds are consulting about their migrations, the trees are putting on the hectic or the pallid hues of decay, and begin to strew the ground, that one’s very footsteps may not disturb the repose of earth and air, while they give us a scent that is a perfect anodyne to the restless spirit. Delicious autumn! My very soul is wedded to it, and if I were a bird I would fly about the earth seeking the successive autumns.”

29 thoughts on “A Seasonal Collection: Autumn”