After reading George Eliot’s First Tale of Clerical Life I thought I knew what to expect of her second; another account of a clergyman’s life in a country parish told with warmth and intelligence. I expected a contrasting story, because Maynard Gifil had been refered to in Amos Barton’s story, as a former parish priest who had understood his parishioners so much better than the new incumbent.

The opening had me fooled. It introduced Mr. Gilfil as an old man, long established as the vicar of Shepperton, and it illustrated why he had been so popular. He was comfortable in the role of parish priest, he was sensitive to his congregations wishes, he preached short sermons, and he was a man who had no family; he belonged to his congregation.

It was lovely to meet the narrator I knew and loved from the first Tale of Clerical life, I was happy to meet one or two familiar characters again and I settled in for another story of life in Shepperton. 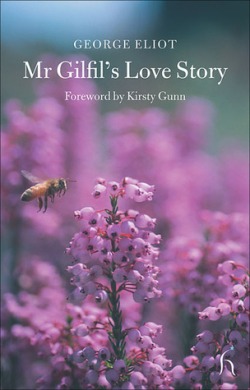 “There’s that case-hardened old Judy a-coming after the tea-leaves again,’ Mrs. Hackit would say; ‘an’ I’m fool enough to give ’em her, though Sally wants ’em all the while to sweep the floors with!’

Such was Dame Fripp, whom Mr. Gilfil, riding leisurely in top-boots and spurs from doing duty at Knebley one warm Sunday afternoon, observed sitting in the dry ditch near her cottage, and by her side a large pig, who, with that ease and confidence belonging to perfect friendship, was lying with his head in her lap, and making no effort to play the agreeable beyond an occasional grunt.

‘Why, Mrs. Fripp,’ said the Vicar, ‘I didn’t know you had such a fine pig. You’ll have some rare flitches at Christmas!’

‘Eh, God forbid! My son gev him me two ‘ear ago, an’ he’s been company to me iver sin’. I couldn’t find i’ my heart to part wi’m, if I niver knowed the taste o’ bacon-fat again.’

‘Why, he’ll eat his head off, and yours too. How can you go on keeping a pig, and making nothing by him?’

‘O, he picks a bit hisself wi’ rootin’, and I dooant mind doing wi’out to gi’ him summat. A bit o’ company’s meat an’ drink too, an’ he follers me about, and grunts when I spake to’m, just like a Christian.’

Mr. Gilfil laughed, and I am obliged to admit that he said good-bye to Dame Fripp without asking her why she had not been to church, or making the slightest effort for her spiritual edification. But the next day he ordered his man David to take her a great piece of bacon, with a message, saying, the parson wanted to make sure that Mrs. Fripp would know the taste of bacon-fat again.”

It wasn’t long though before the story moved into the past, quite naturally; to tell Mr. Gilfil’ love story, and to explain how he had come to be alone.

Maynard Gilfil had been chaplain at Cheverel Manor, and it was there that he fell in love with Caterina Sarti. Caterina, who was always known as ‘Tina’, was an Italian orphan and the ward of Sir Christopher and Lady Cheverel, who took her into their care following the death of her father.

Sadly, Mr. Gilfil’s love for Tina was not returned. She liked him well enough, but she was utterly besotted with Captain Anthony Wybrow, nephew and heir of Sir Christopher Cheverel. And she thought it was her destiny to be the next lady of the manor.

That would never be. The Cheverels were prompting a match between their nephew and Miss Beatrice Assher, the daughter of a very dear friend;  and they hoped that Tina would marry Mr. Gilfil. Wybrow, but he flirted with Tina, and she was quite convinced that he loved her as much as she loved him.

Mr. Gilfil saw all of this, and he realised that there was nothing he do to save Tina from heartbreak.

I saw the influence of earlier women writers – Jane Austen in particular – in the beginning of this story. And then I began to think that George Eliot was testing her literary wings, deciding what kind of author she might like to be, because then there was a dash of sensation novel.

There was a terrible tragedy.

There was a serious misunderstanding.

And all of that led to high drama.

I can’t fault the storytelling. the psychology, or the writing. I just have to complain that the author was a little judgemental when she wrote of Tina, who was no more that a foolish girl blinded by love.

Some time later, Mr. Gilfil met Tina again. She was a little older and a little wiser, she came to appreciate his love and devotion, and she came to love him too. They married, but there would be no happy ending. Tina’s health had been compromised by those dramatic events that she so wanted to put behind her, and she died in childbirth.

That left Mr. Gilfil to live out the rest of his life alone.

This wasn’t George Eliot at the height of her powers; but it was an engaging story, a believable human drama, very well told.

She might have become a very good sensation novelist; but I’m glad that she didn’t, because the road that she chose was much more interesting.

7 thoughts on “A Second Tale of Clerical Life; Quite Unlike the First”