Because if I had the houseroom I’d love to display my collection, with the covers facing outwards, on the walls ….

This came before the better known film tie-in edition. 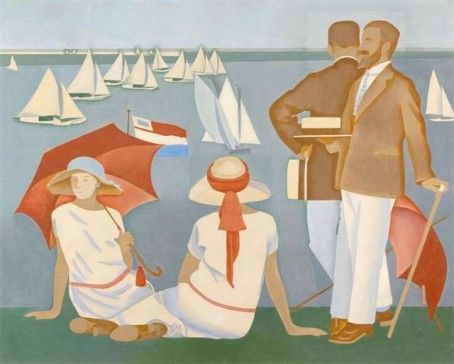 “A discreet advertisement in The Times, address to “those who Appreciate Wisteria and Sunshine …”, is the prelude to a revolutionary month for four very different women. High above a bay on the Italian Riviera stands San Salvatore, a medieval castle. Beckoned to this haven are Mrs Wilkins, Mrs Arbuthnot, Mrs Fisher and Lady Caroline Dester, each quietly craving a respite. Lulled by the mediterranean spring, the violet mountains and sweet-scented flowers, they gradually shed their public skins and discover a harmony each of them has longed for but none has known. “

The first book I read by an author who is now a particular favourite.

“When Anthony Considine creeps into Mellick town with a stolen horse in 1789, it sets the destiny of his family for decades to come. By the 1850s, through thrift and hard work, his son Honest John has made the Considines a leading Mellick family. In turn, his son Anthony builds a fine house in the country for his wife and children—most especially for his adored son Dennis. Little does he know that when Dennis grows up he will threaten the toil of generations with his love for a peasant girl. A stirring family saga of divided loyalties and individual freedom; of matches made and lost; and of the constraints of religion and family pride.”

A wonderful match of artist and writer 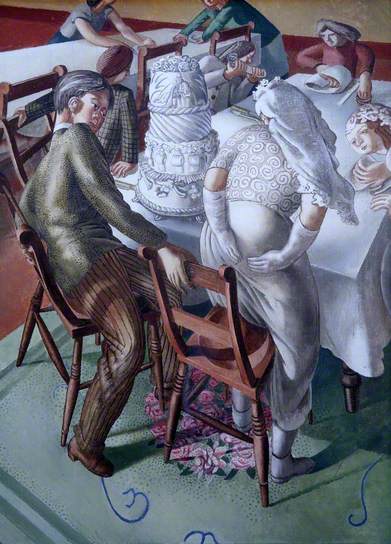 “Sophia is twenty-one years old, naive, unworldly, and irresistible — most particularly to Charles, a young painter whom she married in haste and with whom she plunges into a life of dire poverty. Desperate, Sophia takes up with the dismal, aging art critic Peregrine, and learns to repent both marriage and affair at leisure.”

Our Spoons Came From Woolworths by Barbara Comyns (#109)

The painting that is drawing me towards a lesser known writer 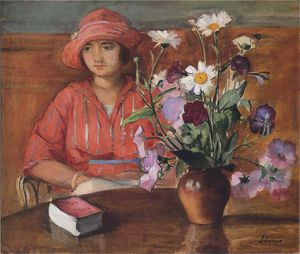 “Louie, intense and solitary, lives in a dreamland of her own until the arrival of her gifted cousin Timothy. He brings her companionship, music, and “the long looked-for stimulation of the mind.” But Tim and Louie are parted when she is sent to convent school, a closed world of prayer and order, and of lasting, passionate friendships. Then comes the shattering advent of the First World War. On leaving school Louie determines to train for business, to “start life as a stern realist,” but finds instead that she will need emotional courage if she is to be the woman her soul demands.”

It was lovely to spot a local artist, who painted many places I know well.

“Rhoda Powell wakes knowing that her mother’s selfish and repining ways will impede their removal from Stone Hall to a new, smaller home. She feels as tethered to her mother’s whims as when she was a child. Maurice, a parent himself now, seems similarly trapped by his boyhood role. only Delia, their younger sister, has moved South, leaving Swarfdale and its memories behind. And Aunt Ellen, the spinster of the previous generation, is a warning to Rhoda of the woman she will become if she does not break away…”

The second green Virago I read, and a still a particular favourite.

“Julia Almond, born into drab suburban povery in Edwardian London, longs for a better life, the fairy-tale world of romance she glimpsed in the toy peepshow of her childhood. She believes she is somebody special, always seeking – through her work, her conventional marriage and finally a young lover – the magic which will make her dreams come true.  But these are peepshow fantasies. For Julia lives at a social level where convention and respectability – particularly for women – exert their most tyrannical hold. Julia cannot escape and in attempting to do so, she brings tragedy to herself and those who love her. “

A Pin to See the Peepshow by F Tennyson Jesse (#11)

I remember seeing the painting and not knowing why it was so familiar.

“Mary Robson is a young Yorkshire woman, married to her solid unromantic cousin, John. Together they battle to preserve Mary’s neglected heritage, her beloved farm, Anderby Wold. This labour of love – and the benevolent tyranny of traditional Yorkshire ways – have made Mary old before her time. Then, into her purposeful life erupts David Rossitur, red-haired, charming, eloquent: how can she help but love him? But David is a young man from a different England, radical, committed to social change. As their confrontation and its consequences inevitably unfold, Mary’s life and that of the calm village of Anderby are changed forever. “

I understand the need to move with the times, and to attract a new generation of readers; but I miss the paintings and I’m sorry that the green spines that led me from author to author have been lost.

37 thoughts on “A Literary Collection: Green Virago Modern Classics and their Paintings”