I have been utterly charmed by Cluny Brown.

She simply followed her heart; oblivious to the strictures that hold most people back.

One day she took herself out to tea at the Ritz; another day she stayed in bed, eating oranges, because she read in a magazine that it would give her vitality.

To many Cluny was a breath of fresh air; but to her Uncle Arn she was a worry. He was a plumber, he had brought up the orphaned Cluny and he was a very conventional man. He worried that his niece didn’t know her place.

The final straw came when, in her uncle’s absence, Cluny set out to unblock a gentleman’s sink.

The correct costume for a young lady going to fix a gentleman’s sink on a Sunday afternoon has never been authoritatively dealt with: Cluny had naturally to carry her uncle’s tool-bag, but as an offset wore her best clothes.

She did an excellent job and the customer was charmed; Cluny was delighted to be offered a cocktail, and she regretfully declined the offer of the use of the loveliest bath she had ever seen. When Uncle Arn arrived and heard Cluny’s account of what had happened, he was aghast.

He consulted Cluny’s Aunt Addie, and between them they decided that the best thing would be to find Cluny a job in service.

Nothing could be easier, in that year 1938, than for a girl to go into good service. The stately homes of England gaped for her. Cluny Brown, moreover, possessed special advantages: height, plainness (but combined with a clear skin) and a perfectly blank expression. This last attribute was not permanent, but the lady at the registry office did not know, and she saw in Cluny the very type of that prized, that fast-disappearing genus, the Tall Parlourmaid.  Addie Trumper too knew what was what; she had been in good service herself, and with footmen practically extinct felt there was no table in the land too high for Cluny to aspire to.

Cluny was dispatched to Devon to work as a maid at Friars Carmel, the country home of Sir Henry and Lady Carmel. She took her new job in her stride; she loved taking the neighbours dog – who she had met on the train down from London – out on her day off; and she was captivated when the village pharmacist took an interest in her, tried to educate her, and maybe even to court her. 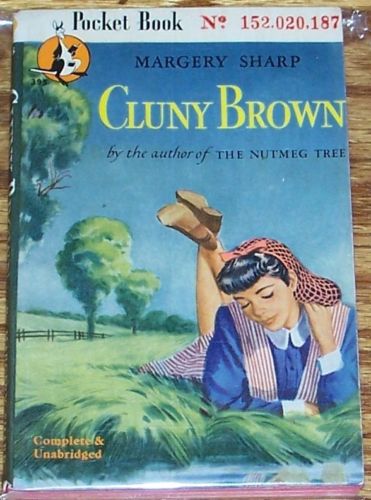 Adam Belinski had arrived at Friars Carmel not long before Cluny. He was a distinguished Polish intellectual, in exile after giving a contentious lecture in Bonn that offended his German hosts. Andrew, the only son of Sir Henry and Lady Carmel,  was sure that the Nazis would be trying to track him down, he wanted to do something to help, and so he offered him sanctuary.  Belinksi  was not so worried, but he was delighted to be offered a home in a quiet country house where he can work, and nurture his growing fame, without distractions.

Upstairs and downstairs at Friars Carmel were separate spheres; but in each sphere was a person who was oblivious to their position, who reached out from their sphere, and those two people met.

Cluny and Belinski met when she was in the library, looking for a certain piece of poetry.

Mr. Belinski obligingly went to a table and did so. Cluny followed…to watch over his shoulder and admire again as the neat lines ran out of his pen. For the first time he had really impressed her.

“I do think you’re clever!” she said sincerely.

“I am, very clever,” replied Mr. Belinski, without looking up. “Who is Mr. Wilson?”

“If he is endeavoring to form your mind with this sort of stuff, he must be a great fool.…”

But Cluny, without paying much attention, took the finished copy and folded it very carefully and put it in her apron pocket.

Meanwhile, Andrew, who fashioned himself as a cosmopolitan young man but was really rather conventional, was courting the lovely Betty Cream. She fashioned herself as a modern girl, he wasn’t at all sure that he could win her heart, but he had to try.

Belinski was charmed by Betty; and Betty was intrigued by Cluny, who she decided ‘looked like somebody.’

And so there was a lovely tangle of characters.

The principals were are beautifully drawn; the other characters were not so finely drawn, but all were drawn well enough to play their part.

That was my one disappointment; there were so many characters I would have liked to known a little better than I did.

I loved the way Margery Sharp told Cluny’s story; I loved the way she set it so well against a time of social change; and I loved her wit and intelligence as much as I ever did.

The ending was beautifully set up, and I can understand why some people didn’t like it, but I thought that it was exactly right for Cluny.

I just wish there was a sequel, because I would love to read the next chapters of her story.

There’s no need to RSVP – though it would be lovely to know if you might come –  all you need to do is to read a Margery Sharp book between now and then, and post about it on the day!

All of the details are here.

I know that’s not quite as easy as it sounds, because all but one of her books are out of print, but I can make it a little easier for one person, because I have a spare copy of ‘Cluny Brown’ to give away.

It’s not a new copy – this is an out of print title – but it is a hardback copy that has been much read and much loved.

It you’d like it just say so in a comment. I’ll make a draw in a couple of days, so that the book can travel anywhere in the world in time to be read for the big day.