It seemed to be an impossible crime.

Mary Gregor was murdered in her own bedroom, at Duchlan castle in the Highlands of Scotland. She died from a shoulder wound and was found huddled  by her bed with a wound to her shoulder. The bedroom door had been locked from the inside – a complex lock created by a former laird had to be removed when the alarm was raised – the closed windows were equally secure. There was almost no bleeding from the wound, there was no weapon to be found and, maybe the most puzzling thing of all, there was a single herring scale in the wound …. 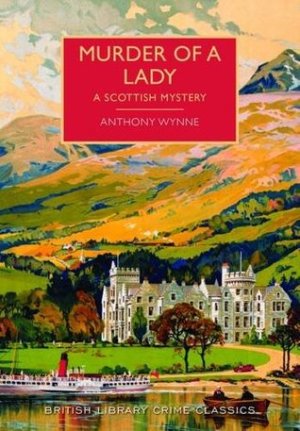 The Procurator Fiscal sent for the police; and he also sent for Doctor Eustace Hailey, who he knew was visiting friends who lived not far from the castle.

Mary Gregor had been a pillar of the community; but it soon became clear that, behind her glossy public image, she had been a hard and controlling woman who had bent all of her family to her own will for years and year.

Watching the characters and the relationships being brought into the light,  watching relationships under great strain as family members suspect each other and try to divert suspicion, was fascinating; and that made this book quite unlike and other Golden Age mystery I can remember.

There was a great deal of incident; there were more seemingly impossible murderers; there was a strong suggestion that supernatural forces had been at work; and there some interesting references to art and culture dropped in.

Thing got a little too melodramatic at times, but the plot, the characters are very well done and that always kept the story on track.

I was sorry that the story was a little over-stuffed with diverse elements; some of them were interesting but some of them had me wishing that the author would get on with solving the mystery.

The solution is very clever – the practicalities were highly improbable, but the logic and the psychology worked – and, though I didn’t see it coming, when I looked back I realised that there had been a few little clues.

Anthony Wynne wrote well, the story was always engaging, and he caught the atmosphere, as unfolding events generated fear and hysteria, very well indeed. That was what held things together, and that was what kept me turning the pages.

I can’t say that this is the greatest Golden Age crime novel; but it is different and it is entertaining.