I told you that spring was coming …. 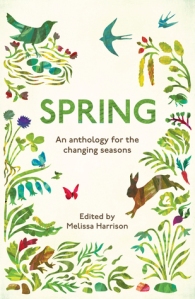 It isn’t here yet. The weather is still cold grey and damp, but the evenings are getting lighter, I’ve seen other signs, and this lovely little book has me convinced.

And, as you may have guessed from the title, there will be another three volumes coming to join it over the course of the coming year.

I loved the idea of the book, of the series, as soon as I read about it; and I was pulled in straight away by the warmth and the understanding of editor Melissa Harrison’s introduction:

“On these temperate island we have been bound to the seasons since time immemorial, dependent on the circling year and its pattern of growth and senescence. That our homes are warm and bright all year round, that we can eat what we want whenever we like are recent developments in evolutionary terms. No surprise, then, that we have not lost, in a few generations, our deep connection to the changing year. Spring’s quickening still quickens us, whether villager or urbanite, farmer or commuter. It’s in our bones.”

I do hope that she is right, and that we aren’t all to caught up in the whirl of living that we don’t appreciate much of what is happening in the world around us.

I try to notice, but it is so very easy to be distracted ….

I know that she is right when she considers literature.

“And the seasons roll through our literature, too, budding, blossoming, fruiting and dying back. Think of it: the lazy summer days and golden harvests, the misty autumn walks and frozen fields in winter, and all the hopeful romance of spring. Sometimes, as with Chaucer’s ‘April shoures’, the seasons are the way to set a scene; sometimes they are the subject-matter itself – but there’s magic in the way a three-hundred year old account of birdsong, say, can collapse time utterly, granting us a moment of real communion with the past.”

The wonderful array of pieces that follow make wonderful sense of those words.

Most are prose, but there is a dusting of poems.

I had forgotten how beautifully Charlotte Bronte wrote of the coming of spring in ‘Jane Eyre’. I had forgotten how lovely it was wen something in the air drew Mole away from his spring cleaning at the very beginning of ‘Wind in the Willows’.

I hadn’t realised that Clare Leighton’s words were as lovely as her art. I hadn’t known that Edward Thomas had stood at Lands End, and written so well about the Cornish climate.

I could mention so many names that you would recognise; some that I might have guessed would be there but many that I had forgotten or would never have expected to be there.

But that is barely half the book; the writing of the past is balanced by contemporary nature writing.

They covered the length and breadth of these islands. After just a few pieces I has been up to the Highlands of Scotland and back home to Cornwall.

I saw so much life in and around a Welsh river; I saw hedgehogs emerge in a country garden at night; I visited a nature reserve in Cambridgeshire, and an RSPB reserve in Cumbria.

It was such a joy to be able to travel the country in this way.

When I looked through the book, wondering which pieces to highlight, I often found it difficult to tell which writing was from the present and which was from the past; such was the quality of the writing and the timelessness of the subject matter.

Because there are so many pieces of prose this book takes a good bit of reading. It’s a book to pick up, to read a piece or two or tree, and then put down again; and then pick up again.

If I had a small niggle, I would have liked a little more poetry and more illustrations that the simple black and white drawing that fill odd spaces.

But the book is lovely as it is. There is nothing in it that doesn’t deserve its place, and I can think of nothing that should be there but isn’t.

It would make a lovely Easter gift.

It’s a book that I know I will enjoy revisiting.

And I don’t want to wish the year away, but I am very curious to see what the next three seasons will bring ….

13 thoughts on “Spring: A Wildlife Trust Anthology for the Changing Seasons”