A year or two ago, at my old home on the internet, and around the time a number of her novels were reissued, we had a lovely celebration of the literary legacy of Margaret Kennedy.

Audrey read ‘The Ladies of Lyndon’ and said:

“When I read the wonderful opening sentence, I knew I was going to love this book. My second thought was that this could be Jane Austen, writing 100 years later.  But looking back, while there are some Jane-ish echoes here, there’s much more snark and bite.”

“I absolutely loved it, at once fully involving myself with the characters, as I became immersed in the world of ‘Sanger’s Circus’. I think Margaret Kennedy might be an author whose work I will have to read much more of.”

Kirsty read ‘Together and Apart’ and said:

“Kennedy discusses familial relationships and their breakdown throughout the novel ….. Together and Apart, even all these years later, is still an important novel, just as relevant to our society today as it was upon its publication.”

Kaggsy read ‘The Feast’ and said:

“Reading “The Feast” was a hugely enjoyable and rewarding experience and I’m so glad I chose it. In fact, I think it will benefit from a re-read as I was so anxious to reach the conclusion that I’m sure there are many profound little bits I’ve missed.”

And I could go on, but that was then and we need to talk about now.

Originally it was my intention to celebrate Margaret Kennedy – and a number of other authors – on their birthdays, but when I started to look I found that the birthdays of the authors that I had in mind were clustered together in small periods of time.

Margaret Kennedy’s birthday fell one day before the date shared by Anthony Trollope and Elizabeth Goudge; and I knew that Lory had a celebration planned for Elizabeth Goudge around that time and that April was quite busy with reading events. So that was out.

When I was looking at her biography and wondering what to do another date caught my eye – the date when she was married.

So this is your invitation to Margaret Kennedy Day on  Monday 2oth June 2016.

There’s no need to RSVP – though it would be lovely to know if you might come –  all you need to do is to read a Margaret Kennedy book between now and then, and post about it on the day!

We have a badge: 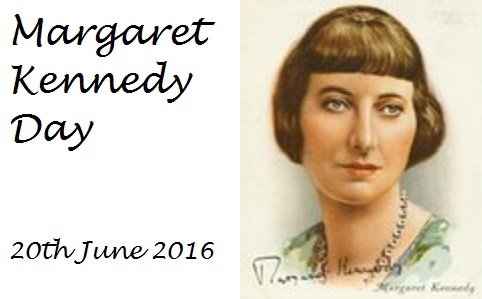 We have a bibliography:

I couldn’t find one definitive source, but I’ve pulled a list together from a number of sources and I think I have pretty much everything that was published in book form.

All of the novels except the last one are in print; and most, but not all, of those titles are print-on-demand.

None of the others are, but, because Margaret Kennedy was hugely successful in the 1920s – and well regarded after that – libraries may well have copes tucked away and there should be used copies out there to be found.

And there is one biography – The Constant Novelist by Violet Powell.

Her novels are quite diverse, so please don’t be put off of you don’t like the sound of one; there may well be another that you’ll love.

And, just is case I haven’t convinced you, here is a lovely piece by her granddaughter, novelist Serena Macksey.

I think that’s everything.

I do hope that you will find a book and be part of Margaret Kennedy Day.

Do tell me, and please ask is you have any questions at all.