…. but there hasn’t been a knitting post for quite some time. 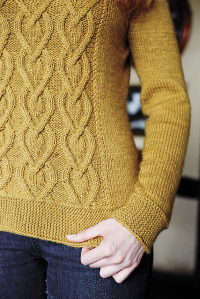 I’ve always liked the look of PomPom Quarterly, but it wasn’t until last autumn that I saw enough that I really wanted to knit to justify ordering a copy. The magazine the arrived was beautifully wrapped and presented, the extra content – over and above patterns – was lovely, though not quite enough to justify a purchase without at least one pattern I had to have.

The pattern that I had to have in last autumn’s issue was Jean by Nadia Crétin-Léchenne; a classic sweater with just enough interesting touches to make it modern and distinctive.

The recommended yarn looked lovely, but I was aware that I had several sweaters worth of double knitting stashed away, and so I pulled a pack of Rowan Purelife Organic Wool out of the airing cupboard. It’s not a favourite yarn – it’s not at all soft and strands resist clinging together – but I thought it would suit the pattern. 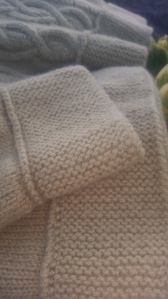 The pattern was clearly written and easy to follow. The cable was simple and once I saw how it worked I hardly had to look at the pattern. I was happier with my second attempt at top-down circular sleeves than the first. I knitted them flat and blanket-stitched the seam, which I find much easier than knitting sleeves attached to a body in the round.

I changed just one thing.

I loved the vertical garter stitch bands, at the bottom and at the cuffs, but the instructions for attaching them were different. The first required picked up stitches and then knitting up the body; the second required knitting in live stiches as you knitted the band. Both valid methods but they looked different, and so when I made my cuffs I knitted the garter stich bands separately, picked up stitches along the edge and grafted those stitches to the live stitches.

It might sound cumbersome, but it was worth doing for the effect.

(I should say that I may have misinterpreted the instructions at some points, because none of the Ravelry project notes I’ve read mention this.)

I thought about changing the neck – I’ve seen some lovely versions of this sweater with a simpler, shorter neckband – but I like a cowl, I had just enough yarn, and so I went for it.

(It helped my decision when I realised that the cowl would cover the join and so I could knit in the live stitches around the neck rather than picking up and grafting.)

I have just one more thing to say about the pattern. My gauge was spot-on, and so I can’t quite understand why it took me a pattern repeat more than the picture in the pattern to reach the required length before starting the armhole shaping. That bothered me for a while, but when I looked at projects on Ravelry and counted repeats I saw that I was in line with other knitters. It does seem strange though.

I just have to say that I am pleased with the finished sweater. I wasn’t entirely pleased when it came off the needles, but a wash and a gentle blocking gave it a little more softness and drape and that made all the difference.

It’s going to be a useful addition to my wardrobe for early spring and late autumn.

I drifted away from the project to do other things, but I’m glad I came back and got this done.

(I know why I drifted away. This is the project that made me realise that I’m happier knitting in pieces and seaming than working on a big piece of knitting in the round on circular needles. The novelty of not having to sew has worn off!)

I can justify starting another sweater now. 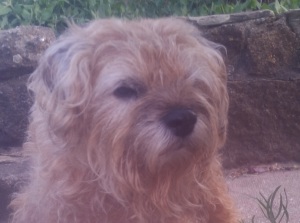 I must find those hats and photograph them.

One day I’ll invest in a decent camera.

But, for now, I’ll leave you with a picture of Briar. Because she followed me out into the garden to see what I was doing, and she was puzzled ….