When a lovely book appeared, the second of four anthologies for four different seasons, I knew that it would hold a wonderful array of perspectives of what summer brings. 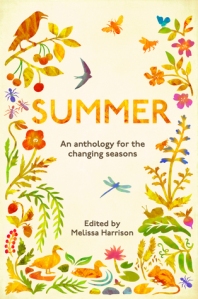 Before I began to read I paused to think what I might say about what the summer brings to me.

It brings lighter evenings, and that means that we don’t have to stay on well-lit streets for the evening dog walk. We can visit the boating pond where Briar loves to jump in the water, and where shoals of tiny fish sometimes catch my eye in the stream. We can visit the gardens where we hear so much bird song, and where Briar has a range of places where she likes to pause for a while to observe whatever might be happening in the undergrowth. Sometimes I watch with her and sometimes I read a book. And we can visit the park, where our progress is similar; there is less bird song but there are squirrels to be observed and chased ….

It brings a new stage in the development of the seagulls who grow up on the roofs of the garages and workshops in out back lane. The chicks grow so quickly and by summer they are almost fully grown, with just their colouring, the last of their fluffiness, and a little uncertainty in their manner to distinguish them from the adults. They are still learning to fly, sometimes falling off roofs, and sometimes walking up the lane, seeing what the world has to offer them. We saw one youngster on the beach a couple of days ago and I think his parents were trying to teach him to swim. One adult was bobbing on the water not far from the shore, one was behind him trying to nudge him in the same direction, but he wouldn’t have it ….

It brings visitors to Cornwall. Many of them are lovely, some of them are horribly insensitive to those of us who live here, and the sheer weight of numbers means that there are many places we avoid in the summer. Luckily we know many places that are a little off the beaten track, and whose appeals are maybe a little more subtle that the places whose names you will know. We love the stark open spaces around Madron Carn;  a walk not far from there that takes in a well, the ruins of a wayside chapel, and a long straight avenue of trees; the paths around the village of Gulval, and the fields above it; a number of walks alongside and nearby the river at St Erth; the steady walk to the top of Chapel Carn Brea, the highest point in West Cornwall; following the stream down the Cot Valley; the salt marshes and a lovely garden walk at Hayle. We went to Hayle yesterday, and I have a lovely image in my head of Briar stood in a stream, fascinated by a dragonfly ….

I found gulls, dragonflies, country walks, and so many other things in this wonderful book. It collects together lots of short pieces, none more than a few pages long. Some of them are old and some of them are new; some of them are complete in themselves and some of them are taken from longer works; and because the credits come at the end of each piece I sometimes found that something I thought was old was new and that something I thought was new was old. Because, of course, some things don’t change and one of the lovely things about looking at the natural world is that we can see the same things and feel just the same as generations who have long gone.

There are a range of different styles – there are storytellers, diarists, poets, reporters and conversationalists within these pages – but the pieces sit together quite naturally because there is much that unifies them. They observe and they communicate, in a way that is accessible to both those at home in the country and those who are interested but don’t really know what it is they are looking at.

There are so may highlights that it is almost impossible to pick favourites. I loved bat watching with Jacqueline Bain. I was taken by surprise by some lovely writing that I would never have guessed was by Charles Dickens. I was pleased to climb a hill in the Cotswolds with Vivienne Hambly; I was delighted that Jo Cartmell wrote of replacing her lawn with meadow flowers, reminding me that I have a plan a little like that for part of our garden; I was very taken with Laurie Lee’s list of some of the things that make a summer; and I was so pleased to take a boat trip with Simon Barnes and his son, who has Downs Syndrome and joie de vivre, and reminded me of my brother who had those things too ….

I’m going to pick out three more now, to balance my three. They’re diverse, they’re vivid, and one after another they captivated me.

Just a few pages from ‘The Charm of Birds’ by Sir Edward Grey communicated his love of his subject, simply and clearly:

“Of all bird songs and sounds there is none that I would prefer to the spring notes of the curlew. I have seen the bird finish its notes on the ground after alighting , but I have not observed if it ever gives them without any flight. As a rule the wonderful note are uttered on the wing, and are the accompaniment of a graceful flight that has motions of evident pleasure. The notes do not sound passionate; they suggest peace, rest, healing, joy, an assurance of happiness past, present and to come. To listen to curlews on a bright, clear April day is one of the best experiences that a lover of birds can have.”

John Tyler provides a stunning account of the short life cycle of a glow-worm, in a narrative that reads like a dystopian thriller:

“When the last sunset colours have disappeared from the sky and the glassy slope behind the brambles has faded from greens to shades of grey, the beetle makes her way to the surface and begins to climb slowly up a grass stem. As she does so a remarkable thing happens. From the tip of her tail a brilliant lime-green light shines out across the colourless hillside. She is a glow-worm! With neither wings to fly nor jaws to feed, her life has now become a race against time. She must use her light to attract a mate and then lay her eggs before the energy reserves that she had saved up during her two years as a snail-eating larva and she starves to death.”

After that it was lovely to relax with a piece written more than a century ago; elegant descriptive writing from ‘Nature Near London’ by Richard Jefferies:

“There is a slight but perceptible colour in the atmosphere of summer. It is not visible close at hand, nor always where that light falls strongest, and if looked at too long it sometimes fades away. But over gorse and heath, in the warm hollow of wheat-fields, and round about the rising ground there is something more than air alone. It is not mist, nor the hazy vapour of autumn, nor the blue tints that come over the distant hills and woods.”

There are so many lovely things that I could pull out from this book.

Some of the pieces spoke to me more than others, but don’t think that there was a single one that wasn’t worthy of its place.

I know that I will enjoy revisiting this beautifully produced anthology.

And I am already wondering what the autumn and winter volumes will bring ….

17 thoughts on “Summer: A Wildlife Trust Anthology for The Changing Seasons”