You may recall that in my last A to Z post I said:

“I’m not really a shawl knitter but I am so taken with the history and the patterns in The Book of Haps.”

Since then I have become a shawl knitter, I’ve knitted my first hap, and I’m considering which pattern from the book I should knit next.

I should say that a shawl and a hap are not one and the same; the question of just what the distinction is is complex, but the general consensus seems to be that a hap is a more practical, everyday kind of wrap.

The book mixes knitting history with a wonderful range of hap patterns, and if that has you curious I’ll point you towards Ravelry and towards Hayley’s review of the book rather than ramble for too much longer. 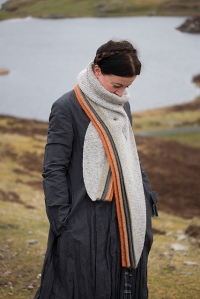 Many patterns called to me, but the pattern that called me loudest  was Nut-Hap by Jen Arnall-Culliford .

I loved that it was inspired by birds; the shaping resembling a wing, the tucks lying over one another like feathers, and the colours inspired by the nuthatch. I was pleased that it was a wonderfully wearable piece, knitted with Rowan Felted Tweed – a yarn I love. I was interested that it made use of techniques I kind of knew but could do with practicing – a tubular cast-on, short rows and tucks. But it was the prospect of finding my own bird and colour scheme – and a knitalong – that made it a must-start-right- now kind of project.

I knew what kind of bird I wanted. I wanted a one that would allow me to make my main colour a strong one. I didn’t want anything too exotic; I wanted a bird a might see one day on the beach or in the country. A few possibilities slipped away because the colours were too neutral or I couldn’t match them to the yarn, but it didn’t take too long for me to find my bird. 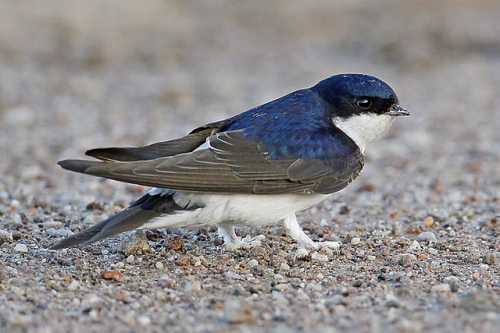 The house martin was perfect. The lovely blue on the crown of this head and his back could be my main colour, and the tucks in creamy white, black and two shades of brown would complete the picture. I ordered yarn, I located two very long cables and the right sized tips, and when the yarn arrived I put aside my work in progress and stated straight away.

This wasn’t the largest thing I’ve knitted but it is definitely the longest, and I’ve never made a wrap from a sweater’s worth of yarn before. That was the only difficult thing, manoeuvring such long needles, particularly when stitches were being divided between the two or coming together again on one. The pattern suggested doing those things and working the stitches at the same time, but I found that very awkward and after a few incidents I decided to do one thing at a time. Arrange the stitches and then work them. That might have been a little slower, but it was so much easier.

The provisional cast-on gave a lovely edge, but it was a struggle with so many stitches. I hadn’t used the technique for a long time and, with the benefit of hindsight, I think I should have practiced on a smaller piece – a hat maybe – first. There are quicker methods – an alternate cable cast-on gives a quite similar result – but I do think that this one is worth the extra effort. 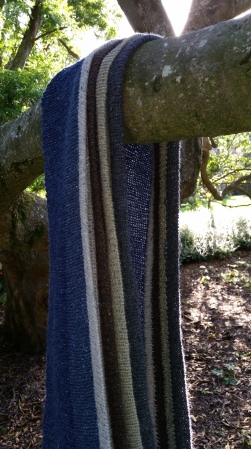 After that I was off, knitting miles and miles of rib with short-row shaping. The pattern suggested wrap and turn but I went for Japanese short rows. I’d been wary of them when a read about using strands of yarn as markers, but I learned a while ago that I could use lockable stitch markers of safety-pins instead, and that they were much simpler that I thought. I tried them and I loved them; particularly that because they were marked I knew exactly where that were.

That stage took ages; I liked that look of it, I enjoyed seeing that shape emerge, but I was so happy when it was over.

The tucks were so simple – separate the knits and the purls, work stocking stich on the knits, bring them back together to create the tuck, then work a few rows of rib and start the process again with a new colour. This phase was so much quicker!

The piece is completed by grafting the knits and purls together. Again the process took time, but it was definitely worth it. The sequence of moves had never quite lodged in my head but after bringing so many stitches together I think it’s fixed now. 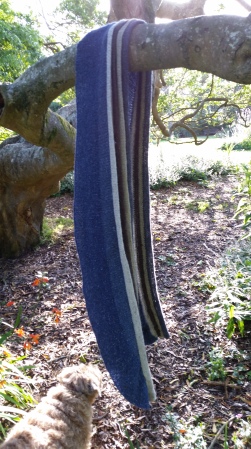 The finished hap? I’ve never knitted anything else quite like it, I love it, and I appreciate what I’ve learned from it.

I took it out to the Morrab Gardens to photograph a day before the end of the knit-along. And since then the weather has either been too warm to wear it or too damp and grey to take decent pictures.

I’ve thought of knitting another one in different colours, but if I do that won’t be for quite some time.

Because I realised that what I really wanted was to take more colour schemes from nature. I don’t have a good eye for that sort of thing, and I am so pleased that this project taught me that I can look at the world around me and put colours together that way. A few days ago, when I was out with Briar, I took a picture of the beach at low tide: blue sea, brown and grey rocks, yellowy-green seaweed …. I can match the colours and I have a pattern in mind ….

15 thoughts on “Happiness is Hap Shaped: I have been knitting!”