Could you resist an exhibition with a title like that – borrowed from Tennyson?

I know I’m not entirely objective; because the exhibition is at Penlee House, just five minutes walk from home; and because I was raised by the sea in Cornwall, because the sea always calls me back and fills me with awe and wonder, with love and just a little fear at how very powerful it is.

But I can say that this exhibition spoke to me of the sea I have looked out at for most of my life in every light, every mood, every weather. And it reminded me that, though some things change, many things remain the same.

I don’t really speak the language of art, but I’d love to show you some of the paintings and tell you some of my thoughts. 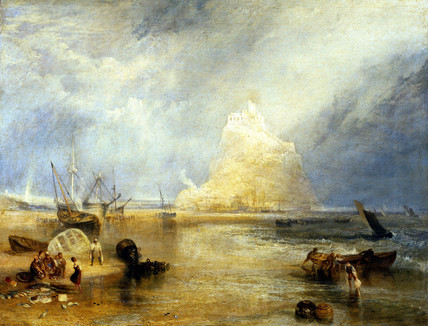 Turner’s painting of St Michael’s Mount made a striking poster to advertise this show, and it is the first thing you see as you step through the door. It was smaller than we expected, but it was so striking and the subject was unmistakeable. I was amazed to learn that it was painted from sketches from the artist’s only visit to Cornwall, nearly quarter of a century before the date of the painting. The Mount was never quite that tall, but I’ve seen in in light like that, from nearly the same angle but rather further away. It is quite extraordinary that such light can be held in the memory and then expressed in paint.

Turner’s work set next to a very different painting of the same subject. This one has a touch of the picture-postcard about it, but it is as true a picture of our local landmark.

I observed that both artists had chosen the same angle, and The Man of The House explained that east wing of the castle hadn’t been built then and so there would be little to see from the other side. He knows these things because he lived there in the latter years of his childhood – his family lived in one of the harbour cottages you can pick out in Luny’s painting – and he followed in his father’s footsteps, becoming a castle guide for a while.

The next painting I must show you was on the opposite side of the room.

It took me to a part of the coast I know well and I could sit there – or I could sit looking at that painting for a very long time.

There was a smaller painting by the same artist, and if you look at the rocks in the sea – The Brissons – in that painting and in the painting below – a painting I love but have yet to see – you can see that John Brett must have walked and must have loved that stretch of coast too.

‘The Beach at Land’s End, Cornwall’ by John Brett

That was the first room. I can’t show you all of the paintings, because there were so many of them, and because many of them were borrowed from private collections and for that reason – and in some cases for other reasons – they are not to be seen anywhere else.

In between the two rooms there was an array of smaller pieces. There were drawings and etchings. More sketches by Turner, who clearly right around the Cornish coast. And an etching of Queen Victoria’s visit to St Michael’s Mount by local artist Richard Pentreath. I noticed that he chose the same angle as Turner and Luny ….

The paintings in the second room were later. There were a few familiar names – from the Newlyn School and the St Ives School – but there were many names that were new to me. 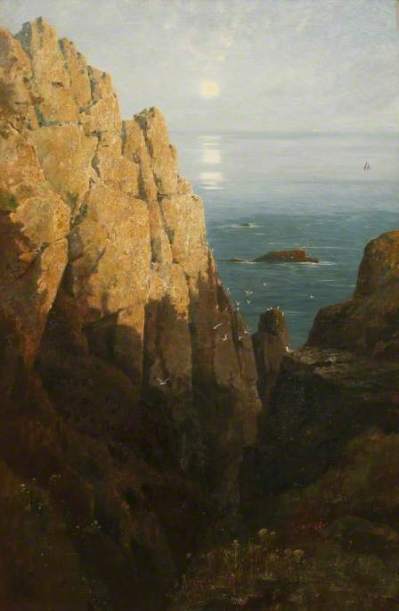 These artists filled whole canvases with sea wonderfully well.  I saw new Cornish names, and I saw paintings by artists from America, from Canada and from Australia who had come to Cornwall to paint. I saw places I knew, and places I thought I knew but couldn’t quite place. It was almost too much.

The Man of the House was particularly pleased to see an Alfred Wallis. I can’t say that was one of my favourites from this show, but I noticed how very well this naïve artist caught the movement of boats over the sea.

My favourite painting from the second room was this one.

I pulled The Man of the House right back across the room to see how brilliantly it caught the light.

There’s just one more painting I must show you. It captures another side of the sea, and the relationship between man and the sea; and as the exhibition takes its title from Tennyson it seems right to finish with a painting that takes its name from his work. 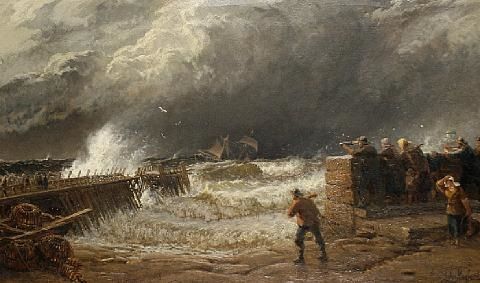 Compass’d by the Inviolate Sea continues until 3rd September 2016.

15 thoughts on “Compass’d by the Inviolate Sea: Marine Painting in Cornwall from Turner to Wallis”