This book caught me by surprise.

I’ve read some of Ann Patchett’s work but it’s been a long time since our last encounter; because I’ve liked what I’ve well enough to want to read more, but not quite well enough for months and years to slip by before a book landed that I thought I really must read.

Because this is a story of families, a story of lives lived, it would be very easy to say too much about people I met in this book who were so very real, and so I am going to spin my thoughts around the four paragraphs that I read before I started to read the book itself.

“One Sunday afternoon in Southern California, Bert Cousins shows up at Franny Keating’s christening party uninvited. Before evening falls, he has kissed Franny’s mother, Beverly—thus setting in motion the dissolution of their marriages and the joining of two families.”

This is the first chapter, and it is so accomplished. The story is simple, and it could be read quite simply and naturally, but it reveals much. Bert had a conversation at work with someone who thought that he had been invited, but he hadn’t, because he was a newcomer to the area and had barely met Fix Keating. He hadn’t intended to go, but spending Sundays at home with his pregnant wife and their three young children made him feel trapped; and so when he thought of the party he saw a chance of escape and seized it, plucking an unopened bottle of gin from his drinks cabinet as a rather unconventional christening gift as he went. 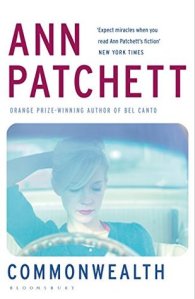 Fix welcomed him and drew him into the throng. The bottle of gin was warmly received and it changed the tone of the party. Bert relaxed and his delight in the oranges that were being squeezed to mix with his gin – locals took orange trees for granted but they were still a novelty to him – drew him right into the company. It was quite natural for Fix to ask him to look out for his wife, for Bert to respond to Beverley’s beauty, for her to respond to that and accept a kiss ….

The story lived and breathed, it felt to utterly real, and I could see so clearly what happened and why, and what the consequences might be.

It could have been an exceptional short story, but it was just an introduction.

“Spanning five decades, Commonwealth explores how this chance encounter reverberates through the lives of the four parents and six children involved. Spending summers together in Virginia, the Keating and Cousins children forge a lasting bond that is based on a shared disillusionment with their parents and the strange and genuine affection that grows up between them.”

The chapters that followed moved between those four adults and six children. I was struck by how well the author delineated those characters, how well every one of those characters was drawn, how she allowed me to really know each one of them.

It acknowledges how difficult it is to be a parent; and how parents can affect children before, ultimately, they have to take responsibility for their own lives.

The story swung so naturally between different characters and different times. It was a masterful study of the consequences of divorce and remarriage on the two families is masterful; and I appreciated that it showed that so many things shape lives, that there is chance as well as consequence.

I was struck by how well the characters and their relationships evolved, how the balance between the generations shifted, and that there were no heroes and villains; just complex, fallible human beings.

“When, in her twenties, Franny begins an affair with the legendary author Leon Posen and tells him about her family, the story of her siblings is no longer hers to control. Their childhood becomes the basis for his wildly successful book, ultimately forcing them to come to terms with their losses, their guilt, and the deeply loyal connection they feel for one another.”

There are many different moods, many different emotions in the chapters of this book. Because each character has a different position in their family and a different role in events; and so they react differently and make different choices in life. They come together though, to make a coherent whole.

Nothing is quite as striking as the opening chapter, but I was particularly taken with the account of the meeting of Franny – who was wonderfully bookish – with the famous author; and its consequences, some predictable and some not.

This passage captures their relationship perfectly:

“Other than the difference in their ages, and the fact that he had an estranged wife, and had written a novel about her family which in its final form made her want to retch even though she had found it nothing less than thrilling when he was working on it, Franny and Leo were great.”

The existence and the success of that novel brought another dimension to the story; the problems created by the fictionalised family history, the truths that it brings to light, and the differing reactions to having their story retold are fascinating.

I was only sorry that I couldn’t spend a little more time with some of them. The points in their lives that I was allowed to visit gave me a wonderful understanding, but there were life stories that were strands within this novel that could so easily of been centre-pieces.

I’m thinking particularly of Albie, the child who would be born not long after Franny’s christening party ….

“Told with equal measures of humour and heartbreak, Commonwealth is a meditation on inspiration, interpretation, and the ownership of stories. It is a brilliant and tender tale of the far-reaching ties of love and responsibility that bind us together.”

There were so many incidents and details that have stuck in my mind, and I almost feel that I should be talking them over with someone else who has meet the characters, or maybe even with the characters themselves.

I can’t do that, and so I will simply say that this is a wonderfully engaging human story, and that it held me from the first page to the last.