I wasn’t at all sure how to explain how I felt about this book, until I thought of this:

“Imagine that you found an old battered box of books tucked away in an attic. The books had been tossed in, in a fairly haphazard way, and as you inspected them one by one you found that you had some absolute gems, some rather ordinary books, and some books that looked rather odd and that you wouldn’t be quite sure about until you had examined them much more closely. You would be bemused as to what sort of person would put away a selection of books like that, but you would be very curious to know more about them and what else they might have read. And, though you wouldn’t claim to have found the  best box of books ever,  you would be very glad that you did find it…”

I hope that makes some kind of sense.

Rachel Ferguson begins, conventionally enough you might think, by describing a house; it’s history and it’s inhabitants. Her writing though is anything but conventional. It comes in wonderfully complex, elaborate and discursive sentences; each one is a wonderful construction, loaded with facts and descriptions, inferences and opinions; and they come tumbling down one after another, in a way that feel entirely natural and right.

“There are denes, priories, castles and manors, in the rooms, galleries and grounds of which Catherine Howard still screams and Jane Grey had pricked her finger, Bloody Mary exclaimed ‘God’s death!’ Raleigh had smoked the first pipe of tobacco, Charles the Second hidden in an oak tree, someone else had signed something historic and damaging, Barbara Castelmaine had threatened to throw herself out of the window and Prince Arthur had actually done so; where the Queen of Scots had given away trinkets to faithful retainers and Wolsey had all of his taken from him. And there are English families with fairy banners and ‘lucks’ famed in ballads, and others of equally ancient lineage and no luck at all. One contingent still entertains the autumnal shooting party and is pictured in the papers filing like portly Sherlock Holmeses across the moors, while the second party emerges from posterns at sunset and hopefully pops away at rabbits for the larder on their own mortgaged estates.

And somewhere in England, in rating between the extremes of screaming queen and the pedigree’d pursuit of pot-luck stands Delaye, seat of the Roundelays, presently occupied by Sir Edmund Roundelay, his family and various collaterals.”

Others have written this way, but none of them that I have read have written in quite the way that Rachel Ferguson has here.  I believed that her voice rang true, I believed that she had a point of view, and I loved it. She gave everything such depth, and I came to know the house and the people who lived and worked there so well. 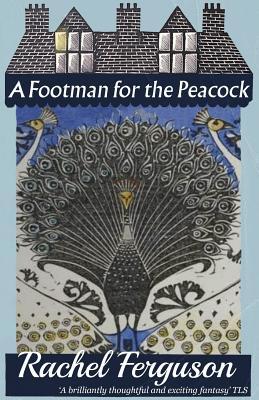 The men of the house were Sir Edmund Roundelay, who hadn’t expected to inherit the estate and wasn’t entirely sure why he had been knighted; his son and heir, Stacey, who was temporarily exiled to learn estate management at agricultural college; and his cousin, Maxwell, who had some to stay when he left the army and his horrified mother decided not to come home.

The women were Evelyn, Lady Roundelay, who hadn’t expected to live in a country house and was rather taken by it; their two daughters, Margaret who was practical, and Angela, who was sensitive; three unmarried great-aunts, Miss Amethyst, Miss Sapphire and Miss Jessie, who had lived in the house all of their lives and continued to follow the customs that knew as young women; and Nursie who had a wonderful sense of her own importance and was clearly sliding into some kind of dementia.

There were some lovely digressions into the interests and concerns of that marvellously diverse band of characters.

But I couldn’t help feeling that this book was missing a plot.

When war broke out it seemed that the story was beginning. The Roundelays were horrified that they might have to take evacuees into their home and did their level best to escape responsibility; they were not amused by the call for blackouts, and considered it wholly unreasonable that they should have to find materials to cover their windows themselves; they went just as appalled to find that they were expected to travel to the nearby village of Rohan to have gasmasks fitted; and they really didn’t understand why the butcher could not provide meat for their table,

Evelyn’s sister set letters from London, telling her what was happening, and what she was doing for the war effort, but still they didn’t understand. They were oblivious, completely failing to appreciate why the country was at war, what others might be going through, and why it might be incumbent on them to play any part.

The satire was biting.

But the portrayal of the household staff and the residents of Rohan made it clear that the gentry was not the author’s only target. She indicated, rather more gently, that the people around them were happy with – or at least accepted – the status quo, and expected it to continue.

There is also the matter of the running footman and the peacock to consider.

I had a idea of what a running footman was. A superior kind of errand boy I thought, but I was wrong. The job was much more onerous.

“… to footslog over hill, over dale, through bush, through briar, herald and warning to the approaching town or hamlet or to any pedestrian that the coach of his master was imminent, and that a way for it must instantly be cleared. Hardly human, the running footman was more in the nature of a social gesture to the world at large, an earnest of the importance of the family he served, a panting castemark. Without change of linen at the end of a heating run in all weathers, including winter’s snows, the running footman must wait for hours in the kitchen, steaming in front of the open hearth, before word was brought him via a chain of house servants, that his family above-stairs had concluded its visit. He then took staff and nerved himself for the return footslogging. Oh yes, these fellows, poor devils, died off like flies of consumption—the local graveyards were known to be peppered with them. Pay? Oh, five pounds a year, livery and all found. And, oh yes, it might interest Sir Edmund’s visitors to know that the staff borne by these footmen possessed a metal cap at the tip in which was placed one hard boiled egg to sustain them during the runs …”

Angela thought so, and events might prove her right.

I loved this fanciful and illuminating aspect of the story; but, other than illustrating that the Roundelays had always been unthinkingly cruel, it didn’t really sit naturally with the rest of the book.

That was my problem with this book. The whole was less than the sum of the parts, because the parts didn’t work together as well as they might have.

There were moments of brilliance, but there were also some quiet spells when I couldn’t help thinking that this book needed an editor with a very firm hand.

I’m delighted that I read it though, because I found so much to love: wonderful and distinctive writing, masses of lovely details, and characters, incidents and opinions that struck me in so many different ways.

And because I don’t think I’ve ever read a book quite like it.