I have been picked up, shaken, spun around, and then dropped in a crumpled heap by life. That is the consequence of both those huge things that will affect the whole world, that I know you know about already; and of things that seem small to the world but enormous to me because are so very close to me.

I don’t know what the future might hold, but I think things might settle down for a while, and I’ve realised  that the best thing I can do is to dust myself down and carry on; celebrating the things that illuminate our lives. Books, art, crafts, nature, dogs ….

Let’s start with another celebration of the art that adorns the covers of some of my favourite books.

Because the covers are lovely, but the paintings really come alive when they are released from their green frames. Sometimes just a detail has been chosen, or the painting has been cropped because it wasn’t book-shaped.  That may be the best way to make a good cover for a book, but it shouldn’t be the only way we see the art-work.

It’s difficult to pick favourites, but I have to say that this is such a striking image.

‘Cassandra at the Wedding’ by Dorothy Baker (#67)

‘It is the hottest June 21st since 1912, and the longest day of the year. Casandra Edwards-tormented, intelligent, mordantly witty – leaves her doctoral thesis and her Berkeley flat to drive through the scorching heat to her family’s ranch. There they are all assembled: her philosopher father smelling so sweetly of five-star Hennessey, her kind, fussy grandmother, her beloved, her identical, her inseparable (soon to be separated) twin sister Judith. For the occasion is Judith’s marriage to a young Connecticut doctor; though it won’t be if Cassandra can help it …’

This came before the better known television tie-in edition

‘Under the watchful gaze of their Black nurse Lally, three white Creole girls grow up at Maison Rose on the Island of Dominica, with its glades of glittering live trees , flaring hibiscus and milky-scented frangipani. But this drowsy heat-drenched lushness conceals decay, and the orchid house echoes with the strange whispered secrets of their enclosed world. To survive, the girls must abandon their island of disease and beauty for the cold northern lands of England and America. Lally watches as they leave, one by one, and waits for their return. As return they must – to their magic past, to the orchid house, and to the man whom all three sisters love…’

The writer, the artist, the knitwear: all Scottish

‘Ellen Carstairs has spent two glorious years as a student in Frankfurt. Returning to Glasgow to teach music, she begins a journal for her college friend Ruby. Here she pours out her observations, her ambition to write and her frustrations. For the oppressive and religious attitudes of her peers are a great contrast to Ellen’s own enlightened views about sex and independence. First published in 1922, this semi-autobiographical novel is a lively and sympathetic portrait of a young women’s ideals. Ellen’s engagement to Duncan, a young doctor, threatens to distance her from the freedom she seeks, but her friendship with a poor, ascetic scholar helps Ellen to realize that she must not be moulded by convention.’

‘South of France’ by Duncan Grant

‘Death Comes for the Archbishop’ by Willa Cather (#58)

‘One summer evening in the year of 1848 three Cardinals and a missionary, dining in a villa near Rome, decide the fate of a simple parish priest, the Frenchman Jean Marie Latour. He is to go to New Mexico to win for Catholicism the South-West of America, a country where the Faith has slumbered for centuries. There, together with his old friend Father Vaillant, Latour makes his home. To the carnelian hills and ochre-yellow deserts of this almost pagan land he brings the refined traditions of French culture and Christian belief. Slowly, gently he reforms and revivifies, after forty years of love and service achieving a final reconciliation between his faith and the sensual peasant people of New Mexico: a harmony embodied in the realisation of his most cherished dream – a Romanesque cathedral, carved from the Mexican rock, gold as sunlight.’ 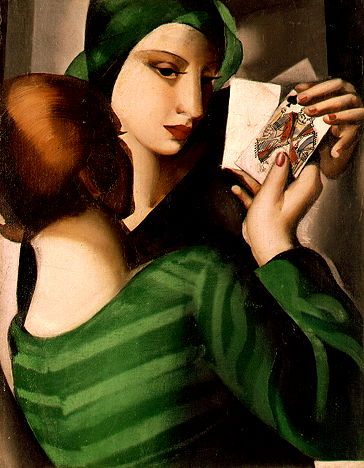 ‘First published in New York newspapers between 1914 and 1916 these fourteen incisive tales wonderfully evoke Greenwich Village Bohemia of that time. Sketched with an exquisite and decadent pen are lovers and loners, schemers and dreamers, terrorists and cowards, and many, many more. There’s the terrible ‘Peacock’, a ‘slinky female with electrifying eyes and red hair’ whom all men pursue but cannot entice; Paprika Johnson softly playing her pawnshop banjo above Swingerhoger’s Beer Garden and Mamie Saloam the dancer who ‘became fire and felt hell’. There’s Clochetter Brin who ‘knew that love and lottery went together’, the silent Lena whose stolid appearance disguised her animal spirit and the cunning Madeleonette whose lovers enact the most dramatic rite of all.’

‘The Bay’ by Thea Proctor

‘It is 1933. Jessica and Jane have been living together for six months. They are devoted friends — or are they? Jessica, with her dark charm, has a vicious way with words and a temperament that inclines towards violence.  She loves her friend with the cruelty of total possessiveness; Jane with her geometric lines and blonde hair, is perfect – but for the thread of a scar by her mouth.  She is rich and silly and drinks rather too many brandy and sodas. Their friend Sylvester regrets that she should be ‘loved and bullied and perhaps even murdered by that frightful Jessica’, but decides it’s none of his business. However, when the Irish gentleman George Playfair meets Jane, he decides it’s very much his business.  He entices Jane to Ireland where the battle for her devotion begins. It will be a fight to the death. But who will win?’

The only instance of writer and artist being one and the same, I think

‘The Seventh Horse & Other Tales’ by Leonora Carrington (#326)

‘From the land of Grimm, Lewis Carroll and Lear, from a place of shadows and glistening jewels come these tales: hallucinatory, hilarious, peopled with wolves, hyenas and giant white poodles. Since the first appearance of Leonora Carrington’s stories in the late 1930s, a group of admirers has been tracking down the work which she herself, travelling continents and writing in three different languages, slougheed off like the skin of a snake. At last, her uncollected short fiction is bought together for the first time. Including such classics as “White Rabbits”, “The Neutral Man”, a story version of “The Stone Door”, tales published in Mexican literary magazines, or previously unpublished, and many early French stories discovered amongst the papers of Max Ernst after his death, this spellbinding collection is for the surreal corners of everyone’s heart.’

13 thoughts on “A Walk Through the Virtual Virago Art Gallery”