One of the most beautiful of Church festivals comes in midwinter when nights are long and days are short, when the sun slants towards earth obliquely and snow mantles the fields: Christmas.

From ‘Rock Crystal’ by Adalbert Stifter

I am very busy preparing for Christmas, but have often locked myself up in a room alone, shutting out my unfinished duties, to study the flower catalogues and make my lists of seeds and shrubs and trees for the spring. It is a fascinating occupation, and acquires an additional charm when you know you ought to be doing something else, that Christmas is at the door, that children and servants and farm hands depend on you for their pleasure, and that, if you don’t see to the decoration of the trees and house, and the buying of the presents, nobody else will. The hours fly by shut up with those catalogues and with Duty snarling on the other side of the door. I don’t like Duty—everything in the least disagreeable is always sure to be one’s duty. Why cannot it be my duty to make lists and plans for the dear garden? “And so it is,” I insisted to the Man of Wrath, when he protested against what he called wasting my time upstairs. “No,” he replied sagely; “your garden is not your duty, because it is your Pleasure.”

What a comfort it is to have such wells of wisdom constantly at my disposal! Anybody can have a husband, but to few is it given to have a sage, and the combination of both is as rare as it is useful. Indeed, in its practical utility the only thing I ever saw to equal it is a sofa my neighbour has bought as a Christmas surprise for her husband, and which she showed me the last time I called there—a beautiful invention, as she explained, combining a bedstead, a sofa, and a chest of drawers, and into which you put your clothes, and on top of which you put yourself, and if anybody calls in the middle of the night and you happen to be using the drawing-room as a bedroom, you just pop the bedclothes inside, and there you are discovered sitting on your sofa and looking for all the world as though you had been expecting visitors for hours.

From ‘Elizabeth and her German Garden’ by Elizabeth Von Arnim

At last the Rat succeeded in decoying him to the table, and had just got seriously to work with the sardine-opener when sounds were heard from the fore-court without—sounds like the scuffling of small feet in the gravel and a confused murmur of tiny voices, while broken sentences reached them—”Now, all in a line—hold the lantern up a bit, Tommy—clear your throats first—no coughing after I say one, two, three.—Where’s young Bill?—Here, come on, do, we’re all a-waiting—”

“What’s up?” inquired the Rat, pausing in his labours.

“I think it must be the field-mice,” replied the Mole, with a touch of pride in his manner. “They go round carol-singing regularly at this time of the year. They’re quite an institution in these parts. And they never pass me over—they come to Mole End last of all; and I used to give them hot drinks, and supper too sometimes, when I could afford it. It will be like old times to hear them again.”

“Let’s have a look at them!” cried the Rat, jumping up and running to the door.

It was a pretty sight, and a seasonable one, that met their eyes when they flung the door open. In the fore-court, lit by the dim rays of a horn lantern, some eight or ten little field-mice stood in a semicircle, red worsted comforters round their throats, their fore-paws thrust deep into their pockets, their feet jigging for warmth. With bright beady eyes they glanced shyly at each other, sniggering a little, sniffing and applying coat-sleeves a good deal. As the door opened, one of the elder ones that carried the lantern was just saying, “Now then, one, two, three!” and forthwith their shrill little voices uprose on the air, singing one of the old-time carols that their forefathers composed in fields that were fallow and held by frost, or when snow-bound in chimney corners, and handed down to be sung in the miry street to lamp-lit windows at Yule-time.

Villagers all, this frosty tide,
Let your doors swing open wide,
Though wind may follow, and snow beside,
Yet draw us in by your fire to bide;
Joy shall be yours in the morning!

Here we stand in the cold and the sleet,
Blowing fingers and stamping feet,
Come from far away you to greet,
You by the fire and we in the street,
Bidding you joy in the morning!

For ere one half of the night was gone,
Sudden a star has led us on,
Raining bliss and benison,
Bliss to-morrow and more anon,
Joy for every morning!

Goodman Joseph toiled through the snow,
Saw the star o’er a stable low;
Mary she might not further go,
Welcome thatch, and litter below!
Joy was hers in the morning!

And then they heard the angels tell
“Who were the first to cry Nowell?
Animals all, as it befell,
In the stable where they did dwell!
Joy shall be theirs in the morning!”

The voices ceased, the singers, bashful but smiling, exchanged sidelong glances, and silence succeeded—but for a moment only. Then, from up above and far away, down the tunnel they had so lately travelled was borne to their ears in a faint musical hum the sound of distant bells ringing a joyful and clangorous peal.

“Very well sung, boys!” cried the Rat heartily. “And now come along in, all of you, and warm yourselves by the fire, and have something hot!”

“Yes, come along, field-mice,” cried the Mole eagerly. “This is quite like old times! Shut the door after you. Pull up that settle to the fire.”

From ‘The Wind in the Willows’ by Kenneth Grahame 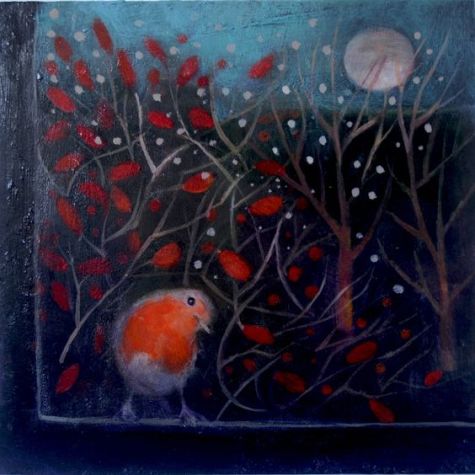 Hilda Effania always left notes for the girls, explaining where their Christmas present from Santa was. This practice began the first year Sassafrass had doubted that a fat white man came down the chimney to bring her anything. Hilda solved the problem by leaving notes from Santa Claus for all the children. That way they had to search the house, high and low, for their gifts. Santa had surely been there. Once school chums and reality interfered with this myth, Hilda continued the practice of leaving her presents hidden away. She liked the idea that each child experienced her gift in privacy. The special relationship she nurtured with each was protected from rivalries, jokes and Christmas confusions.  Hilda Effania loved thinking that she’s managed to give her daughters a moment of their own.

In the back of the pantry is something from Santa. In a red box by the attic window is something your father would want you to have. Out by the shed in a bucket covered with straw is a gift from your Mama.

Underneath my hat boxes in the 2nd floor closet is your present from Santa. Look behind the tomatoes I canned last year for what I got you in your Papa’s name. My own choice for you is under your bed.

This is going to be very simple. Santa left you something outside your violin. I left you a gift by the outdoor stove on the right hand side. Put your coat on before you go out there. And the special something I got you from your Daddy is way up in the china cabinet. Please, be careful.

I love you so much,

From ‘Sassafrass, Cypress and Indigo’ by Ntozake Shange

Christmas Day passed very quietly. The men had a holiday from work and the children from school and the churchgoers attended special Christmas services. Mothers who had young children would buy them an orange each and a handful of nuts; but, except at the end house and the inn, there was no hanging up of stockings, and those who had no kind elder sister or aunt in service to send them parcels got no Christmas presents.

Still, they did manage to make a little festival of it. Every year the farmer killed an ox for the purpose and gave each of his men a joint of beef, which duly appeared on the Christmas dinner-table together with plum pudding – not Christmas pudding, but suet duff with a good sprinkling of raisins. Ivy and other evergreens (it was not holly country) were hung from the ceiling and over the pictures; a bottle of homemade wine was uncorked, a good fire was made up, and, with doors and windows closed against the keen, wintry weather, they all settled down by their own firesides for a kind of super-Sunday. There was little visiting of neighbours and there were no family reunions, for the girls in service could not be spared at that season, and the few boys who had gone out in the world were mostly serving abroad in the Army.

There were still bands of mummers in some of the larger villages, and village choirs went carol-singing about the countryside; but none of these came to the hamlet, for they knew the collection to be expected there would not make it worth their while. A few families, sitting by their own firesides, would sing carols and songs; that, and more and better food and a better fire that usual, made up their Christmas cheer.

From ‘Lark Rise to Candleford’ by Flora Thompson

It began with the Christmas tree lights. They were candy-bright, mouth-size. She wanted to feel the lightness of them on her tongue, the spark on her tastebuds. Without him life was so dark, and all the holiday debris only made it worse. She promised herself she wouldn’t bite down.

From ‘The Rental Heart and Other Fairytales’ by Kirsty Logan 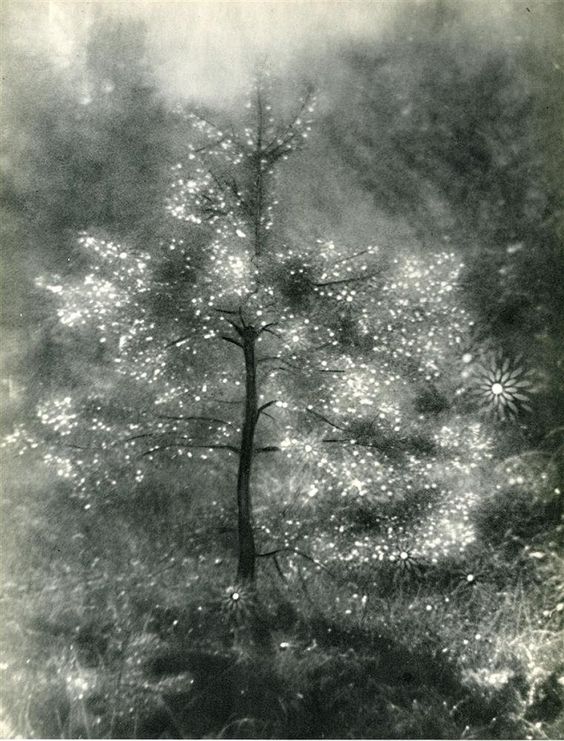 Sing hey for the moon and the starry sky,
The river, the wood and the sea,
For the fish and the birds and the animals all,
And the grass so green on the lea,
But most of all for the fair Christmas rose
And the lights on the candled tree.

Sing hey for the chimney and the roof-tree wide,
Sing hey for the walls and the floor,
For the warmth of fire on the glowing hearth
And the welcoming open door,
But most of all for the peace and goodwill
And the joy at our deep heart’s core.

Sing hey for the God who fashioned for us
This bountiful splendour of earth,
Sing hey for courage and wisdom and love,
For beauty and healing and mirth,
But most for the Child Who on Christmas Day
Took upon Him our human birth.

From ‘The Herb of Grace’ by Elizabeth Goudge

15 thoughts on “A Collection: With Love for Christmas”