Afternoons seem unending on branch-line stations in England in summer time. The spiked shelter prints an unmoving shadow on the platform, geraniums blaze, whitewashed stones assault the eye. Such trains as come only add to the air of fantasy, to the idea of the scene being symbolic, or encountered at one level while suggesting another even more alienating.

Once the train which had left them on the platform had drawn out, the man and the woman trod separately up and down, read time-tables in turn, were conscious of one another in the way that strangers are, when thrown together without a reason for conversation. A word or two would have put them at ease, but there were no words to say. The heat of the afternoon was beyond comment and could not draw them together as hailstones might have done. They had nothing to do, but to walk up and down or sit for a moment on the blisteringly-hot, slatted seat.

From ‘A Wreath of Roses’ by Elizabeth Taylor 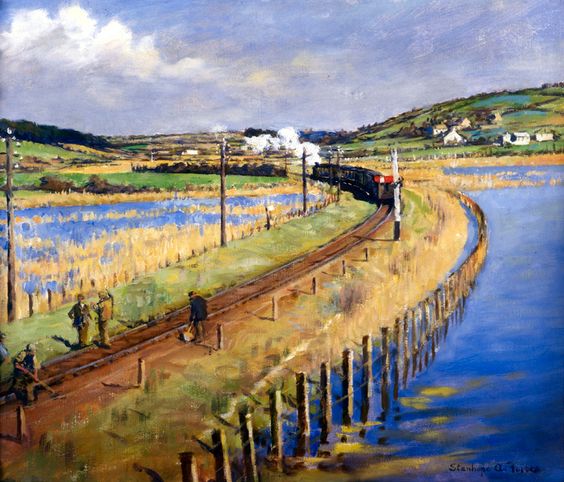 ‘Through the Marshes’ by Stanhope Forbes

Faster than fairies, faster than witches,
Bridges and houses, hedges and ditches;
And charging along like troops in a battle,
All through the meadows the horses and cattle:
All of the sights of the hill and the plain
Fly as thick as driving rain;
And ever again, in the wink of an eye,
Painted stations whistle by.

Here is a child who clambers and scrambles,
All by himself and gathering brambles;
Here is a tramp who stands and gazes;
And there is the green for stringing the daisies!
Here is a cart run away in the road
Lumping along with man and load;
And here is a mill and there is a river:
Each a glimpse and gone for ever!

‘From a Railway Carriage’ by Robert Louis Stevenson

The novel begins in a railway station, a locomotive huffs, steam from a piston covers the opening of the chapter, a cloud of smoke hides part of the first paragraph. In the odour of the station there is a passing whiff of station café odour. There is someone looking through the befogged glass, he opens the glass door of the bar, everyting is misty, inside too, as if seen by near-sighted eyes, or eyes irritated by coal dust. The pages of the book are clouded like the windows of an old train, the cloud of smoke rests on the sentences.

When books are pow’rless to beguile
And papers only stir my bile,
For solace and relief I flee
To Bradshaw or the ABC
And find the best of recreations
In studying the names of stations. 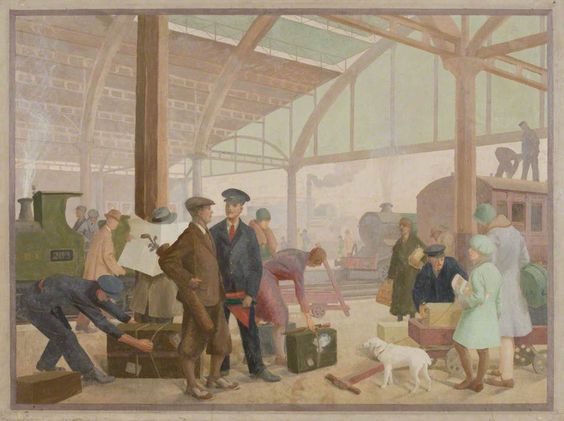 ‘The Station, 1930’ by Lilian Gladys Tickell

The train slows and lengthens, as we approach London, the centre, and my heart draws out too, in fear, in exaltation. I am about to meet–what? What extraordinary adventure awaits me, among these mail vans, these porters, these swarms of people calling taxis? I feel insignificant, lost, but exultant. With a soft shock we stop. I will let the others get before me. I will sit still one moment before I emerge into that chaos, that tumult. I will not anticipate what is to come. The huge uproar is in my ears. It sounds and resounds under this glass roof like the surge of a sea. We are cast down on the platform with our handbags. We are whirled asunder. My sense of self almost perishes; my contempt. I become drawn in, tossed down, thrown sky-high. I step on to the platform, grasping tightly all that I possess–one bag.

“Trains are relentless things, aren’t they, Monsieur Poirot? People are murdered and die, but they go on just the same. I am talking nonsense, but you know what I mean.”

“Yes, yes, I know. Life is like a train, Mademoiselle. It goes on. And it is a good thing that that is so.”

“Because the train gets to its journey’s end at last, and there is a proverb about that in your language, Mademoiselle.”

“‘Journey’s end in lovers meeting.'” Lenox laughed. “That is not going to be true for me.”

“Yes–yes, it is true. You are young, younger than you yourself know. Trust the train, Mademoiselle, for it is le bon Dieu who drives it.”

The whistle of the engine came again.

From ‘The Mystery of the Blue Train’ by Agatha Christie

Outside the window, there slides past that unimaginable and deserted vastness where night is coming on, the sun declining in ghastly blood-streaked splendour like a public execution across, it would seem, half a continent, where live only bears and shooting stars and the wolves who lap congealing ice from water that holds within it the entire sky. All white with snow as if under dustsheets, as if laid away eternally as soon as brought back from the shop, never to be used or touched. Horrors! And, as on a cyclorama, this unnatural spectacle rolls past at twenty-odd miles an hour in a tidy frame of lace curtains only a little the worse for soot and drapes of a heavy velvet of dark, dusty blue

From ‘Nights at the Circus’ by Angela Carter

Poster produced for the Great Western Railway (GWR) and the Southern Railway (SR) to promote rail travel to Cornwall.

My heart is warm with the friends I make,
And better friends I’ll not be knowing,
Yet there isn’t a train I wouldn’t take,
No matter where it’s going.”

16 thoughts on “A Collection: The Romance of the Railway”