I have loved many of Margery Sharp’s books for many different reasons ; and the book I have chosen for Margery Sharp Day this year is the book I love for its wonderful mix of satire and silliness.

Professor Pounce, a scholar of literary antiquities held in the highest regard, has always dreamed of publishing a monograph that will dazzle his contemporaries. He thinks that he may have finally found his subject when he learns of the local legend of the ancient village of Gillenham. It is said that there was stepping stone in stream there that would ensure that virgin girls and faithful wives would never slip, while the unchaste would invariably trip into the water.

He formed a wonderfully scientific plan. He would have all of  the ladies of the village fill out a questionnaire to ascertain their understanding of the local legend and state of their chastity. And then there would be an event by the stream, with all of the ladies in turn stepping on the alleged Stone of Chastity, so that he could properly establish what its powers might or might not be. 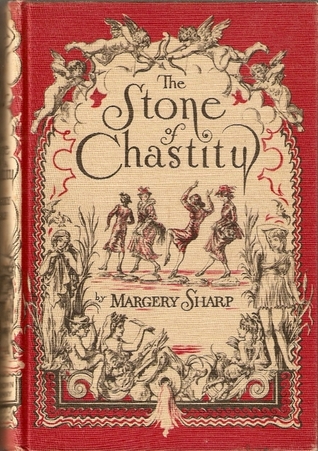 Then refreshments wouldl be served.

It doesn’t occur to Professor Pounce that anyone might be reluctant to take part, or that they might be offended by his proposal; because he really was that caught up in his academic bubble.

Life in the sleepy village of Gillenham will never be the same again. The vicar’s wife is outrages by the revival of paganism, and the vicar is inclined to agree. The Pye family at the farm cut off supplies to the manor house that the Professor had rented for the summer.  The ladies of the Women’s’ Institute marched out to confront the perpetrator of this outrage ….

The Professor ploughed on, sweetly oblivious.

He had brought his nephew, Nicholas, along to act as his secretary; and he had to deal with all of the practical issues while being horribly aware of what the villagers were likely to think of his uncle’s plan. He had to organise the questionnaires, recover the Stone itself from Mrs Thirkettle’s scullery floor, and publicise the grand testing of said Stone.

He also had to juggle three romantic interests: a statuesque beauty, a bookish blue-stocking, and a bright young thing.

That was fun, but as Nicholas was a rather unremarkable young man I’d rather have had a little less time with his love life and a little more time with the villagers and the main plot.

That’s my main reason for saying that this isn’t Margery Sharp’s best work.

But it is wonderfully entertaining.

Margery Sharp drew humour from her story beautifully, and she judged her material perfectly. She was as acute and as witty as she always was, but she was never judgemental or prurient.

I found it easy to believe in these people, the things they said and the things they did, and that the Stone of Chastity might be sitting somewhere in the very real village of Gillenham; even though I knew that it was the product of the author’s wonderful imagination and that her plot was exceedingly improbable!

I happily turned the pages, with some idea of where things were going but not much idea at all how they would all end up.

I was charmed by a wonderful cast of characters.

Carmen, an artists’ model, was a wonderful comic creation, a typical Sharp heroine who always followed her heart and her instincts. She caused quite a stir in the village.

Mrs Crowner, the vicar’s wife made me think of Trollope’s Mrs Proudie. She wasn’t quite as formidable, but the vicar clearly knew that it was best to nod and agree with her.

Mrs Pounce, the Professor’s widowed sister-in law, was a very nice lady, who always acted properly and wanted to enjoy her summer in the country.

I could pick out others, but maybe its time I just said that Margery Sharp created a wonderful ensemble.

I should also say that there were so many wonderful incidents, that the set pieces were so well done, and that the plotting really was quite clever.

The ending felt a little downbeat at first; but there was a nice, gentle twist that I loved, there was a really pleasing realisation for a particular character and it seemed that something had changed in village.

The more I thought about it, the more I liked it.

And I think I might say that about this book as a whole. 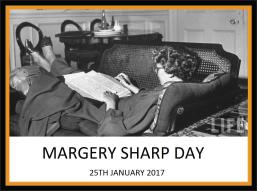 Now, please do tell me if you’ve read a book for Margery Sharp Day. I’ll post a round up once the day is done.

And please don’t worry if you haven’t – Margery Sharp posts are welcome on any day of the year!