I thought that it might be too late to write about a winter book. 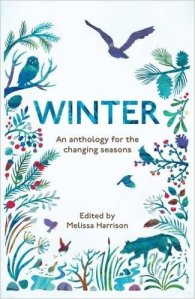 The evenings have been growing just a little lighter. Not quite light enough for evening dog walks in the park yet, but they’re definitely lighter than they were.

The first daffodils have been appearing. I love them, and when I took some to my mother last weekend she was absolutely delighted.

And seagulls have been inspecting roofs; reminding me that it’s nearly time to start thinning out Briar’s coat and put the hair out in the garden, so that birds looking for nesting material can pick it up.

But this week winter came back, with cold, with high winds and with sea spray coming right across the garden at high tide.

What could I do but pick up the fourth of these lovely anthologies from my bedside table?

I’ve had a lovely time reading and writing about the first three seasons:

And now it seems that the winter anthology doesn’t have to wait for the seasons to turn full circle again after all.

This fourth season has never been my favourite. I dislike the dark mornings and evenings; and the cold, damp, grey, windy weather that envelopes us here in the far south-west of England. I know though that it is necessary; that nature needs to rest and be healed in the winter, as we are when we sleep; and that there is still much to appreciate, when there is time and the weather is right, when we wrap up and go out into the world.

The pattern that this anthology follows is wonderfully familiar to me now. It holds a wealth of short pieces. There is fact and fiction. There is old and new. There are nature writers and writers who just happen to write about nature. They all sit happily together, because they all saw the same natural world around them and captured different aspects of it when they say down to write.

There are variations though, beyond the changing of the seasons. Winter brings more poetry, a little more classic writing, and rather more bird watching than I remember in the three seasons that have passed.

I was also aware that there was a progression from the beginning to the end of winter as I moved through the book. That may well have been there in the earlier volumes, but this was the first time I appreciated it. The richness of these seasonal collections is such that I may notice different things, and different pieces may catch my eye, on a second reading.

The very first piece in this book was a highlight.

“A sharp sugaring frost. The mulberry is at its best in November when it at last undresses itself. It does a sort of striptease before my study window, lightly letting go its leaves in a light breeze that seems to touch only this one tree after the stillness of the frosty night. The leaves float down in twos or threes, or just a single leaf at a time.”

(Those are the words of Roger Deakin.)

Immediately after that I was captivated by a sonnet by a poet I must learn more about; and then by a pitch perfect description of a particular day in a particular place by a write whose name I had noted when I was reading one of the earlier seasonal collections.

I can’t quote everybody, but I can draw your attention to some writers I’ve particularly appreciated who have blogs:

I was so caught up with the nature writing that when I began reading a piece that should have felt very familiar I didn’t place it for a while, and when I did I realised what a difference it can make to your understanding of an author when you focus on just a small part of a very large whole.

‘Smoke lowering down from chimney-pots, making a soft black drizzle, with flakes of soot in it as big as full-grown snowflakes—gone into mourning, one might imagine, for the death of the sun. Dogs, undistinguishable in mire. Horses, scarcely better; splashed to their very blinkers. Foot passengers, jostling one another’s umbrellas in a general infection of ill temper, and losing their foot-hold at street-corners, where tens of thousands of other foot passengers have been slipping and sliding since the day broke (if this day ever broke), adding new deposits to the crust upon crust of mud, sticking at those points tenaciously to the pavement, and accumulating at compound interest.’

I am pleased that authors are credited only at the end of each piece, and that I could read without prejudice.

I must mention one more piece of nature writing.  I was so taken by an excerpt from Lucy Jones’ book ‘Foxes Unearthed’ that I really need to find a copy.

‘We stared at each other, the fox and I, for a charged moment. Her eyes were a pale bronze and seemed bright and aware. She turned away and trotted down the street towards my house. She wasn’t in a rush at all. We walked for a while, her in front, me a few paces behind. In those seconds I got the sense that we were one and the same, mammals, predators, denizens of the earth …’

A contemporary piece by Jacqueline Bain really struck a chord.

Another piece, written centuries earlier but very close to home, made me smile.

‘It was about the beginning of the spring 1757 when I arrived in England, and I was near twelve years of age at that time. I was very much struck with the buildings and the pavement of the streets in Falmouth; and, indeed, any object I saw filled me with new surprise. One morning, when I got upon deck, I saw it covered all over with the snow that fell over-night: as I had never seen any thing of the kind before, I thought it was salt; so I immediately ran down to the mate and desired him, as well as I could, to come and see how somebody in the night had thrown salt all over the deck. He, knowing what it was, desired me to bring some of it down to him: accordingly I took up a handful of it, which I found very cold indeed; and when I brought it to him he desired me to taste it. I did so, and I was surprised beyond measure.’

That comes from ‘The Interesting Narrative of the Life of Olaudah Equiano’ – another book I’d like to know more about.

The quality of the older writing selected from this wonderful. How could it none be when you can draw on writers like Thomas Hardy, Claire Leighton, John Clare, Virginia Woolf …

‘The Great Frost was, historians tell us, the most severe that has ever visited these islands. Birds froze in mid-air and fell like stones to the ground. At Norwich a young countrywoman started to cross the road in her usual robust health and was seen by the onlookers to turn visibly to powder and be blown in a puff of dust over the roofs as the icy blast struck her at the street corner. The mortality among sheep and cattle was enormous. Corpses froze and could not be drawn from the sheets. It was no uncommon sight to come upon a whole herd of swine frozen immovable upon the road. The fields were full of shepherds, ploughmen, teams of horses, and little bird-scaring boys all struck stark in the act of the moment, one with his hand to his nose, another with the bottle to his lips, a third with a stone raised to throw at the ravens who sat, as if stuffed, upon the hedge within a yard of him.’

(From ‘Orlando’ by Virginia Woolf; which has been on my ‘must re-read’ list for a while.)

A piece like that doesn’t sit as naturally as it might with those around it, but how could you leave it out?

Now this is something that I’ve said before but must say again:

When I look at the book as a whole I have to say that some of the pieces spoke to me more than others; and that some of them didn’t really speak to me at all. But that it the way of things when you hear so many different voices, and I can’t say that there were any that didn’t deserve to be heard.

It’s a beautifully produced book; it would make a lovely gift to anyone who loves or is curious about the natural world around them.

I know that I will be revisiting all four anthologies as the cycle of the seasons continues.

9 thoughts on “Winter: A Wildlife Trust Anthology for the Changing Seasons”