This is a strange and bewitching book: a memoir of Catherine’s Parisian childhood with her unconventional parents, Marie-Antoinette (Poum) and Alexandre

I could never doubt that I was reading the impressions and memories of a real eight-year old girl, and yet there were times when I might have been reading a fairy tale. A tale that was both flooded with light and overcast by dark clouds.

Stories was so important to Poum and Alexandre; they loved the telling of tales, and they drew from those stories to try to make sense of the world, their relationship and their own seemingly troubled history, for themselves and for their daughter.

Consequently, this book is threaded through with references to Greek mythology, the Odyssey, the Magna Carta, the Napoleonic Wars, Rodin and Claudel, the French Resistance …

It sounds a little eccentric – and there are moments when it makes the book a little too dark and dense – but it feels utterly real and utterly right. 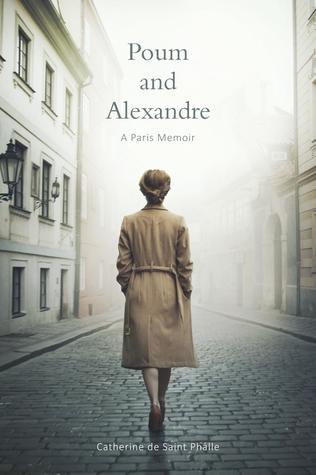 Catherine knows that her parents and her upbringing are unusual; and the words she writes about filled with wonder, with love, and completely without judgement.

She knows though that something is not right.

She senses disapproval from her wider family, and those relations are held at arm’s length by her parents. She is told that it impossible for her to attend the local Catholic school, and instead she is taught by two elderly ladies in their apartment.

She doesn’t like it at all, but she bears it stoically.

Poum, is an graceful, elegant woman, warmly when she visits Guerlain on the Champs-Elysees. But she is fragile, she needs care and support. There are days when she clings to her home, close to Napoleon’s tomb, spending hours in bed reading The Odyssey; and there are other days when she vanishes completely.

Alexandre is much older than Poum, and much more stable. He leaves the apartment five days a week to work in a bank; and he disappears completely at the weekend, for reasons that are never explained to Catherine, though that day will come when she understands.

He knew Poum in England when she as a young child, and they came together when their paths crossed again, unexpectedly, in occupied France.

The structure of this book is both a strength and a weakness. The first half belongs to Poum and the second to Alexandre. I loved both, the contrast helped me to understand both, to understand the different things they gave to their daughter, and to understand why their relationship worked so very well for both of them. It was wonderfully effective seeing the same incidents twice from different perspectives, as well as seeing more aspects of Catherine’s life. The drawback was that the contract sometimes made me feel that I was reading two different books about the same subject, that the book as a whole didn’t quite coalesce. And that when I was with one I missed the other.

As a whole the book does work, because I so believed in Poum and Alexandre, and because so much of the writing was so beautiful, and so suffused with a daughter’s love for her parents.

‘I know I appeared into my mother’s existence ten years into her shared life with my father. She thought she was barren, until she found she had a problem adjusting her skirt. ‘Ouch, ouch, I must have gained some weight.’ A friend advised her to go to a doctor. When she finally did she discovered she was sis months pregnant. ‘You were a shock,’ she tells me.”

‘Guerlain is a temple, a religion. The Guerlain mothership is on the Champs-Elysee. Its painted portals and stuccoed ceilings are ripe with Greek goddesses, and the scents of the place are so subtle that they circle you like invisible dolphins and ferry you away to mermaid land where the feminine reigns’

‘I am stunned when I realise that my father had a childhood too. Like Mount Fuji in Hokusai’s painting, he’s always existed, as he is – smoky in the distance, honey-scented up close – but, when it finally dawns on me that once he was as small as I am, his childhood self comes rushing at me from the other end of the telescope.’

‘The stained-glass wondows, little one, create a luminous slope of light. Whatever the time of day, from dawn to dust, the same dim glow is maintained within the church, whether it be bright sunshine or rain. That’s the stained glass windows’ secret. Right now they are sifting the brilliant afternoon glitter in the same way they will sift the pale light of dawn.’

‘In Paris, a population of cleaning ladies lives in a seamlessly close parallel world to that of the city’s other inhabitants. They have chapped hands and heavy legs. Their bearing is a little stately, like people in the thrall of an effort that encompasses too much of their being.’

‘Poum is not an easy mother, either, but when I least expect it, with a glance, with a whiff of her scent as she passes, she pours gold in my cup. Of course, like fairy gold, it doesn’t happen very often or last very long – in a second it’s gone. But something of it stays with me because, as she quotes, my name is ‘written in the palm of her hands.’

‘We are walking through the cobbled streets with nary a space between each mediaeval house or building. The winding progress, the eagle’s nest at the top, the dizzying sea and strand with their large invisible patches of moving sand are as attractive to pilgrims as to children. This is Poum and Alexandre’s lair. They love it here and have come, I soon recognise by their exclamations, many times in the past.’

‘My father tells me about so many people that I have problems unravelling the living from the dead and the characters in his stories from the real ones he’s met. Our steps are slowing down. The building stand stiffly behind their addresses. I’m sure that if a bomb exploded they wouldn’t budge an inch.’

I loved this memoir for writing like that, for its wonderful mix of reality and charm, and most of all because it was such a fitting and loving tribute to unusual parents.

13 thoughts on “Poum and Alexandre: A Paris Memoir by Catherine de Saint Phalle (2016)”

The Vanishing of Audrey Wilde by Eve Chase (2018)