A book that you really want but that you think you will probably never be able to hold in your hand and read?

I discovered the author ten years or so ago, when one of her books was reissued as a Virago Modern Classics. I loved it, and I went looking for the two sequels. The library had one and I found an inexpensive paperback copy of the other.

I loved those two sequels too.

I couldn’t understand why only one book was in print.

The library had more of the author’s books in reserve stock, so I began to order them in, and it wasn’t very long at all before I had found an author to cherish.

I never could pick a single favourite of anything, but if I did have to pick a favourite author she would be on the shortlist.

The library didn’t have all of her books and, anyway, I wanted copies to keep.

I steadily tracked down most of her books, but I found that some of them were very difficult to come by.

The author was very successful, a few of her books were made into films, and so those were printed in large numbers, most of her subsequent books were too, and some of her earlier work was reissued.

I was lucky enough to find one of them a year or two ago, but that first book remained elusive. Copies did appear online occasionally, but they were so highly priced that I really couldn’t justify the cost.

Some of the authors books were reissued it digital form a while back. It was lovely to see them reappear, but all of the books that the publisher chose were already in my collection.

I continued to look for a copy of the book that I thought would always be just out of reach, but my hopes weren’t high.

Then a copy appeared, in the hands of a reputable American bookseller, at a much more reasonable price. It was far from cheap – cost what I might have spent on several brand new books – but I told myself that a chance like this might never come my way again.

I placed my order and I waited patiently for my book to fly across the Atlantic.

The author is Margery Sharp, and the title of her very first novel was ‘Rhododendron Pie.’ 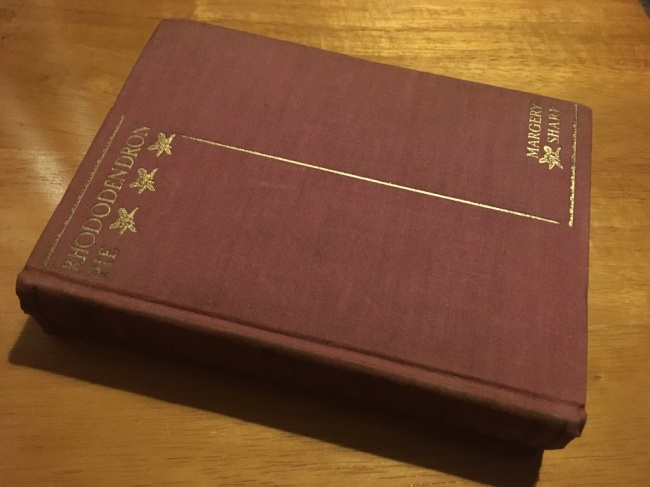 ‘The Laventies’ garden was unusual in Sussex, being planted French-fashion with green-barked limes, eight rows of eight trees at a distance of six feet. The shady grass between them was dappled in due season with crocus, daffodil and wild hyacinth, but they had no successors. All the other flowers were in the lower garden, where Ann’s tenth birthday party was drawing to a rapturous close.

The young Gayfords were even then being led out of the great gate in the west wall, a gate almost as wide as the garden itself and surviving from the days before the stables had gone to make way for rhododendrons. It was of iron, man-wrought, with a beautiful design of fruit and foliage, and Mr Laventie used it as his back door.

With the departure of the guests a change came over the garden: the Laventie family settled back into itself with a breath of content. They had been exquisitely, lavishly hospitable, but when Dick pulled to the gate and leant back against it it was as though he barred our every everything that could mar the beauty of the hour.

I may not read much more than that for a while, because I still can’t quite believe I have the book, because I want to savour the anticipation for a while, and because life isn’t leaving me too much reading time at the moment.

But I think, when things settle down a little, it is definitely time I read another one of Margery Sharp’s books …