It’s a long time since I read George Eliot’s first two Tales of Clerical Life, and I don’t quite know why it has taken me so long to read the third – and final story, but I am so glad that I have read it now. It is the best of the trilogy, and it is a story that reminds me – and must have suggested to contemporaries – that George Eliot would become the finest of writers.

This story is set in the small town of Milby; a town that has been ministered to by a succession of clergyman, who have ranged from the downright wrong for the role to the merely competent. The most recent incumbent was elderly, and so he took on a curate to relieve him of some of his burden.

The new man was evangelical and pragmatic, and he divided opinion. Many loved Mr. Tryan, but there were some who hated him, who considered him to be nothing more than a dissenter. Lines were drawn, and the battle that would be fought would make the conflict of the Grantlyite and Proudieite forces in Barchester look like a tea party. 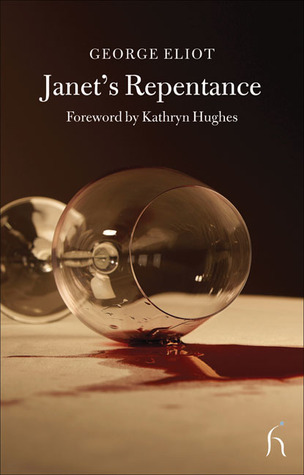 Mr. Dempster, the town solicitor was the new man’s most vociferous critic. He was a respected man, but respected from fear not love. He drank heavily, he brooked no criticism, and he considered his word to be law. His wife, Janet, supported him, she encouraged his persecution of the poor curate.

The world thinks that she is as bad as he is; but the truth is rather different.

Janet suffers at the hands of her violent and abusive husband. She is desperately unhappy, but she stays because it is her duty, because she remembers the early days of her marriage when she had been happy, and because she had nowhere to go.

She is driven to drink; and one night, when she is emboldened and resists doing something her husband expects of her, he turns he out of the house in her nightdress.

A neighbour takes her in and the kindness she is shown makes her realise how wrong she had been about Mr. Tryan and his supporters. She knows her duty – she will do her duty – but she will do penance and she will endeavour to live a better life.

I loved the voice that told this story. It was distinctive, it was warm and wise, and I didn’t doubt that the narrator was personally acquainted with the people, the places, the events, that she was sharing. I was sure that there were many wonderful stories she could tell, but she knew that this one was important, and that it was important that she told it well.

It is a story of its time; but the story of domestic abuse feels strikingly modern, and the psychology is pitch perfect.

The plot is slow to emerge, because the town and its inhabitants and the situation were carefully introduced. I was happy with that, I loved spending time with the narrator; but that together with some lack of subtlety places this story some way behind George Eliot’s best work.

When the plot does emerge it is is profoundly moving; revealing a story of abuse and unhappiness, of salvation and hope. I felt so much for Janet as she was in despair, as she was rescued by the compassion and friendship of her neighbour and the love of her mother, as she acknowledged that she had been wrong and publically gave her support to Mr. Tryan, as she struggled with the demon drink ….

There are complex emotions here, there is a wonderful depth of feeling, and the story plays out wonderfully well.

I loved that it had a clear morality without ever preaching, and that it speaks profoundly about what it means to be alive in the world, and about how we must live with ourselves and with others.

I leave ‘Scenes of Clerical Life’ eager to read and re-read the rest of George Eliot’s work.

And I remember that why it called me; I had been reading Patricia Duncker’s novel, ‘Sophie and the Sibyl’, which was inspired by an episode in George Eliot’s life. I was loving it, and I was so taken with her portrayal of the author that I had to pick up one of her books.

I must find that book again …