Catherine Martin was born on the Isle of Skye, late in the 1840s. Her family were poor crofters and some years later they emigrated to South Australia , alongside many other impoverished Highland families.

There were lessons for the children on the long, long voyage to Australia, and Catherine came to love language and literature.  Her education would continue in Australia; she became a teacher, she became a wife, she developed progressive views; she came to especially love German language and literature, and she began to publish poems and translations.

All of this would inform this book – her first novel – which was published anonymously in 1890.

‘An Australian Girl’ is the story of Stella Courtland. She was beautiful, articulate, and sociable; and she loved the world around her and all the things she could do in that world just as much as she loved her books and intellectual pursuits. She was one of the youngest children of a large family, most of her siblings had scattered, and only the youngest were left at home with their widowed mother. Stella was ready to fly, but she would never flout the conventions of society; she would always love her home, and she was able to travel to visit friends and family in different parts of South Australia.

I had to love Stella. She was a wonderful mixture of new woman and tradition heroine, and she was completely and utterly a woman of a particular time and place. 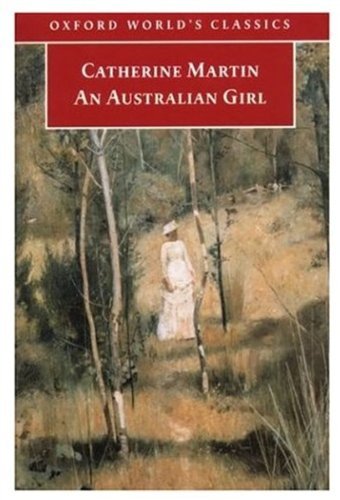 Edward Ritchie had been a childhood friend and he had become Stella’s most devoted suitor. He was a successful and wealthy pastoralist, and though he had no interest in books and learning himself he was happy for Stella to pursue whatever interests she had, to live however she wished, just as long as she would become his bride.

Their friends and their families thought that it would be a wonderful match; but Stella knew that she loved him as a friend and no more than that, and so she did her best to refuse his proposals without losing his friendship.

When Stella was introduced to a visitor from England, Dr Anselm Langdale, she knew that she had done the right thing. They shared the same interests, and they were perfectly matched, both intellectually and romantically.

Friends and family were unsure, but Stella was certain.

The trouble was that one person, Ritchie’s sister Laurette Tareling was unhappy with that match. She had serious financial and marital issues, she would do anything within her power to resolve them and claim the social position that she knew should be hers, and she wanted her brother safely married to Stella.

The story moves between Australia and Europe as it plays out, beginning as a classical Victorian drama, coming close to a sensation novel as it moves forward, and finally settling into a wonderful conclusion when Stella came to realise that she must make her own decisions and determine her own future.

There was an conventional route along which Catherine Martin could have steered her heroine, and I am so pleased that she didn’t, and that the route that she did take was influenced by the values that Stella was raised with as well as her own independent thinking.

Her story says much about the world that she lived in, how it had developed, how it might change in the future, and exactly what in meant to be an Australian woman in the latter years of the 19th century.

The writing is effective in many ways. It describes Stella’s world, especially the natural world that she so loves, wonderfully well. It captures conversations so well that I could hear them in my head. It allows me to understand her life, and to see and feel all of the things that she does.

The book as a whole though felt a little odd. The early chapters were almost entirely conversation, they were followed by a series of letters from Stella to her brother setting out all of the details of what she was doing, and then it settled into traditional storytelling.

I enjoyed the conversations, but I was anxious for the story to open out. I loved the letters, and they were so illuminating that I could forgive the fact that they fell into the kind of narrative that felt more like a book than a letter. I enjoyed what followed, but the prose lacked elegance, and the story didn’t flow as naturally as it might. There is nothing that I can say is wrong, but I can say that Catherine Martin is not as skilled a storyteller as the writers who influenced her.