The last month of the year is here, and so it’s time to play a particular game:

“Take the first line of each month’s first post over the past year and see what it tells you about your blogging year.”

It’s an idea that started with The Indextrious Reader a few years ago, and I remember that that it really is an interesting way to look back at a year. 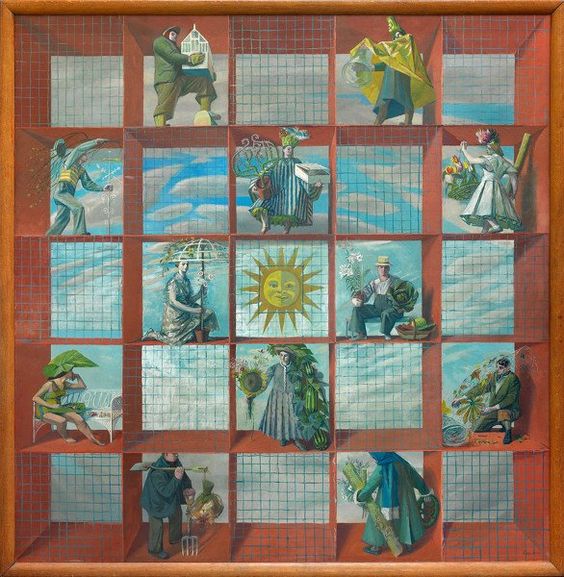 ‘An English Calendar’ by Evelyn Dunbar

A few years ago I was lucky enough to come across what must have been the collection of a devoted admirer of Sylvia Townsend Warner in a secondhand bookshop.

The Fortunes of the Rougons by Émile Zola

I love Zola’s writing, I have meant to read more of his Rougon-Macquart series, but I hadn’t read anything for such a long time because I was wondering just how to set about it.

I remember, many years ago, falling in love with Elizabeth Von Arnim’s writing as I read every one of her books that Virago republished.

The last exhibition at Penlee House – ‘A Casket of Pearls’ – a celebration of its twentieth anniversary – was always going to be a difficult act to follow, but I take my hat off to whoever decided that Stanhope Forbes was the man for the job.

It was Jo’s idea, six years ago now, and it’s become an annual event – mark the end of the first six months of the reading year by putting six books into each of six categories.

Together and Apart by Margaret Kennedy

I love Margaret Kennedy’s writing, but I didn’t rush to pick up this book because I wasn’t that taken with the subject matter.

Just after sunset on Saturday, my mother left this life.

An A to Z for a New Month

A is for ALEXANDRE DUMAS.

Danger Point – or, In The Balance, – by Patricia Wentworth

I realised that it was a long, long time since I had investigated a mystery with Miss Silver.

The Trespasser by Tana French

Ten years ago, a debut crime novel was published.

The Quincunx by Charles Palliser

The Quincunx is an enticing, entrancing recreation of a Victorian novel, written in such perfect period prose and holding so much that is typical of the Victorian novel that you might well believe that Charles Palliser had excavated it and not sat down to write late in the twentieth century.

I can’t say that it’s exactly right, but it is an interesting snapshot.

Do have a go – it’s a lovely way to look back , and I’d love to see your results.

30 thoughts on “A Year in First Lines”