History has it that Olivia Shakespear was the companion of better remembered men, but she was rather more than that. She was a writer, and though she found little success this novella tells me that she had things to say and that, in all probability, she was a very interesting woman. 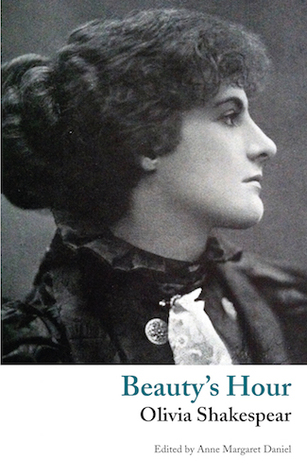 ‘Beauty’s Hour’ was first published in a magazine named ‘The Savoy’; a short lived periodical that was established in the wake of the success of ‘The Yellow Book.’ It didn’t see the light of day again until it was republished by Valancourt Books a year or so ago.

It tells the Mary Gower, a young woman who is intelligent, articulate, and charming; but who knows that she will never marry, that she will have to make her own way in the world. Because she is plain, maybe even ugly. And so she lodges with the lady who had been her governess and she has found employment as the companion to two bright young women who have the good fortune to be both bright and pretty.

They are noticed often, but Mary is noticed never.

She tries to accept that, she tells herself she if lucky to have a comfortable home, a good friend, reliable employment …. but it is hard when she falls in love with the brother of her two young ladies and she knows that he would never even think of her as anyone who might be loved, who might be married.

Her dearest wish is  that she could be beautiful, and one night, as she looks into her mirror it seems that she might.

“I only shook my head; and fell to looking into my own eyes again, with the yearning, stronger than it had ever been before, rising like a passion into my face. Then something unforeseen happened: Miss Whateley, standing behind me, saw it; and I saw it myself as in a dream. My reflected face grew blurred, and then faded out; and from the mist there grew a new face, of wonderful beauty; the face of my desire. It looked at me from the glass, and when I tried to speak, its lips moved too ….

…. My voice was the same; but when I glanced down at my body, I saw that it also had undergone transformation. It struck me, in the midst of my immense surprise, as being curious that I should not be afraid. No explanation of the miracle offered itself to me; none seemed necessary: an effort of will had conquered the power of my material conditions, and I controlled them; my body fitted to my soul at last.”

When she wakes the next morning she finds that her beauty has gone, but then she finds that she can will it back again. She decides that she will venture out into the world as a new woman – as the Mary Hatherley – so that she can learn how different life is for those who are beautiful, and maybe find a way to make people understand that a woman can have other attributes that are as important – more important – than beauty.

Mary Hatherley held the attention of everyone she met, and she was a wonderful success in society. How could she be anything else, with her beauty and with Mary Gower’s wisdom, wit and interest? The man she loved fell in love with her, but try as she would she could not make him understand what really was important, and she realised that he had fallen in love not with her but with her beauty.

“A woman must be good,” he said reflectively. “Only a plain woman,” said I. “Who has been behaving ill now?” “I was generalizing; or, to be frank, I was thinking of Bella Sturgis.” “So am I. You surely don’t expect her to possess all the virtues, and that face?” “To be sure, the face is enough,” answered he; and sat staring full at me, but thinking, as I knew, of Bella Sturgis. “Does she amuse you?” I asked. “Amuse me?” said Gerald. “I’m sure I can’t say. One doesn’t think about being amused when one is with her.” “She just exists, and that’s enough,” I suggested.”

And  worse that that, Mary realised that her success had caused – and would cause – a great deal of harm to others.

“Yet I was more wretched than I had ever been when I was only Mary Gower. I grew to hate the other Mary’s beautiful face; her smile; the gracious turn of her head; her shapely hands. I grew to hate all this with a passionate intensity that frightened me. I seemed to have realized Mary Hatherley in a strange, objective way, as distinct from myself. She was the woman Gerald Harman loved; she was the woman I should have been, and was not; and then came a heart-stricken moment when I knew she was the woman who had done both Gerald and another a wrong that might never be undone.”

She made a momentous decision.

But was that decision hers to make?

Would her transformation have consequences that she had not foreseen?

This is not a ‘lost classic’, Olivia Shakespear was not a great prose stylist, and her characters have no great depth; but this is a wonderfully readable book and I had to keep turning that pages to find out what would happen.

Mary was such an engaging heroine, and I would have loved to have known her. I understood her situation and her feelings, and I appreciated what she was trying to do.

The plot is well constructed, and the story moves along at a good pace. It makes its points well, and though some of them might feel obvious they were points that were definitely worth making clearly. It was fantastical, but there was enough truth in the characters and the situations to make it feel real and to make me believe that it might have happened.

And the suspense, the atmosphere, was perfect.