I very nearly missed my own party!

That’s because I’ve not been up to much reading or writing for a while, and so, rather than rush through a book and struggle to do it justice, I’m going to mark the day by sharing a a lovely part of a favourite book.

The story of someone who does miss her own party, and of what happens next …

‘Not a bit. She is tall and slender, while I am short and dumpy.’

‘I would be, if I wasn’t as light as a bird. She has short, light-brown, curly hair. Very attractive.’

‘So have you. I mean your hair is dark but it curls.’ 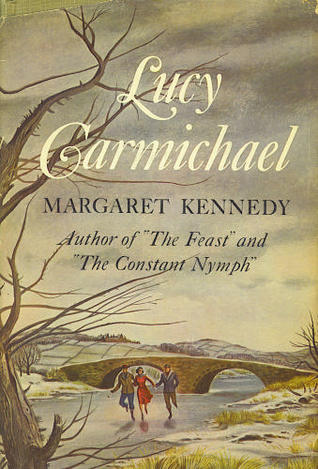 ‘I’m glad you think so. Lucy’s nose is aquiline, not retrousse, and her eyes are grey. She has a very delicate skin, too pale, but that’s easily remedied. I wouldn’t  call her pretty. When she is well and happy she is extremely beautiful. When she is out of sorts or depressed she is all nose, and dashes about like an intelligent greyhound after an electric hare. She has a natural tendency to vehemence which is unbecoming to one so tall, but under my influence she occasionally restrains it. She believes me to be very sophisticated — a perfect woman of the world. She admires my taste beyond anything and does her best to imitate me. She is incautious and intrepid. She will go on to several wrong places, and arrive at the right one, while I am still making up my mind to cross the road. … Until I knew her I had always been convinced that I must be destined for misery. … I don’t expect I’d have had the courage to marry you, to marry anybody, if it hadn’t been for Lucy.’

‘In that case,’ said John, ‘I shall have no difficulty in loving her.’

‘You will oblige me by trying to do so. She’s not everybody’s cup of tea.  My mother is very supercilious about her, simply because her father , who is dead, was only a chartered accountant, and her mother is a woman doctor in Surrey. …

And in some ways she is still rather childish. It is her ambition to be suave and mondaine, which she will never be. When she remembers this she undulates about with a remote smile. When she forgets, which is pretty nearly all the time, she prances along and roars with laughter.’

7 thoughts on “A Little Something for Margaret Kennedy Day”