A long time ago, when I made the transition from junior to senior member of the library, my mother steered me towards a number of authors whose books she loved and that she thought I might love too. I read some of them then, I read some of them later, but it was years before I began to read Elizabeth Goudge, who I knew was a particular favourite.

Her books didn’t appeal to me at all back in the day, and when their author fell out of fashion and her books disappeared from the library shelves I forgot all about her. I can’t remember how or where I found her again, but I’m very pleased that I did.

I’m also pleased that I didn’t read her all those years ago, because I think that the qualities that make her an interesting writer are better appreciated with a little age and experience, with an awareness that life is short and may take unexpected and difficult turns.

I always liked the look of ‘Green Dolphin Country’, but because it was such a very big book I picked up others first. This year though, when I was looking for a book to read on Elizabeth Gouge’s birthday, I decided that its time had come; and I had a lovely few days caught up with the story, the characters, the world, through nearly half a century. 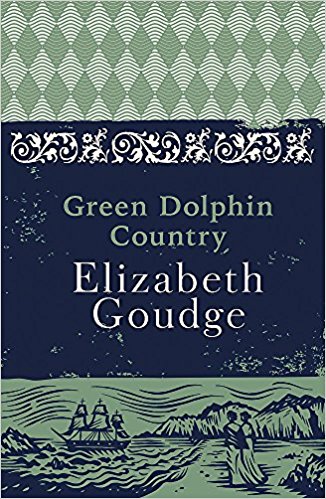 The story opens on one of the Channel Islands – the author has given the fictional name of St. Pierre – in the middle of the 19th century. Two very different sisters were growing up there. Marianne was sixteen, she was dark and lacking in beauty, she had a passionate temper and she was bright and curious about everything the world had to offer. Too bright and too curious for the age and the place where she lived. Eleven year-old Marguerite was fair and pretty, she was vivacious, she loved her life, her home and her family, and she wanted nothing more than happiness for the people she loved and the world around her.

The courses of both their lives begin to change when a newly widowed doctor and his thirteen year-old son, William, come home to the island. Marianne is quick to see something happening, to investigate and to make friends; Marguerite follows a little more cautiously, and makes an equally good but quite different impression.

Marianne plans to win William as her own; but it is clear to everyone except her that he sees her as a friend – maybe the sibling he never had – and that  Marguerite is the girl he loves – and will always love – above all others. She isn’t a fool by any means. Knowing that she wasn’t a beauty and that she couldn’t match the feminine ideal of her time Marianne set about becoming the most chic, the most witty of her social circle and she succeeded; she just couldn’t understand that there were some things that she could never change, that never could be changed.

William joined that Royal Navy, and he tried to secure his future with Marguerite before he sailed away, but circumstances – and a little manipulation from Marianne – resulted in him leaving before he had said many of the things he had intended to say. When he was ashore in the  Far East William was tricked and robbed and couldn’t reach his ship before it sailed. That meant that he was AWOL from the Navy, and that he would be arrested if he travelled back home. He was extremely lucky to meet someone he knew, and to be offered the chance travel to a small colony in New Zealand to build a new life.

Over the course of the next few years William established himself, and then he was able to write home to ask the girl he loved to sail across the world to be his bride. He was tired, he had been drinking, he had a great deal to say, and somehow he wrote the name Marianne when he had written to write Marguerite ….

It sounds improbable, but this twist in the tale was inspired by a real-life story in which exactly the same thing happened!

That is just the beginning of a wonderfully rich tale of love and adventure in times and places where the world was undergoing great change. I had worried that it would be a tale of a great love lost, but of course in Elizabeth Goudge’s hands it was much more than that: it was a story that illustrated that the journey to grace so often begins by accepting that we may not be able to have what we want most and by finding strength to do what we must.

There are lessons about loyalty and friendship, about the depth and complexity of marriage, about the human spirit  in the darkest and happiest of times, and the emotional and spiritual lives of the characters at the centre of the story were illuminated so very well.

Marianne is at the centre of the story, and she a very difficult character to like. Her spirit is wonderful, but she was manipulative, she could see no point of view but her own, and there were some lessons that it seemed she could never quite learn. I couldn’t ever say that I liked her, but I could understand who she was and why she spoke and acted as she did, and I believed in her; as I did in William and Marguerite.

There is a wonderful supporting cast whose stories are woven around the stories of those three, and that did much to make the world in this book live and breathe.

Elizabeth Goudge wrote that she never travelled to New Zealand, and that she researched as much as she could and imagined the rest. I suspect that she  imagined too much, that many of the pictures she has drawn were not true to life, but for the purposes of her story I think that they work.

She wrote so beautifully. I loved the descriptive prose that drew me so close to her characters and allowed me to see the places they saw and the world that they lives in so very clearly. It also served to control the pace, to allow time to absorb the human emotions that are the lifeblood of this book. It is a big book but I find myself wising that it could have been bigger, that I could have stayed longer and seen more. I would have like rather more time with Marguerite, though I do understand why New Zealand was the main focus of the story.

I couldn’t see how there could be a right ending, but there was, and it was so utterly right – emotionally and spiritually – that there was a smile on my face and there were tears in my eyes.