When I finished knitting Franziska I knew that my next knitting project had to be something much simpler and quicker. I had patterns and I had yarn in hand, but new things caught my eye

I liked the mix of simplicity with enough to hold the attention; and I liked that it was a yoked sweater. That was something I had never knitted before.

I particularly liked one knitter’s version, knitted in a yarn that she praised highly and the like of which I had never used before. 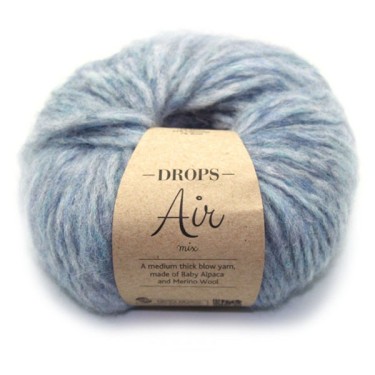 ‘Drops Air Mix is an exciting “blown yarn” made of soft baby alpaca and warm merino wool. The structure of Air Mix is unique because the fibers are blown through a tube with air. This technique makes clothes made from Air Drops particularly light and airy.’

I was curious, the price was very reasonable, and so I placed an order with the ever reliable Wool Warehouse.

The yarn that arrived looked lovely and I was very pleased with the colour I chose. Fog (#10) is a lovely mix of blue and grey.

I started to knit. The pattern was simply but clearly written, and the few modifications I made were to suit me and the kind of sweater I wanted.

The yarn was lovely to work with, though it wasn’t easy to undo, and the stitches weren’t easy to read. That was fine for this pattern but I wouldn’t want to knit anything too complex with it. 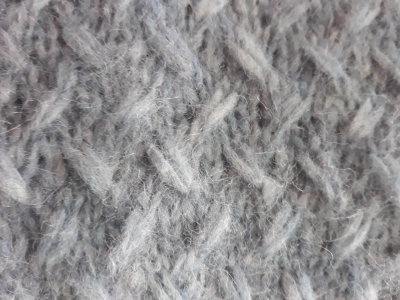 It wasn’t too long until I had a finished sweater. It was warm and light, and quite different from anything else I had made.

There was just one problem.

The neckline was wide, and I liked that but it was a little bit too wide and it slipped off my shoulders. I don’t think its the fault of the design; I think that it was the combination of my narrow shoulders and my yarn choice.

I knew that there was a way of fixing that but I hadn’t ever tried it. I found a tutorial, I looked at it carefully, and then I added slip crochet just below the edge to limit the stretching of the neck band. It wasn’t easy, because the yarn is fuzzy and the pattern there had increases and decreases, but it is as even as I could make it – and it works!

It’s not an ideal solution but it works and it had taught me something. Next time I knit a wide neckline from the top down I’ll think more carefully about how it will sit and whether it will stretch and plan accordingly. 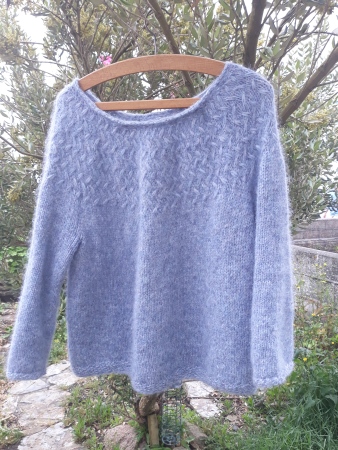 I’m happy that I found a way to make a sweater that I might wear once in a while into a sweater I could wear whenever it was right for the weather.

Next up: I join the masses who have knit Carbeth!

5 thoughts on “A Simpler Sweater”