The first sentences were intriguing but a little worrying:

‘At three o’clock this afternoon Evelyn Wastneys died. I am Evelyn Wastneys, and I died, standing at the door of an old country home in Ireland, with my hands full of ridiculous little silver shoes and horseshoes, and a Paris hat on my head, and a trembling treble voice whispering in my ear:—

“Good-bye, Evelyn darling—darling! Thank you—thank you for all you have been to me! Oh, Evelyn, promise you will not be unhappy!” ‘

The next sentences told me that everything was going to be alright.

‘Then some mysterious hidden muscle, whose existence I had never before suspected, pulled two little strings at the corners of my mouth, and my lips smiled—a marionette smile—and a marionette voice cried jauntily:—

And as I read on I realised that Mrs. de Horne Vaizey was proffering a lovely confection could fill the 1917 shaped gap in my 100 Years of Books rather nicely!

Twenty-six-year-old Evelyn and her younger sister Kathie had been left as orphans, with a selection of elderly aunts their only family. They had the means to set up house together, and so they lived happily for a good many years. Until Kathleen met an eligible young man named Basil; they fell in love, they married, and they set sail for new life together in Canada.

Of course Evelyn’s feelings were mixed. She was happy for her sister, but just a little sad that their bond would never be quite the same again, that she had been left behind. She was uncertain what her own future would hold, but the more she thought the more confident she became that she could lead an interesting life and be valued in the world.

The aunts thought that her only option was to live quietly with them- given that half of the sisters’ inheritance had left with Kathie – but Evelyn knew that wasn’t an option. She explained, over their protests, that she was setting out for a very different future.

She had a wonderful idea, and she knew that all she had to do was set the wheels in motion.

Then she had a letter from a friend that she and her sister had met on holiday. 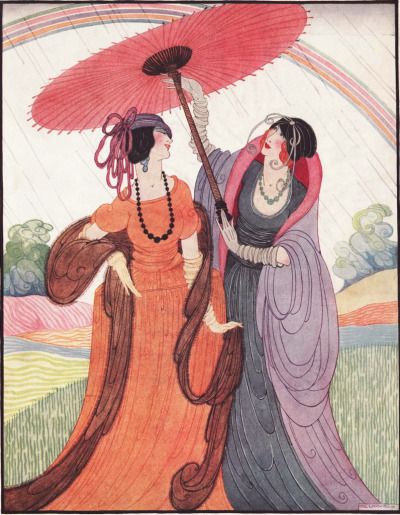 Charmion was a few years older than the sisters, she was wealthy and independent, and she loved to travel and explore. She was sensitive to Evelyn’s situation, and they suggested that they take a country house together, on the understanding that it wouldn’t be a full time residence, and that each lady could come and go as she wished.

Evelyn was delighted with the idea, and she and Charmion found a lovely house and they had a lovely time planning refurbishments, choosing furnishings and creating the home of their dreams.

Charmion was less eager to take part in village society than Evelyn, but Evelyn accepted that because she knew that her friend had a great sadness in her past that was the one thing she wouldn’t talk about.

Evelyn loved village life; but when Charmion set off on her travels she was just as happy with her very different life in the big city, where she put her grand plan into action.

I wish I could say more, but I can’t without giving away far too much.

Evelyn was a wonderful heroine. She was warm and sociable, she was kind and thoughtful, and she became a great friend to so many different people. I loved her plan, and though I had doubts about its viability I understood why it was important for Evelyn and I hoped that it would work.

The plot is very nicely constructed. There are a good number of coincidences and quite a few moments when I had to suspend disbelief, but I always knew that this was a light entertainment and not great literature.

Mrs. George de Horne Vaizey did what she did very well; I thought that she understood her characters and their lives very well, and that she cared about them; and because she cared I had to care about Evelyn and her friends, and about what would happen in their lives.

Because I was so well entertained, because I cared, I found the book’s failings easy to forgive.

I was sorry that I didn’t get to meet Kathie, but pleased to know that she was happily settled in her new life.

Everyone’s story played out just as well – the final resolution  was unlikely but it was exactly what I wanted.