Elspeth Huxley won her place in The Birthday Book of Underappreciated Lady Authors because she is very well remembered for one book but that she wrote a great deal more is often forgotten.

I remember watching a wonderful television adaptation of ‘The Flame Trees of Thika’, her memoir of her childhood in Africa, many years ago. I read and loved the book – which is still in print, thanks to Slightly Foxed – but I didn’t come across anything else she wrote and I didn’t think to look. It wasn’t very long ago that I learnes that she wrote more memoirs, she wrote more books about Africa, and she wrote three mysteries.

I had intended to read a memoir for this birthday celebration, but when I read about the recent death of another underappreciated lady author I remembered that I had picked up some green Penguins that came from her collection in my local second-hand book shop bookshop a while ago, and that one of them was by Elspeth Huxley.

Jessica Mann was a novelist, a journalist, a broadcaster and a great deal more. We were members of the same independent library, we were supporters of the local literary festival, and if I put together a second Birthday Book of Underappreciated Lady Authors there is every chance that her name will be on the list.

Now, back to the book.

Superintendent Vachell is a Canadian policeman who has settled East Africa. He is approached by a well-known hunter named Danny La Mere, who has been leading a safari funded by the wealthy Lady Baradale. Her ladyship has brought thirty thousand pounds’ worth of jewels on the trip, the cream of her collection has been stolen from the portable safe in her tent, and the circumstances suggest that the thief is somebody very close to her.

Posing as an extra guide, Vachell observes members of the party closely. There is Lord Baradale, a keen photographer and inventor; his flighty daughter from an earlier marriage, Cara, who has a fiancé but is involved with the Dutch second hunter; the aforementioned fiancé, Sir Gordon Catchpole, a London-based interior designer; a new maid whose background is shrouded in mystery; a chauffeur-mechanic who had been an actor and had a very high opinion of himself; and an aviatrix named Chris Davis, who is clearly based on Beryl Markham.

It’s an interesting cast of characters, but Vachell finds that he is long on suspects, short on clues, and is his lack of knowledge is hunting is leaving him in serious danger of blowing his cover. 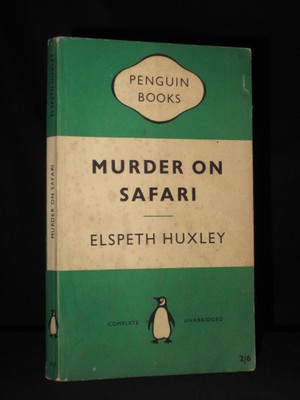 There is a death that might have been passed off as a tragic accident, had there not been a policeman on hand to examine the scene. Vachell must reveal that he is an undercover policeman and begin a murder enquiry. Soon he is investigating two murders, the second even more ingenious, more likely to be taken as an accident that the first.

Elspeth Huxley told her story well, bringing her characters and the setting to life. It feels authentic.

I hate the idea of shooting wildlife for fun and for profit, so I appreciated that the descriptions were not gratuitous; and that the author made her protest by presenting her characters and their safari clear-sightedly, by simply shining a light on them to show how ridiculous it all was.

That does make the book feel dated, as does some of the language and some of the attitudes.

The mystery plot is very well constructed, and it plays fair. There are even ‘clue-finder’ footnotes in my book, guiding readers back to the points in the story where Vachell found his evidence. I hadn’t spotted the clues, but I saw that a good policeman would, and I understood how the case against the culprit had been built.

I did guess the identity of that culprit correctly; because the group of suspects was small and because the plot was well built but it was built on classic lines.

This book stands out not because it is innovative or inventive, but because the author has such depth of understanding of her setting and the distinctive possibilities that it presents for a murderer.

That makes it a distinctive and very readable piece of crime fiction.