I don’t think that I have ever found two consecutive books in a series as different as ‘Framley Parsonage’ and ‘The Small House at Allington’.

‘Framley Parsonage was bursting at the seams with everything that Trollope loved and did well – church and parliament, town and country, romance and finance – and it was a wonderfully vibrant book that built a world that I could have happily gone on living in after the final page was turned.

I explained the structure and the appeal of that book like this:

Consider a Christmas tree. A fir tree in its natural state is lovely, but when it has been adorned with a lovely mixture of old familiar and shiny new ornaments it is something else entirely …

‘The Small House at Allington’ has a great many of the same things things, but they are a much smaller part of the whole and it has a quite different character.

Consider the same fir tree, left in its natural state, but its loveliness enhanced by an artist who has captured the beauty of its natural setting and the life that surrounds it ….

Quite lovely of course, but it took me a while to realise that I was in a different kind of environment and to settle into this book. 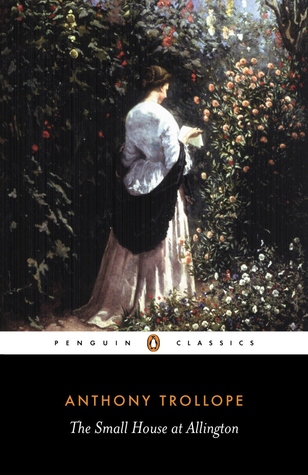 The love affairs of two sisters, of Lily in particular, are at the centre of this story.

Lily will become engaged to Adolphus Crosbie, a close friend of her cousin Bernard Dale, who is their uncle’s heir. Crosbie knows that Lily’s mother is a poor widow but he hopes that her uncle will provide a dowry to help them establish themselves in the world. He discovers that he won’t just before a visit to Courcy Castle; and when he mixes with high society he sees his future with Lily, living on his small salary as bleak.

The Countess de Courcy hasn’t heard of the engagement and she sees  him as Crosbie as a good match for her Alexandrina, her only single daughter still of marriageable age. Crosbie is steered toward making a proposal, and he leaves Courcy Castle with a second fiancée …..

When Lily’s heart is broken there is no weeping and wailing, she does not collapse under the emotional weight of her broken engagement. She carries on playing her part in family life, laughing and teasing, taking joy in others’ happiness, and not allowing a word to be said against the man she says will always be the great love of her life.

Only her mother saw the small signs that showed her daughter’s depth of feeling.

I really don’t know what to make of Lily Dale. On one hand I admired her fortitude, her devotion to her family and friends, and her willingness to plan for a future quite different to the one she had hoped for. But on the other I suspected that she was one of those people who listened to everything you said to her without argument and then did something that showed she hadn’t taken any notice at all. I think that I like her, but I don’t think I came to know her well enough to say that I love her.

I didn’t expect to feel as much sympathy for Aldolphus Crosbie as I did. He was young and ambitious, he was foolish and weak; but he was not a villain and he wished no harm to anyone.  He was punished for his foolish marriage to Lady Alexandrina – and into the de Courcy family; and he had seen enough of what love and marriage with Lily could have been to know what a terrible mistake he had made.

There are other stories in the background, and they made me think of this as Trollope’s ‘marriage’ novel as many different aspects of marriage were considered.

I was well entertained by Lily’s other suitor, young Johnny Eames; and by the residents of his London boarding house and his unintended entanglement with his landlady’s daughter. I was delighted to meet the young Plantaganet Palliser, appalled that he was besotted with Lady Dumbello, but pleased to understand him and the Duke of Omnium and the foundations of the Palliser novels a little better. I was happy that Mr Harding and the Grantleys made appearances, but I was sorry that they were brief. That made me realise that I like the Palliser books a little more that the Barchester books, because they gave me more time with the characters I love most.

I have yet to read a book by Trollope that I haven’t enjoyed, because I feel so at home with that author’s voice, because his prose is always smooth and readable; and because his characters all live and breathe. I loved spending time with the family at the Small House in Allington, and I came to share their concerns and to care a great deal about what would happen to them.

I found some of the loveliest and some of the most heart-breaking moments I have found in Trollope’s work, but I also found some of his most dull scenes. That was in some part because the de Courcy family – who I don’t think have any redeeming features – were given a great many pages; and I did wonder if the arrival of Plantagenet Palliser was a sign that the author was thinking of his other great series, or of how he would finish this series in ‘The Last Chronicle of Barset’.

I can understand that. I’m eager to move on to The Last Chronicle and I wish there were enough reading hours in the day for me to revisit the Pallisers ….