This is not the book I planned to read for Elizabeth Von Armin Day, but for some reason I picked it up, I began to read and I had to keep going. The story makes some very serious points, but because Elizabeth Armin writes with such warm and wit, because she writes from experience, it is wonderfully readable.

Ingeborg Bullivant was the daughter of a bishop and, because her mother was an invalid and her sister was a great beauty who was expected to marry well, it was expected that she would be the dutiful daughter who would look after the house and run around after her father. She had escaped for a fortnight, because she needed to visit a dentist in London and had been granted a that time in the big city to receive treatment and to recover. One visit to the dentist was all that it took. He whipped the tooth out, the pain disappeared, and Ingeborg had a quite unexpected week of freedom. She couldn’t have been happier.

After weeks of miserable indifference she was quivering with responsiveness again, feeling the relish of life, the tang of it, the jollity of all this bustle and hurrying past of busy people. And the beauty of it, the beauty of it, she thought, fighting a tendency to loiter in the middle of the traffic to have a good look—the beauty of the sky across the roofs of the houses, the delicacy of the mistiness that hung down there over the curve of the street, the loveliness of the lights beginning to shine in the shop windows. Surely the colour of London was an exquisite thing. It was like a pearl that late afternoon, something very gentle and pale, with faint blue shadows. And as for its smell, she doubted, indeed, whether heaven itself could smell better, certainly not so interesting.

A colourful travel poster caught her eye, and she realised that she had time to take the trip to Lucerne that it was advertising, that the money she had been given to cover her expenses would more than cover the cost and that she wasn’t expected at home. She booked her place and off she went!

She felt like a bulb must feel, she thought, at the supreme moment when it has nosed its little spear successfully up through the mould it has endured all the winter and gets it suddenly out into the light and splendour of the world. The freedom of it! The joy of getting clear!

Ingeborg fell into the company of Robert Dremmel, an earnest young Lutheran pastor from East Prussia, who had a passionate interest in agriculture. They were the only two single people, it was natural that they would come friends, and before the trip was over there was a proposal.

‘…I do not ask you,’ he went on, ‘to love me, or whether you do love me.  It would be presumption on my part, and not, if you did, very modest on yours.  That is the difference between a man and a woman.  He loves before marriage, and she does not love till after.’

Ingeborg wasn’t at all sure that she wanted to marry Robert, but she liked him and she didn’t want to go back to her old life and explain everything. And so she did marry him, she set off happily for a new life in Germany, leaving behind a family who were horrified at what she had done, at her abandoning her duty to them to marry a foreigner!

At first Ingeborg is happy with her new life in the German countryside. She loves being mistress of her own household, she is happy to spend hours in her garden, and she can read as many books as she life. But she comes to realise that  that Robert is more interested in his soil research than in his pastorate or in her, and that he only expects her to housekeep and too provide a stream of children. Her husband, her mother-in-law, all of her husband’s friends, are only interested in her as somebody who will produce and raise his offspring! 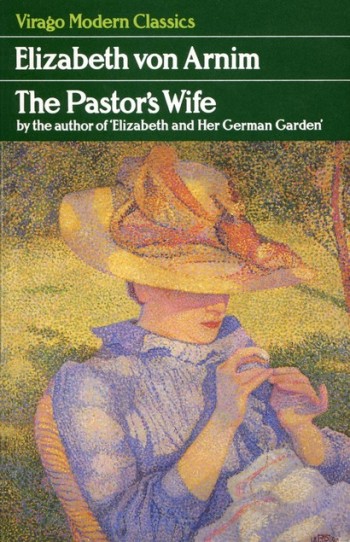 After six pregnancies result in two living children, two infant deaths, and two stillbirths, Ingeborg’s heath begins to fail. Her doctor intervenes, and sends her away to convalesce. When she comes home she realises that she has to make changes, and she explains to her husband that she cannot run the risk of falling pregnant again. Robert doesn’t understand all, he loses interest in her, and began to treat her more like a sister or a favoured family retainer.

That unsettled her, but Ingeborg realised that she was free again, and she struck up a friendship with a visiting English painter, Edward Ingram. He was charmed by her old-fashioned ways, her love of the arts, and her enthusiasm for the natural world, and tempted her with the prospect of a trip to his studio in Venice. He was delighted when she accepted, but horrified when he realised that she come for her second adventure , and that she hadn’t run away with him.

Ingebourg went home to her husband, but how would he receive her?

I loved Ingeborg; she was a simple soul, but that was hardly surprising after her sheltered upbringing and her swift marriage. She found such joy in living in the world, and all she wanted was to have a place of her own place in that world.

I loved the diverse cast of characters that spun around her, they had such depth, and each one of them had a distinctive voice.

I appreciated that Elizabeth Arnim made her main point well. Ingeborg was cast in different roles by her father, by her husband, and by her would-be-lover in turn. None of them gave much thought to what would make her happy, what life would be like for her, but none of them were villains, none of them were deliberately cruel or unkind. They were simply men who assumed that they would – they should – be at the centre of her world ….

There is a mass of lovely detail and incident, the writing is wonderful, there is light and shade, and there is a great deal to think about. I flew through his very thick book, feeling so many different emotions along the way. Understanding, amusement, annoyance, empathy ….

It all rang true, except maybe for the last few chapters. I couldn’t quite believe that the daughter of a bishop and the wife of a pastor would think nothing of travelling with another man and letting her husband think she was making a trip of a very different kind.

But the ending was quiet and it was stunning.

I’m still thinking about it.