Writer Emily Hahn – known to her friends as Mickey – traveled from the USA to China in 1935 and she didn’t come home until she was repatriated – with her daughter – in 1943.

She hadn’t intended to stay for so long, but she found so many reasons to stay and establish a life there.

She was offered an interesting job, in newspaper journalism; and that led her into a business partnership and a romantic alliance with her – married – Chinese publisher.

She mixed with the rich and powerful, mainly British and other European expatriates.

She found and furnished an apartment in Shanghai’s red light district, and she kept a pet gibbon who she named Mr. Mills and who often accompanied her to social events.

Starting to read this book was a little like stepping into a party not knowing any of the other guests and catching the voice of a warm and witty raconteur with a great deal to talk about. I can’t say that I got the whole story straight, but I picked up lots of details and I was intrigued.

That might have happened because the author was a columnist for the New Yorker and was writing for an audience who already knew the shape of her story; it might be because she was anxious to publish this account but wary of saying too much during the war; and it could be significant that she had a serious opium habit for the first few years she spent in China ….

Mickey was commissioned to write a book about the three famous Soong sisters. Each sister had married a  prominent Chinese men – military leader Chiang Kai-shek, revolutionary Sun Yat-sen, and wealthy finance minister Kung Hsiang-hsi – and each had used that to establish their own position of power and influence.

She traveled inland to the mountainous city of Chungking to interview the first of  trio, and gaining her confidence and trust opened the doors she needed opening to complete her book.

There isn’t a great deal about the sisters in this book but there was enough to pique my curiosity, and to make me very glad that I have a copy of that book.

Then Mickey moved to Hong Kong. She began an affair with the local head of British army intelligence and she gave birth to their baby. That was planned, because she thought that a baby would steady her and he agreed ….

She was still in Hong Kong when the Japanese invaded – on the same day that they attacked Pearl Harbor. That raised this book from interesting to compelling, as she vividly describes of the confusion, the uncertainty, the deprivation and the fear of living under enemy rule.  She struggled to feed and care for  her infant daughter and to make sure her that her lover, who was a hospital-bound prisoner, had the food and medicine that he needed.

The book closes in 1943 when Mickey is repatriated to the US with her daughter; the outcome of the war and the fate of the man she loved still uncertain. 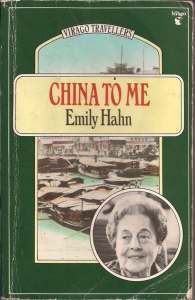 Emily Hahn was a proud feminist and fearless traveler, and the kind of woman who lived life as she felt it ought to be lived without waiting for the rules to be changed.  That made her wonderful company, but it was her skill as a writer and her interest in the people around her that really elevated this memoir. She made clear and insightful observations about the people around her – and herself and how they dealt with cultural differences, the changes that politics and the war brought, and all of life’s ups and downs.

You won’t find a comprehensive account of the history that Emily Hahn lived through in this book, you won’t find much at all about people outside her social circle; and there is so much detail in more than four hundred pages that I can’t say that I took it all in. But I can say that those pages weren’t enough, because brought her own life back to life on the page so vividly and she really made me understand what it was like to be in her position.

I was sorry to part company, but I did understand that the book had reached a natural end.