The Tempest family estate was long-established, it was exceedingly rich, and it had passed from father to son through many generations; but late in the nineteenth century there were complications. Those complications and what they led to are set out in this marvelous story, which has elements of the sensation novel and elements of a ‘new woman novel, mixed with a dash of family saga and romance. 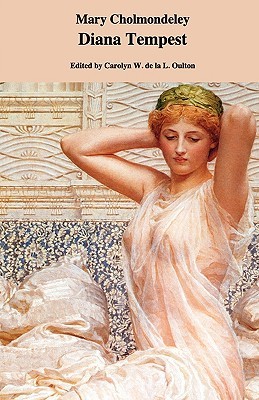 It begins with an estrangement between two brothers, which was quite understandable, given that the younger brother ran away with the elder brother’s fiancee. Their marriage was not a happy one and the lady died young leaving as son, Archie, who would grow up in his father’s care and become a reckless spendthrift just like him; and a beautiful daughter, Diana, who was taken away by her grieving grandmother, who wanted to make sure that she had a happier life than her unfortunate mother. It has to be said that she did a wonderful job, and Diana grew into a beautiful, accomplished and compassionate young woman.

The characters of the two women are drawn so very well; they had such depth, they had such life, and the relationship between them, the loved and the understanding, was conveyed quite beautifully.

Their conversations were a joy to read.

“You would make a good wife, Di, but I sometimes think you will never marry,” said Mrs. Courtenay, sadly. She felt the heat.

“Well, granny, I won’t say I feel sure I shall never marry, because all girls say that, and it generally means nothing. But still that is what I feel without saying it. Do you remember poor old Aunt Belle when she was dying, and how nothing pleased her, and how she said at last: ‘I want—I want—I don’t know what I want’? Well, when I come to think of it, I really don’t know what I want. I know what I don’t want. I don’t want a kind, indulgent husband, and a large income, and good horses, and pretty little frilled children with their mother’s eyes, that one shows to people and is proud of. It is all very nice. I am glad when I see other people happy like that. I should like to see you pleased; but for myself—really—I think I should find them rather in the way. I dare say I might make a good wife, as you say. I believe I could be rather a cheerful companion, and affectionate if it was not exacted of me. But somehow all that does not hit the mark. The men who have cared for me have never seemed to like me for myself, or to understand the something behind the chatter and the fun which is the real part of me—which, if I married one of them, would never be brought into play, and would die of starvation. The only kind of marriage I have ever had a chance of seems to me like a sort of suicide—seems as if it would be one’s best self that would be killed, while the other self, the well-dressed, society-loving, ball-going, easy-going self, would be all that was left of me, and would dance upon my grave.”

Mrs. Courtenay was silent. She never ridiculed any thought, however crude and young, if it were genuine. She was one of the few people who knew whether Di was in fun or in earnest, and she knew she was in earnest now.

Mrs. Courtenay were far from wealthy, but they appreciated that they had enough to meet their needs and for Di to go out in the world if they were sensible and lived simply. Colonel Tempest and Archie were less happy with their lots, and any money that came into their hands would be frittered away. The Colonel was bitterly resentful because he knew that when his brother died, the family fortune and estate pass to his son, John, whom everyone except John himself knows to be illegitimate. He visited his brother as he lay dying but it was to no avail.

John Tempest had a difficult start in life. His mother died when he was an infant, his putative father retired and took no interest in him, and so he was a solitary child whose only friends were servants and teachers, who were kind but always had to be deferential. In consequence he grew up to be a man who was set in his ways and opinions; solitary and yet desperately in need of the good opinion and high regard of others.

The poignancy of the telling of John’s story, the understanding of how his circumstances made him the man he became, and the complexity of his characterisation were quite brilliantly done.

When John meets Di he is smitten; and though Diana, strong and independent, has declared that she will never marry her sentiments start to waver. but as she becomes closer with her cousin.

Their marriage would ensure that future heirs were true Tempests, but there is a problem that is shared with the reader at the very start of the story.

One night, in a drunken stupor, Colonel Tempest agrees to a bet, by which he will pay £10,000 if he should ever succeed to the Tempest estate. By the time he realizes that the effect of this wager was to place a bounty on John’s head, it is too late. He is unable to trace everyone who has an interest in the matter, he lacks the means to pay off those he can trace, and serious attempts are made on John’s life.

One of those attempts leads to John discovering his illegitimacy, and that leads to him taking serious action of his own ….

I was swept through this books because Mary Cholmondeley plotted her story so cleverly and because her telling of that story was so very vivid, making my heart rise and fall so many times as I followed the fortunes of John and Di.

The set pieces were glorious – especially the ice fair – and I loved the way that the big house and the natural world were portrayed.

The supporting cast is not quite so well drawn and the subplots are not as well told as the central story. That did no real harm to the telling of the tale; but I was aware that the author had refined her craft by the time she published her masterpiece – ‘Red Pottage’ – at the turn of the century. There are themes and devices here that readers of that book will recognise. She uses them well here but better in that book; but while there are similarities they are very different stories, and I think that each book stands up and is well worth reading on its own merits.

One of this books greatest strengths is its youthful energy and fervour.

There is passionate advocacy of a woman’s right to set the course of her own life; and a very clear light is shone on the unhappy consequences of marriages contracted for reasons other than real love. There is righteous anger at social injustice, at moral weakness, and most of all at men – and women – who stand in the way of what the author has the wisdom and foresight to advocate.

I had an idea how the story would be resolved I really didn’t know how it would get there until it did.

That story, the characters I met and what the author had to say will stay with me.