Bannisdale was an old family home in the Lake District, a part of the world that the author knew well and brought to life with lovely and evocative prose.

“It was an old and weather-beaten house, of a singular character and dignity; yet not large. It was built of grey stone, covered with a rough-cast, so tempered by age to the colour and surface of the stone, that the many patches where it had dropped away produced hardly any disfiguring effect. The rugged “pele” tower, origin and source of all the rest, was now grouped with the gables and projections, the broad casemented windows, and deep doorways of a Tudor manor-house. But the whole structure seemed still to lean upon and draw towards the tower; and it was the tower which gave accent to a general expression of austerity, depending perhaps on the plain simplicity of all the approaches and immediate neighbourhood of the house. For in front of it were neither flowers nor shrubs—only wide stretches of plain turf and gravel; while behind it, beyond some thin intervening trees, rose a grey limestone fell, into which the house seemed to withdraw itself, as into the rock, “whence it was hewn.”

The story begins on a chilly March day, late in the nineteen century. Alan Helbeck has invited his newly-widowed sister, Augustina, and her stepdaughter, Laura, to live with him at Bannisdale. They had been estranged for many years, because he was a devout Catholic and his sister had abandoned her faith to marry an atheist scholar. She was happy that the estrangement was over, that she was home again, but she found that the house and the estate were much changed. The estate was diminished and  the house was cold and bare, because her brother has sold land and  valuables to support the Catholic orphanages that Jesuit priests had urged him to establish. 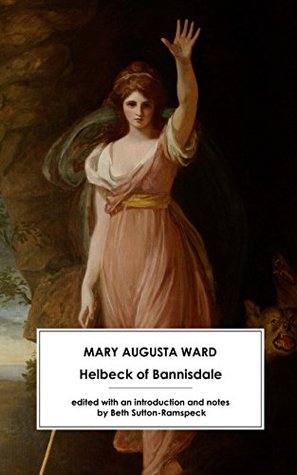 Alan was happy with that, and he would have followed his vocation and become a priest had he not been heir to the family fortune and responsibilities; but Laura was horrified. Like her father, she had no faith, but she saw the value of beauty and history, and she couldn’t understand why he didn’t appreciate those things.

Laura found the asceticism of the household oppressive, but she stayed at Bannisdale because she loved her stepmother and she knew that she needed her. She stayed even when Augustina reverted to Catholicism. The contrast between the two women, one who thinks for herself and one who follows the lead of her male protector, is striking.

At first Laura dislikes Alan and finds him very cold, but in time she comes to appreciate his thoughtfulness towards to her and her stepmother, and to appreciate the beauty of his chapel and the value of the good works he does; though her dislike of his faith and the priests who expect so much from him is unwavering. He is captivated by the spirited young woman, loving her openness and honesty, but worrying about her lack of faith.

Over times their feelings strengthen, and events conspire to make them declare their love.

I loved that this book didn’t lead to a marriage at the very end, that a proposal came a little before the story was half over, and that the rest of the book explored the difficulty of marriage between two people whose beliefs were fundamentally different.

The plot was well constructed and the writing was lovely. It had both academic and emotional intelligence, it evoked the time and the place beautifully, and it always placed the characters, their lives and relationships, at the centre of things.

Laura was a marvellous heroine; she was a ‘new woman’ with wonderful potential, but she was also young and grieving for her beloved father, and terribly torn between the ways he had taught her and the ways of the man she had come to love deeply.

I felt for her as she escaped to visit friends in London, and as she was drawn back to Bannisdale to nurse her dying stepmother ….

It was only at the very end of the story that things went a little awry.  It was dramatic, it was emotional, but I wasn’t as convinced by the final act as I had been by the rest of the story.

I think that maybe that was inevitable, because a story has to have a resolution and the problem that the author set out could never be resolved.

That was my only issue, because I loved what the author had to say and I loved the way that she said it.