I think it is fair to say that this book is not Margery Sharp at the very top of her game, but it does have its own distinctive charms.

It opens in Dortmouth Bay, a seaside resort town with a rather unlikely hero. Mr Partridge is an elderly widower, who has abandoned his duties to stroll along the seafront, hoping to find something interesting happening.

‘The walk along their top was bounded on one side by a row of equally white palings, on the other by a stretch of perfectly-kept lawn adorned with moon- or star-shaped flower-beds. The beds made patterns on the lawn, the flowers made patterns in the beds, geometry and horticulture clasped hands. Upon all these things the sun, as Mr. Partridge sallied forth on the second afternoon in July, shone brightly down. (It had to: Dormouth Bay boasted a higher average of sunshine than any other town on the south coast.) The sea lapped gently in a neat blue crescent. A passing schoolchild stopped to pick up a paper bag and deposit it in a box marked LITTER. Every object in sight conformed unhesitatingly to either natural or municipal orders. Only Mr. Partridge was lawless.

His very presence on those lawns, at that hour, was a scandal. Already three infuriated subscribers had clamoured in vain at the door of his twopenny Library in Cliff Street; already two widows and a maid were facing the prospect of a lonely evening unsolaced by literature. One of them, who had just discovered the works of Miss E. M. Dell, and who had hastened back for more, rattled the knob with such violence that the BACK SHORTLY notice fell to the ground. This would have annoyed Mr. Partridge had he known, for he considered the phrase “Back shortly” to be the commercial equivalent of the social “Not at home” – something to be accepted without question, and with a good grace. In this, as in so much else, he was of course wrong. It was part of his lawlessness.

He did not look lawless. In height he was five foot four, in shape oval. His attire was inconspicuous – pepper-and-salt trousers, black alpaca jacket, panama hat – except about the feet. Mr. Partridge wore brown-and-white shoes, the white brilliantly pure, the brown chocolate-dark, and scarlet socks; and these added a peculiar touch of frivolity to his whole appearance. They were the single outward sign that the scenery of Dormouth Bay had for once fallen down on its job.

Mr. Partridge strolled across the grass and approached one of the star-shaped parterres. From its margin sprouted three notice boards. Two were municipal, bearing the injunctions “Please do not pick,” “Please keep off the beds”; on the third, donated by the Dormouth Bay Rose-Growers Association, it said, “A rose by any other name would smell as sweet. Shakespeare, Romeo and Juliet, Act II, Scene II, l. 43. D. B. R.-G. A.” Mr. Partridge read all three, took out his penknife, and stepped between the bushes to cut a button-hole ….’

I was to grow very fond of this Mr. Partridge, and I miss him and wonder what he might be doing now that the story is over.

His progress led him to an elderly maiden lady, and she introduces him her niece, the lovely Lisbeth Campion, who she has brought to the seaside to keep her safe from the temptations and dangers of London while her new fiancé, a military man, is carrying out a terribly important secret assignment in the Middle East.

He was very taken with Lisbeth, who was beautiful and charming, and who dealt  with any number of hopeful young men who fell at her feet kindly and firmly.

Later that day, Mr. Partridge sees Lisbeth driving off with one of her admirers.

‘Mr. Partridge’s first thought was purely instinctive. Because he acted on it, it was to have far-reaching effect, it was to turn the course of several lives; but it was based neither on reason nor even on common sense.

“Can’t have that,” thought Mr. Partridge.

For all he knew Miss Campion and Mr. Lambert were simply going for a run along the cliff. If he had stopped to consider, some such innocent explanation would at once have presented itself. But he did not stop. The car had almost drawn clear. Its rumble, open to accommodate an up-ended suitcase, was already all of it that Mr. Partridge could see. He had no time to consider, he had time only to jump forward and grip and scramble over the smooth side. He had certainly no time to settle himself. The car, leaping from first to second gear, did all the settling for him.

It wasn’t going along the cliff. It was going to London …’

In London – in Trafalgar Square, to be exact – Mr Partridge discovered that there was much more to Lisbeth than met the eye. She had a loyal heart, a quiet determination, and a wonderful ability to mislead and misdirect people without actually telling lies. 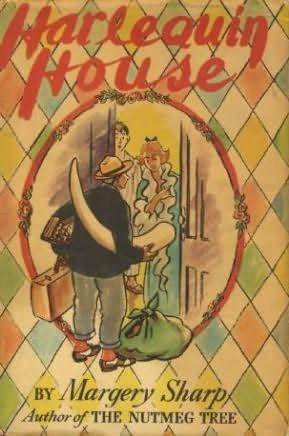 She had come to London to meet her younger brother Ronny, who was as charming and attractive as his sister,  and who she had been told by her aunts to forget. He was just out of prison after getting caught up in a cocaine-trafficking scandal, and his sister had decided to get him back on his feet again so that she could introduce him to her fiancé on his return.

The trio set up house together at Harlequin House.

Mr Partridge finds a job that is much more to his liking than that of small-town librarian, and Lisbeth finds a  job that suits her just as well.

‘Under Victoria the Good, even under Edward the Peacemaker, it would have been unthinkable; for in those days there was still an adequate supply of active single women ready to run about and perform extra tasks for the more fortunate married. (Miss Pickering, taking charge of her sister’s two children, and being dispatched with Lisabeth to Dormouth Bay, was a good example.) But since then times had changed: the ranks of these useful creatures had been thinned: some had entered the professions, some preferred to work for (and be paid by) strangers, some had simply not been born. Wanted Women stepped into the breach. It would supply, on the shortest notice, a competent gentlewoman to supervise spring-cleaning, take children to school, shew country-cousins the town, meet trains, exercise dogs. The shades of a thousand Victorian aunts must have been constantly wringing their hands at this intrusion of hired help into the family circle; but Wanted Women was prosperous and busy.’

The pair work together  to find a useful occupation for Ronny, and to get him on a legal and independent footing, but it isn’t easy because Ronny is indolent and skilled at sliding through life on charm. Even the two of them – even the admirers that Lisbeth continues to attract – are susceptible.

There are many twists and turns before a lovely finale, when Lisbeth’s fiance comes home rather sooner than he was expected.

This book doesn’t have the sparkling wit of many of the authors’ better-known works, and it has less to say and less plot than those books, but it held me from start to finish. I loved and cared about the characters, I was very taken with its mixture of light and dark, and there are lovely Margery-isms scattered through the pages.

This is Margery Sharp in a minor key.

Not the book to pick up if you haven’t read her before, but definitely a book to look out for if you like her style.