Reaching the end of Trollope’s tales of Barsetshire left me very nearly lost for words.

The first book – The Warden – created a world and set it spinning, the books that followed illuminated different places and different lives being lived in that world, and now that I have read this book – a grand finale in the best sense of the words – I can’t quite believe that the world Trollope created isn’t still spinning and that he isn’t going to tell me more stories about it.

It was lovely that so many characters from all of the other books in the series made appearances. There were some that I missed, there were a couple I wouldn’t have missed if they hadn’t been there, but it worked.

There were so many strands, and they had so many different qualities. Some were more effective than others, I enjoyed some more than others, but they worked together and as I read I realised that Trollope knew exactly what he was doing.

The central strand – the story that you’ll read about if you pick up a paperback copy and read the words on the back cover – concerns an alleged theft by Josiah Crawley, the poor, proud and pious perpetual curate of the parish of Hogglestock. When I first enountered Mr Crawley, in Framley Parsonage, I had  read those words, he knew that he would be the central figure in this final book, and I wasn’t at all sure that he was the man for the job, but now that I have read the book I realise that he was. 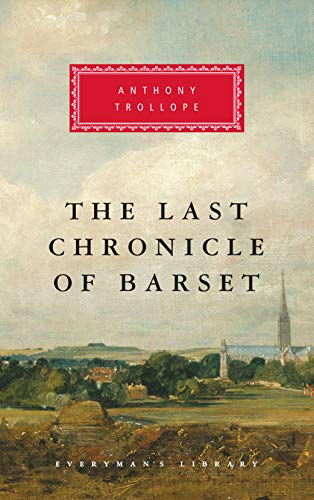 While Mr Crawley is not high on the list of Trollope characters I would love to meet, he is one of his most complex and psychologicaly interesting creations; this man who is difficult and yet loved and supported by his wife are children, who is viewed harshly by the world and yet judges himself more harshly still.

His story in this book was compelling, and Trollope did a wonderful job of drawing others into that story.

Mrs Proudie had not doubt at all that he was guilty and that all of the weight and authority of the church should be deployed against him. When the bishop tried to explain that the church didn’t – and couldn’t – work like that she carried on regardless, but is really did seem that the time when the bishop would stand firm against his wife’s wishes had finally come.

Major Henry Grantly, the son of the archdeacon, was a widower with a young child and he had been courting Grace, the eldest daughter of the Crawley family. His father was appalled that he would not end that relationship when new of the theft broke, and father and son were at loggerheads.

Lily Dale came to the assistance of Grace; and Johnny Eames volunteered to go in search of the dean and his wife, who were travelling abroad and may be able to cast some light on the circumstances of the alleged theft …..

I liked Lily in this book much more than I did in The Small House at Allington, and though the general consensus seems to be that the story her relationship with Johnny didn’t need to be revisited, I was pleased that it was given another twist and a proper resolution.

I was less pleased with the introduction of a new story and a new set of characters in London. The story had its moments but it didn’t sit well against the story that was playing out in Barsetshire and I would have much rather spent more time with old friends there.

My only other – minor – reservation was there were echoes of earlier books in the series in a few of the characters and events of this book.

As always with Trollope, there is much joy in the details

There is also joy in seeing how so many pieces of story fit perfectly into place – there are a great many ‘ah moments’ in this book.

That Henry Grantly was a widower with a child reminded me that his grandfather – Mr Harding – was a very old man. The story of the final act of his life and his departure from this world was beautifully told, losing him really felt like losing a member of the family, and every detail – including a final suggestion he made to his son-in-law – was exactly right.

A great deal happened in this book – I think it would be fair to say that all life is here – and though I finished reading at the end of last year I can still feel the emotions I felt when I was reading.

I meant to read another Trollope this month but I couldn’t, and I think it was because I wasn’t quite ready to let go of this one.