R. C. Sherriff is best remembered for writing the play ‘Journey’s End’, which is a major work about life in the trenches on the Western Front that is is still studied and performed. That is probably as it should be, but his novels deserved better than to be forgotten until they were rescued by the lovely Persephone Books.

This book is a story of ordinary and unremarkable people, the plot could easily be summed up in a sentence or two, and yet it is captivating; because its wonderful insight into character makes the book live and breathe, and allows the reader to believe that the author is speaking honestly and respectfully of people that he knew well.

This story begins on Tom Baldwin’s last day of work for a city insurance company before he retires. He knew how the final hours of his working life would play out, because he had worked in the same place for a great many years, and he played along; but as he waited for his train home he couldn’t help but feel a little disappointed that nobody had thought that he was a long-serving member of staff who had been present at – and helped with – many other departures – and that maybe they might do something just a bit little different.

‘Mr. Baldwin felt unreasonably self-conscious standing on Broad Street platform with the clock under his arm. Although it was done up in brown paper and nobody could possibly guess what it was, he could not help feeling that a placard reading “RETIRED!” hung around his neck.’

A report in his newspaper about a man who had killed himself because he couldn’t cope with being retired was unsettling; bur Tom was quite sure that things would be different for him.

He planned to study history, and to write an accessible and engaging history of England for the reader who didn’t want to study but was interested in knowing a little more. He planned to go out and about with his wife, Edith, because there was still much they had to see, and learn, and discuss. And he planned to spend more time tending his garden, and to attend to all of the jobs around the house that he had been putting off.

It was a lovely plan, but it didn’t quite work in practice. A suburban garden only needed so much time and attention, the jobs around the house that had been put off time and time again over the years were still unappealing, and publishers made it clear that the market for popular history was already completely saturated.

Edith was supportive, and she appreciated the difficult transition that her husband was going through; but she was also rather put out by the changes to her own well-established routines that were forced by Tom’s constant presence.

Together all of the time, the couple found that they had little to tell each other, and nothing much to talk about

This was retirement as a tragedy; as a downward slope towards the end of life.

Was there an alternative?

One day Edith suggests a walk to a favourite spot in the countryside that the couple had enjoyed visiting on weekends before the war. The fresh air reinvigorated them and they chatted happily about things they were seeing and things that they remembered. They were had a lovely time, until they reached their destination and found that the lovely valley views they had been looking forward to had been spoiled by the building of a new housing estate.

‘The desolate charm of it – the wild, fragrant peace – had gone for ever: through the soft gorse field stretched broad hideous gashes of naked yellow clay, and clustering along them, like evil fungus to a fallen tree were hideous new houses – stacks of bricks – pyramids of sewage pipes – piles of white timber – mud stained lorries and sheets of hunched tarpaulin – a nightmare of perverted progress.’

They went down to take a look at the works, and to find out where they could complain about what was happening; but they found themselves being charmed by an extremely capable young salesman. He invited them to take a look around the show home, and curiosity got the better of them.  They were captivated by the clean, modern lines of the house and its modern conveniences, they loved its peaceful rural setting in an area they knew and loved, and each of them began to dream of a different life. 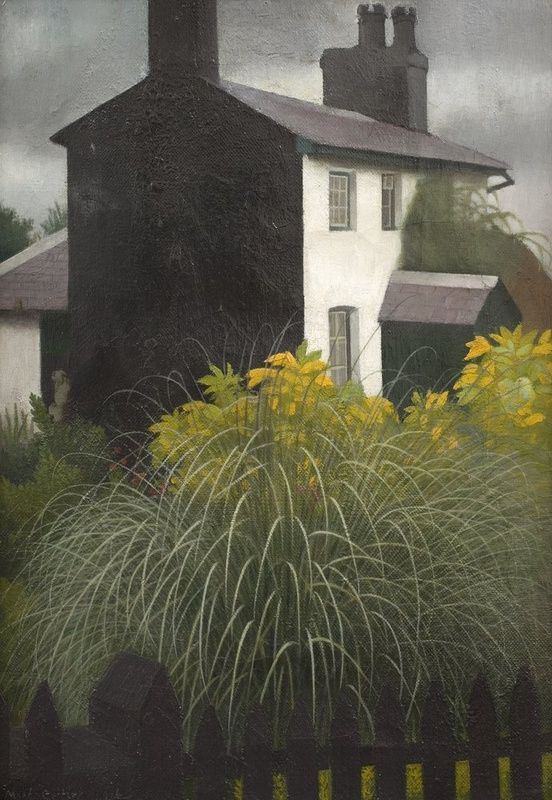 ‘The Black and White Cottage by Mark Gertler

Back at home, they were delighted when they found that they both had the same dream. They began to look at their finances and at practicalities, and they came to think that they might be able to make that dream a reality.

That would be retirement as an exciting new chapter in life.

I found myself completely drawn into the lives of Tom and Edith Baldwin. They were ordinary people and they were so very well drawn that I found myself making comparisons with my grandparents, who I know moved from Devon to Cornwall around the time that this book was published. I saw their strengths and weaknesses, I understood their hopes and fears, and I was anxious to know what life had in store for them.

R. C. Sherriff wrote about them in a way that was beautiful and felt completely natural. I loved his turn of phrase, and I loved the way he caught domestic details and made me understand exactly what life in suburbia was like for the Baldwins, and what a new home and a different life could mean.

This is first and foremost a human drama, exploring the disappointments that can pull a life down and the delights than can pull it back up; but it is also a record of a time when ideas of how people might live were changing, exploring what that change might mean for ordinary men and women.

I was captivated and I only wished that the story could have gone on for longer, that I might have seen more of the minutiae of life in suburbia and life in the country.

The final chapter – a different perspective from some point in the future – didn’t quite work for me, but that was a small disappointment.