I loved the last novel that Elizabeth Gilbert wrote more than enough to rush to read any more that she might send out into the world, and when I read two things she said about this book I was quite sure that it would be very different and very wonderful.

“My goal was to write a book that would go down like a champagne cocktail- light and bright, crisp and fun.”

I’d say that she succeeded in those aims in this story of Vivian Morris, a nineteen year-old college drop-out with a talent for sewing sent to stay with an aunt in New York by her wealthy parents.

The choice of time and place was wonderful – a big city in the summer of 1940,  when Europe was at war but the USA hadn’t become involved, though a great many people thought that it was just a matter of time before it was. There was definitely something in the air that summer.

Vivian’s Aunt Peg was the  proprietor of a theatre company, and a wonderfully unconventional woman. The Lily Playhouse a very small company in a run down neighbourhood that just about made ends meet, by knowing what the local audience wanted and could afford and delivering just that.

I don’t think I’ve known – or read – anything like that, but Elizabeth Gilbert brought that world, and everything and everyone in it, to life and she pulled me right in to the story. 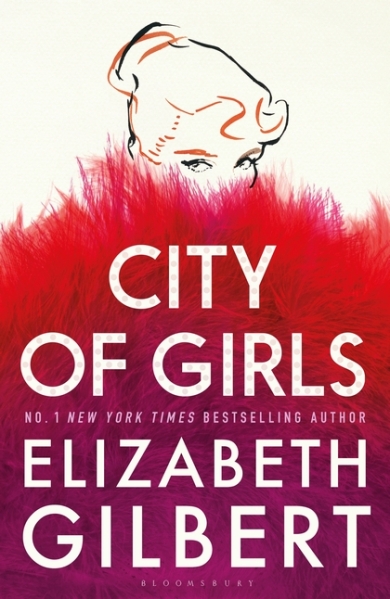 A wonderful set-up like that needed exactly the right heroine, and that’s exactly what Elizabeth Gilbert provided. Had I not done enough in my first year at Vassar to pass into my second year I would have been heartbroken. Vivian was a little abashed, but she was philosophical, and she accepted her parents’ plans for her with good grace.

She arrived in New York armed with a suitcase and a sewing machine; and she quickly found a niche, as her aunt’s company had never had a seamstress before, and she had a good eye for what would and wouldn’t suit people as well as a gift for making the most glamorous outfits out of the humblest materials.

The showgirls of the company were delighted with that and they drew Vivian into their circle. They were out every night after the show, joyfully taking part in everything that their city had to offer after dark.

When the legendary English actress Edna Watson was stranded in New York, old ties of friendship brought her to the Lily Theatre. Peg’s husband, a successful Hollywood screenwriter came home to create exactly the right show for her the company’s most ambitious show ever. Vivian is entranced by the magic of that show, and intoxicated by her romance with the young leading man.

I found just as much magic in the story and the colourful cast of characters as Vivian found in her life; but I saw pitfalls that she didn’t. Her fall from grace was sudden. I saw it coming and I wanted to pull her back from it, but of course I couldn’t. She made one terrible mistake and her life in New York fell to pieces.

Vivian learned some very hard lessons. She hated how badly people thought of her, and in time she learned that while she might be forgiven for youthful mistakes the consequences of her actions would continue to reverberate. She made some more mistakes as she tried to find her way, but eventually realised that she had to accept that she couldn’t change the past and take responsibility for her own future,

At some point in a woman’s life, she just gets tired of being ashamed all the time. After that, she is free to become whoever she truly is.

The second act of her life – and of this book – drew on the best bits of the first to make something that was quite different but just as wonderful. It covered a great many years, they flew by, and I only wish that a little more time could have been spent exploring different things that happened over those years.

I loved Vivian. She was a real, fallible woman, slightly out of step with the age she lived in, but live she certainly did; and as she told her own story her voice rang true. It was clear that she was telling that story to someone in particular, but the identity of that person didn’t become clear until the end of the book. It was a lovely surprise, but it made me think again about the balance of the book, because I didn’t think that Vivian would have gone into quite so much detail about events in the first part of the book and that she would have said more about events later on to that person.

That balance was the only thing that disappointed me about this book.

I loved the story, I loved the cast of characters, and I loved the author’s insight and what she had to say in this book.

If I had been told that this novel was a true story I would not have been surprised, because the characters and the world about them lived and breathed, and there were so many moments and so many things that happened – both likely and unlikely – that felt just like real life.

Vivian’s life was colourful, and it was very well lived.

Her story was distinctive and memorable; and I think that her telling did exactly what it was intended to do.