This story opens on New Year’s Eve early in the war. James Paradine, successful business man and family patriarch, has summoned all of his relations to dine at his country home. They all came, as they always did, but this night did not play out as such nights had in years gone by. When dinner was over, just before that time when the ladies would retire, leaving the gentlemen to their cigars and their port, the host rose to speak. He announced that a crime had been committed, that he knew who was responsible, and that he would wait in his study until midnight, so that the guilty party could come to him and they could put things right.

Most of the assembled company were lost for words and the party soon broke up, with some returning to their own homes nearby and others retiring to different parts of the house.

The next morning, James Paradine’s body was found just below the terrace outside his study where he habitually took the air each night before retiring to bed. 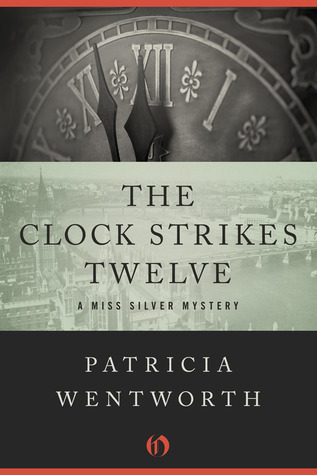 It might have been an accident. The night was dark, the weather was wet, the balastade was low; and so he could so easily have slipped. But of course it wasn’t. The physical evidence clearly showed that James Paradine had been pushed.

One of the things that I have come to appreciate about Patricia Wentworth’s Miss Silver books, is that her police characters are capable professionals and decent people. That was the case here. The police surgeon quickly advised why it was clear that the dead man had been pushed, and the police inspector who was called out quickly realised that something unusual must have happened that evening and averted the plans of certain members of the family to not mention what had been said at dinner.

The police did everything that anyone might expect of them, but it wasn’t quite enough to confirm any one individual as the perpetrator of the crime that James Paradine spoke about, or as his murderer.

Miss Silver’s involvement came about because she happened to be staying with friends in the area and a young member of the family who was a good friend of someone Miss Silver had assisted in the past and recognised her.

(This isn’t the first time that Miss Silver has gained a new case by word of mouth, and I love the idea that when ladies met socially they talked about the governess-turned- private-detective who had quietly and competently come to the aid of certain ladies they knew or knew about. I believed it too!)

That young lady’s cousin – the young man who would inherit the house, the business, and the position of head of the family – was reluctant to allow a private detective into the family family circle; but he came around when it was put to him that, if the mystery wasn’t seen to be solved, suspicion would blight the lives of everyone who had been in the house on New Year’s Eve.

The mystery story was very well plotted, I came to suspect different characters as the story progressed, and there were many interesting twists and turns before the truth was revealed, and though I noticed that Miss Silver had a number of particular concerns I couldn’t work out how they would fit together and could only sit back and applaud her.

The family story was also strong, and I particularly appreciated the drawing of the character of the two oldest characters. One was a widower who felt the absence of his wife keenly, who could be firm but was always fair, and who would always shoulder his responsibilities. The other was his sister, a woman who felt that life had treated her harshly and who clung to the position in the household that she felt was her due and to the person she loved the most.

There was also much to hold the attention in the stories of the younger characters, including the romance that is present in every Miss Silver story. This one was distinctive in the series, though it reminded me a little of a romance in another Golden Age mystery I read a while ago; in its set-up though not in its resolution. That romance wasn’t as central to the story as it had been in previous books, because this book focused on the house in the country and not a young heroine, but it is significant to the playing out of the mystery story.

I’ve come to realise that while there are common threads running though the Miss Silver stories there is also much that changes and evolves. In this book I noticed a significant change of tone from the last book, and I suspect that was because the reality of the war had become clearer to the author. That is reflected in the story too, very effectively.

It also makes me glad I set out to read them in order, and very interested to find out more about Miss Silver’s next investigation.

6 thoughts on “The Clock Strikes Twelve by Patricia Wentworth (1944)”