Many stories set in Irish country houses have been told over the years, but few have the magic that is found in Molly Keane’s novels, when she wrote about a past that she remembered, with both love and clear-sightedness.

She began this story with a tumble of sentences, that fell somewhere between poetry and prose.

…. People drove about in dog-carts and pony traps.
Invitations were issued to tea.
Tea parties mattered too.
Women who powdered their faces were fast
Women who painted them – bad.
Hunting, low wages, feather boas, nipped in habit coats, curly bowlers, bunches of violets, black furs and purple hats were much in vogue.
A book called Three Weeks was both enjoyed and abused ….

Then eight year-old Easter Chevington wakes up early,and explores the delights of the nursery, until she hears her nanny stirring and creeps back into bed so the day can really begin. She is in her father’s country house, Puppetstown, where she lives with her father; her Great-Aunt Dicksie, who has lived there all her life and spends her days happily in her garden; her two boy cousins Evelyn and Basil, who are just a little older than her; and their beautiful widowed mother Aunt Brenda, who thinks that she will marry again one day but for the present is happy to be indolent in such a lovely setting.

The lives of the three children were filled with joys. They ran and played in the grounds; chasing the peacocks in Aunt Dicksie’s garden, distracting Patsy, the young boot boy, and running rings around O’Regan, the gardener. They ran rather wilder in the surrounding countryside; and they had so many  adventures and days to remember, out with their dogs and their horses.

Molly’s Keane’s writing was so rich and evocative that I could have been right there with them; and it seemed that though the seasons may change life at Puppetstown would always be the same.

Through a tangle of elder and laurel and twisting rhododendron they penetrated with the effortless accuracy of complete custom, to find themselves in the dim dark aisle of the Nut Walk. Here silence burned like a still flame behind green glass. The children’s sandalled feet padded without noise up the loamy path. The day was kept without. The golden July day was defeated. And beyond this darkness Aunt Dicksie’s own strip of garden lay like a bright sword of colour beneath the sun.

In the autumn the Nut Walk was the jolliest place of all. Filberts lay on the ground, splitting their creamy green jackets; round hazel nuts, polished like so many brown boots, were there to pick up. And walnuts, all ready to be crushed with enticing messiness from their coating of black slime, awaited the adventurer. But today the Nut Walk was drawn into itself, in a green and secret spell of quietness. Without words, the children hurried down the length of it an dropped themselves from a four-foot wall into the cheerfully brazen field below.

The Great War barely touched the family at Puppetstown. Easter’s father was killed, but he had always been a military man, he had often been away, and it had always been expected that one day he would not be coming back He was mourned and then life settled back into its usual pattern. 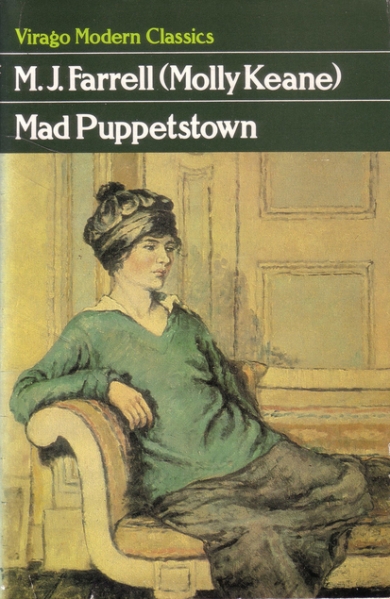 Aunt Brenda enjoyed the company of a British army Captain from the local garrison; but his visits were noticed by Irishmen fighting in another war, and so Aunt Brenda would witness the assassination of her Captain. Shocked the core, she rushed her sons and her niece to safety in England.

Great-Aunt Dicksie refused to go with them, insisting that she would not surrender her family home. She bolted the doors, she turned the ponies loose and she learned to live with just her memories and Patsy for company. Her garden became the focus of her life,  she spent the little money she had on seeds and bulbs;  leaving the house to go to rack and ruin, and dressing herself from the old clothes left in different wardrobes.

The  cousins learned to move in English society, a world quite unlike the one they had left behind. Evelyn was happy there, he fell in love with an  society beauty; but Basil still felt the pull of Ireland, and Puppetstown. He knew that Easter had inherited the house when she turned twenty-one, and he thought – he hoped – that she felt the same way.

“England,” Basil said; “she’s too crowded. We want a littler, wilder place. We’re half-English, both of us, Easter, but we haven’t got the settled, stable drop of blood that goes down with the English. Easter, the thing is we don’t see quite the same jokes. Isn’t this a mad way to talk? My dear, don’t think me an ass, but you do laugh in the wrong places for them. You’ll never be a success here – why you’re even conscious of their ghosts. Easter, dear, let’s run away from them all.”

“Where?” said Easter. The flame in Basil smote her eyes too, there was a sudden spear of light thrust through all her unacknowledged dark. “I know,” she said. “Basil listen, we’ll go back to Puppetstown. It’s everything that England’s not. And Aunt Dicksie’s there. And I’ve all my money. No one can stop us.” She hovered, disappointed here, “All the same – they’ll try. They’ll talk. We’ll have to slip off, Basil. Never tell a soul.”

They do just that, with no comprehension of how much they have changed since they left Ireland, and without thinking that Aunt Dicksie and Puppetstown could have have changed in their absence. Can they restore the house to its former glory, and have they grown up enough to all settle down happily together?

Molly Keane told a wonderful tale in this book.

I loved the arc of the story, and I loved the different arcs of the lives of the different characters. The country house and the people who lived and worked there came wonderfully to life; and their stories spoke profoundly, about family, about home, and about Irish history.

The ending was perfect.

I’d love to know what happened next; but I’m happy to be left to wonder, and to think about those halcyon childhood days at Puppetstown.