I read this book slowly for the very best of reasons – I was so taken with two very different characters, with the relationship that grew between them and with the story that played out, that I just had to stop at the end of each chapter to think about what I had read, about what it might mean, and to smile.

The story opens in London, late in World War II. 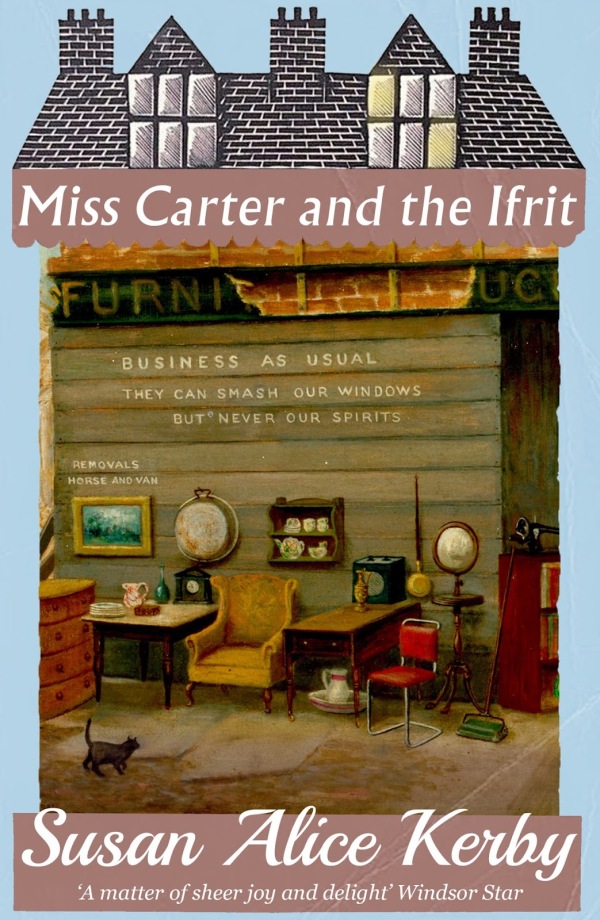 Miss Georgina Carter is an intelligent single woman, closer to fifty than forty, who works in the censor’s office. She is looking forward to a pleasant evening in her own home, as has something that in wartime is a rare treat – a fresh egg that was a gift from her friend and colleague Miss Margaret Mackenzie. She also has a knitting project close to completion, she has a new biography of Lady Hester Stanhope that she was looking forward to reading, and she has procured some old wooden road blocks that she knew would produce a lovely, warm fire.

Abu Shiháb is an Ifrit; one of a race that once lay somewhere between angels and men, but was doomed after using its powers for evil ends many centuries earlier. This particular Ifrit had been trapped inside a tree for most of that time, until the tree was felled and made into road bricks, after which he was trapped in one of them.

When Miss Carter puts a match to her fire there is an explosion, and she thinks that a bomb has fallen. In fact she has released the Ifrit, who is delighted to be free and explains that he is now her devoted and grateful slave. At first she thinks that he is a housebreaker or an escaped lunatic, but a small demonstration of his powers, his explanations, the evidence of her senses – and maybe the books that she has read over the years – led her to accept this extraordinary situation.

Well, perhaps this was all a dream. Perhaps she was insane. Perhaps even she was dead and wandering in that strange limbo of those half-forgotten things that one had always desired and never achieved. But—and she made up her mind suddenly and firmly—but this present situation she would accept … and enjoy it, as far as possible. That was perhaps not sensible, but sense be hanged, it was at least interesting!

She decides that Abu Shiháb must have a new name, more appropriate to the age and the place, and so, after careful thought as to would suit him best, he becomes Joe Carter. He is delighted with his new name, especially with being granted that use of Miss Carter’s family name, which he considers the greatest of honours.

Joe’s conjuring up of banquets and home comforts, after years of war-time deprivation, is a delight for Georgina  and though she feels she should share her bounty she soon realises that she can’t do that, or deploy Joe’s other talents, to help others or to help the war effort, without being dismissed as a mad spinster who has been on her own for much too long.

All of this might make an Ifrit sound rather like a Genie, but though they have things in common they are actually quite different, and to mistake one for the other is likely to cause offence. An Ifrit has much more substance, and though he has skills he is not all-knowing, but is willing to study and learn. Joe was captivated by many things in the world he was freed into, and his interest, his comments and his questions allowed Georgina to see the world differently.

His enthusiasm was unbounded, but that cause Miss Carter one or two problems and, wonderful though his skills were, they belonged to a different age and in need of some updating. But that enthusiasm, and Joe’s great determination to change Georgina’s life for the better would transform both of their lives ….

The characterisation of the pair was brilliant. They came to life on the page; and I loved watching their relationship develop, I loved their dialogues, I loved following their adventures together.

Susan Alice Kerby had the knack of using the fantastical to enhance and enrich a story set in the real world, rather than writing a fantasy, in the same was that Edith Olivier did in ‘The Love Child’ and Sylvia Townsend Warner did in ‘Lolly Willows’. This story might not be as deep as those, but it has other attributes that make it a joy to read.

This is a wonderful example of the art of the story-teller; and I could see that the teller of this tale had attended to every detail of plot, of character, of setting; that she loves all of that and she could make her readers feel that same love.

When I read these words ….

Georgina was recovered from her cold by the weekend, which with Joe’s assistance she spent in Penzance, where the weather was kind and really did her good.

…. I immediately thought that they probably stayed at the Queens Hotel, that they probably walked on the Promenade, and that maybe my mother – who would have been ten or eleven at the time – saw them when she was walking her dog or heading to the beach with her friends.

I wanted to keep turning the pages, I wanted to linger and think, and I appreciated a resolution that was a proper ending but also made me wonder what might happen next.

I had high hopes for this book, as I share a name with its heroine, as it has been likened to books by many authors I love, and as even without that I loved the sound of it. Books don’t always live up to expectations like that but this one did.