Two narratives, separated by fifty years, tell a story of sisters and secrets, of an unsolved mystery and its consequences, and of how family relationships are changed by events and by the passage of time.

The first story is told by fifteen year-old Margot Wilde, the third of four sisters who live a happy, bohemian life in fifties London. When their widowed mother is presented with the chance of a summer in Morocco she seizes it, and sends her girls to stay with their Aunt Sibyl and Uncle Perry at Applegate Manor in the Cotswolds. It would be their first visit since their cousin Audrey had disappeared five years earlier.

Margot had been particularly close to Audrey, they had always resembled one another; and when she was in her family home, when she saw how deeply her disappearance still troubled her aunt, she couldn’t help being drawn into the life that he cousin had left behind and being troubled by the unsolved mystery. 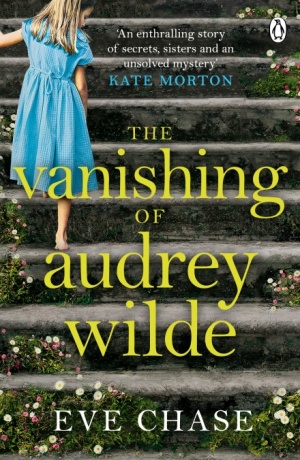 It was unsettling for all four sisters, and because the summer was warm they were able to spend much of their time outside, That was how they came to meet Tom and Harry Gore, whose family spent their summers at the neighbouring Coniston Place. And that was what unsettled the relationship between the four sisters ….

The second story is told by thirty-five year-old Jessie, who has persuaded her husband to but Applegate Manor. It stretched their finances, almost to breaking point, but Jessie was sure that moving out of London and settling in the country was the best thing for her family. It would allow her to give her young daughter the upbringing she wanted,; it would give her a chance to improve her relationship with her stepdaughter, who she didn’t think had been able to come to terms with her mother’s death a few years earlier; and it would allow her to escape from the very long shadow cast by her husband’s first wife.

None of that would be simple, nothing really went to plan, and when she learned the history of her new home Jessie began to question whether she had really done the right thing for her family ….

I was captivated by each story, because both narratives had the ring of truth as they spoke in their different ways of evolving family relationships, of the ways that the past can haunt the present, and the complications the come with growing up.

The echoes and the differences were beautifully handled,  with subtlety and the lightness of touch that made it feel completely natural and right. I particularly liked the contrast between the bright and warm summer days of the past and the cold and wet days of the present.

Of course, all of that would only work if the characters were engaging, and they were. They lived and breathed, and they pulled me right into their stories. I always love stories about sisters and I loved that these sisters were both distinctive and alike, and that the relationships between them were so very well drawn. The characters of step-mother and step-daughter in the present day were just as well done, and I was very impressed by the way that the relationship between the two was drawn and the way that it evolved.

Houses are never just houses. I’m quite sure of this now. We leave particles behind, dust and dreams, fingerprints buried on wallpapers, our tread in the wear of the stairs. And we take bits of the houses with us. In my case, a love of the smell of wax polish on sun-warmed oak, late summer filtering through stained glass. We grow up. We stay the same. We move away, but we live forever where we were most alive.

It was one of those books that made me think that the author and I have read and loved many of the same books.

I picked up her previous book from the library today, and I am looking forward to what comes next.