We have been having some long overdue building and decorating work done, and one of the consequence of that has been that I have had to pack a good number of my books away. While I was going through the difficult process of deciding which books I could part with for a few months, a book by Margaret Kennedy caught my eye, and I realised that I hadn’t read any of her work for a very long time.

That had been deliberate, because I only have two novels left and I hate the idea of running out, but once the idea of reading them had lodged in my head I couldn’t shake it our again; and the idea of visiting a Greek island while the weather raged outside was simply irresistible.

The Forgotten Smile is Margaret Kennedy’s penultimate novel, and it is mainly set on the island of Keritha, Like many of her novels, it tells the separate stories of a number of characters whose paths cross and it moves backwards and forwards in time. 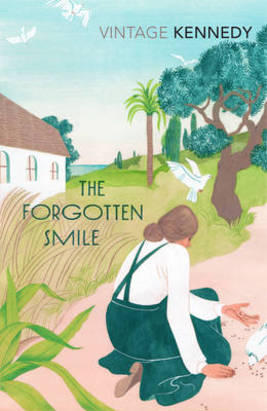 Doctor Challoner is an elderly academic, and he is in Greece and on his way to Keritha to collect an inheritance from his aunt and uncle. His grand-father’s second wife had been Greek, she and her two children had never really felt at home in England, and so when her husband died she took her children home. Freddie and Edith had lived there for all of their lives, happily and rather unconventionally. Though Doctor Challoner had no feelings about them and no interest in their home or their island, he was set on recovering certain family heirlooms.

While he is on his way, he encounters Selwyn Potter, a former student, who was academically brilliant, good-natured, but socially awkward. Doctor Challoner wasn’t overly pleased to see him, he didn’t think to ask what he was doing there or why he had become a school-teacher, but as he could not speak modern Greek he took him along to act as his interpreter.

The sky was dazzling and the sea was a very dark blue shot through with streaks of green and bronze like a peacock’s tail.  The distant islands, scattered about the horizon, were pale lilac and pink in the triumphant light.

When the two men reached their destination, Selwyn was surprised to be greeted by Kate Benson, whose children he had known at school and who he had always considered to be the best of mothers. She remembered him somewhat less fondly, as the clumsy young man who had broken her coffee table, but each would both discover that the other had an unexpected journey to reach that particular point in the world and in their life.

The two histories that unravel are both expected and unexpected.

Kate felt disregarded by her husband and underappreciated by her children. It might be true that she had not handled their transition from children to adults with lives and relationships of their own as well as she might, but even if that as the case they had judged he harshly and thoughtlessly. That was why she decided to do something that she had always wanted to do – she went on a cruise. It as not a great success but it took her to Keritha. She went for a walk while the rest of her fellow travellers sat on the beach, she met some old school-friends – Freddie and Edith Challoner; they invited her to stay – and she did. A visit home showed her that her absence had consequences that she had not foreseen, and that maybe that was no longer her place in the world.

Selwyn had thought that he had found his place in the world. He had never thought that he would but he did, and then he lost almost everything through no fault of his own.

He had been, she perceived, too happy for safety.No refuge was left to him in a world which had completely disintegrated.

These two stories of separation and loss, rediscovery and recovery, are set against a very different story.

Keritha was a tiny island, away from the tourist routes and largely untouched by the modern world. The old ways still prevailed,  it was pagan and it was primitive, and that gave it its own particular magic. Alfred and Edith appreciated that, Kate and Selwyn appreciated that, but Doctor Challoner would have none of it; because though he loved the classics he had no interest in anything at all beyond his chosen sphere. He considered the island backward and the islanders barbarous; he just wanted to collect his inheritance and leave, but on Keritha – and particularly for the heir of the man who had been dubbed ‘Lord Freddie’ the world just didn’t work like that!

In the early stages of the book my overriding thought was that I was reading another very good Margaret Kennedy novel. Her writing was elegant and evocative, she  was clear-sighted, she was psychologically acute, and she made these characters and their worlds – both Keritha and England –  live and breathe.

I was particularly taken with the two leads, Selwyn and Kate. I knew these people, not well because Margaret Kennedy is an author who shows rather than introduces her characters. I understood them and I empathised with them.

There is a little comedy here, among the more serious and complicated emotions, and though it isn’t something I usually associate with her work I have to say that she handled it very well.

As I turned more pages I my thinking shifted, because I was so very impressed by one thing : how cleverly she was gradually revealing different aspects of her characters and their lives. I didn’t think about how she might end this story, but when I reached the end I thought that it was exactly right. It was a final chapter for this book but not a final chapter in the lives that were illuminated in its pages, and I appreciated it was left open with just a little suggestion of what might happen next.

‘The Forgotten Smile’ is both recognisably Margaret Kennedy and distinctive in her body of work; and thought I cannot say that it is her very best work I can say that there are things her that she did as well – and maybe even better – than she had before.

3 thoughts on “The Forgotten Smile by Margaret Kennedy (1961)”