When life has you wanting a book that is diverting and not too demanding, one of Patricia Wentworth’s stand-alone stories might be the very thing.

This one was just that for me.

The story opens in London, when a woman and a man sit on the same bench very late at night.

Flossie had just taken a new job as a parlour maid. She found herself in a house of four women, the other three being the elderly employer she would never see, the nurse who protected her fiercely, and the book who never left the basement. When Flossie had handed over the old lady’s night-time drink and was on her way back downstairs, she looked into the drawing room. Where she had previously seen a large mirror in a gilt frame she saw just the frame, and she was sure that a human face was looking out from the dark space where the mirror once was. She was terrified and she fled, vowing to never set foot in the house again.

Miles was the secretary to a wealthy American, and he had come to London to look for his employer’s young niece. Her parents had died when she was an infant, nearly twenty years earlier and the family didn’t know what had become of the child. The child had been left a fortune by an elderly relation, and so it was decided that it was time she was found. Unfortunately Miles’ luggage was in Paris, his pocket-book was stolen, the friends who he hoped would put him up were away, and so he wasn’t at all sure what he should do for the night. 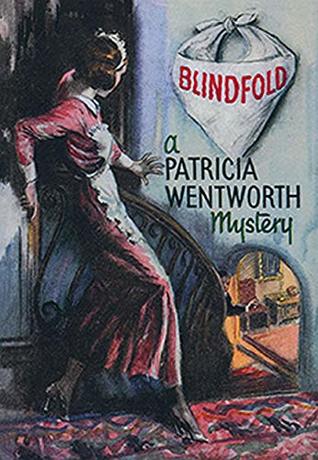 Eager to talk about, Flossie told ‘Mr Miles’ all about what had happened to her. He was incredulous, but he found that he couldn’t question her sincerity or her emotional state. They talked together for some time, and then Flossie went home to the aunt who had raised her and Miles set off to untangle his problems and begin his quest.

Neither expected to meet again, but they did; because, of course, the mystery of the missing heiress and the mystery of what happened at that house were closely linked.

A new parlour maid and Miles’s friends would also be drawn into the plot.

There is a great deal of plot, with many twists and along the way, and I was captivated from the first page to the last.

The book is a little over-full, but I really can’t think I would have left out.

There is a large and diverse cast of characters, and each one has a part to play and a story of their own. I would have been happy to spend  more time with many of them; and I would have loved to know just a little more about certain stories that played out in the past or the might play out after the story in this book was over.

Patricia Wentworth had the gift of bringing characters to life, of making her readers care, quickly and efficiently; and she knew exactly which details to share to illuminate them, their lives and their world.

In this book she went right across the class spectrum, without ever hitting a wrong note.

There is much intrigue, wonderful human drama and a good dash of romance before everything is resolved.

I was held in the moment, because there was always something to hold my interest, and that is the best way to read this book. I wouldn’t advise thinking too much about the overall structure, because that reveals many coincidences, much that is highly improbable, and a criminal plot that is downright silly.

This isn’t a book to challenge my favourite Patrician Wentworth stand-alones – the courtroom drama in Silence in Court and and the romantic suspense in Kingdom Lost – but it is a wonderful entertainment and it was definitely the right book at the right time.

The last chapter in Dorothy Richardson’s Pilgrimage – the tenth of thirteen – ended at a point when Miriam Henderson had been given the life and space, during a visit to the country, to come to understand herself and her situation a little more than she had before, and to made some decisions about what she might do next in life. That made her  happier and more purposeful than she had been for quite some time.

This next chapter – the last to be published as a single volume – finds her back in London, and its focus is on how we let go and move on.

It is clear that things have changed since Miriam was last in the city. She looks back at her life there and the people she has known with affection and nostalgia. She considers a little matchmaking, bringing Michael and Amabel together; hesitating as she realises it will mean losing something of her relationships with each of them but ultimately deciding it is the right thing for her to do.

I found it so easy to empathise with Miriam and  in these opening pages; and I loved the writing that was as beautiful as it has ever been and a little more classical and conventional than it had been before.

A wonderful moment of revelation told her that she was going the right thing:

“And it was then that the wordless thought had come like an arrow aimed from a height downwards into her heart and, before her awakened mind, dropping its preoccupation, could reach the words that already were sounding within it, in the quiet tone of someone offering a suggestion and ready to wait while it was surveyed, she was within that lifting tide of emotion.

With a single up-swinging movement, she was clear of earth and hanging, suspended and motionless, high in the sky, looking, away to the right, into a far-off pearly-blue distance, that held her eyes, seeming to be in motion within itself: an intense crystalline vibration that seemed to be aware of being observed, and even to be amused and to be saying, ‘Yes, this is my reality.’

She was moving, or the sky about her was moving. Masses of pinnacled clouds rose between her and the clear distance and, just as she felt herself sinking, her spirit seemed to be up amongst their high, rejoicing summits.”

It wasn’t clear where she would go or what she would do, but it was clear that she was taking her leave.

A meeting with Hypo Wilson makes her realise that he has little understanding of her and her life,  and when they part company she acknowledges to herself that he is simply the husband of her friend, and that other relationship between the two of them has gone.

Miriam continued to work for the Lycurgans (the Fabian Society) while Amabel, passionate as ever, was eager to be more active and joins in suffragette protests. She is arrested, and when Miriam visits her in prison she realises that that their friendship had faded.

I wondered for a while if Amabel might have been Miriam’s alter-ego; the woman she might have been if she had made different choices  There was something about the timing of her appearance in this series of books, the manner of her arrival, her character and behaviour …

It was an interesting question to ponder, but, on balance,  I’d say probably not. Because I think that Dorothy Richardson’s purpose was to share Miriam’s consciousness, that she was honest, serious and purposeful. I know she left things out – and sometimes that made it difficult to keep track of who was who and exactly what was going on – but I really don’t think she invented. 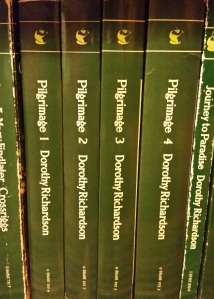 Miriam’s leaving of the job she had held for many years was more difficult; I completely understood her feelings as she thought about somebody else doing the things she has done for so long, without the depth of knowledge and understanding she had built up over the years.

I knew that one of Miriam’s sisters had emigrated and that another had died, but I had completely forgotten that there was another one. Sarah was ill, she needed Miriam’s support, and she needed an operation that neither of them could afford. It was fortunate that Miriam had a friend who was a doctor; he made sure that Sarah  had what she needed and he expressed concern about Miriam’s own physical and mental health.

There were hints that Miriam had been pregnant, and that either she had miscarried or that it had simply been a scare, but they were the faintest of hints and I really couldn’t form a conclusion. That does seem to be the way with Dorothy Richardson; she only shares some of Miriam’s sub-consciousness and I can’t help thinking that she was either unwilling or unable to share her deepest and most profound emotions.

I appreciated many of the elements of ‘Clear Horizon’ but I wish that there had been a little more about Miriam’s steps into the future and a little less filling in the details of the decision she made at the end of the last book.

I know that Dorothy Richardson must have had reasons for what she did; she was in her sixties, she had been working on Pilgrimage for more than quarter of a century, and she knew that interest was declining when she wrote this book. But I can’t help feeling that there is so much more she could write about Miriam’s life, that she has barely written about Miriam as a writer at all, and that there isn’t going to be enough room for everything I want to read in the two books that are left.

There isn’t. I know that, I know that the last book is unfinished, and that maybe this sequence of books could never be finished.

I’m glad I’m still reading, but I’m ready to know where it will end.