In 1965, when she was sixty years old, Margery Sharp published a lovely novel that drew on her memories of a spell of her childhood that she spent in Malta.

It was clear from her opening words that they were warm and happy memories.

Below the low stone wall, beyond the rocks, sun-pennies danced on the blue Mediterranean; so dazzlingly, they could be looked at only between dropped lashes. (In 1913, the pre-sunglass era, light was permitted to assault the naked eye.) opposite, across the road called Victoria Avenue, great bolts of sunlight struck at the white stone buildings and ricocheted off the windows. A puff of dust was a puff of gold-dust, an orange spilled from a basket like a windfall from the Hesperides.

Everything sparkled, from the sun-pennies on the sea to the buckles on a cab horse’s harness, from the buttons on a child’s reefer jacket to the heavy gold pendant at a girl’s ear.

Everything sparkled or shone, even the stiff black hoods of the old women; serge or alpaca, worn smooth by use, under that sun a glossy blackbird-plumage.

Mr Pennon  had a small private income, and that allowed him to move his family to the Next-Door-Island – next door to Malta. They were all happy there, but their feelings about the place would differ. Mr and Mrs Pennon, Muriel – their eldest child – and Alan – their youngest child – would always be expats. Only Cathy – their middle child – became a real islander. She was a true child of the sun and she thrived in the heat.

This is Cathy’s story.

It was lovely to watch as she enthusiastically joined the parade that her siblings ducked into a shop to avoid, and to see that she was was so completely at home that the approached and conversed with her island’s governor.

‘Aren’t you glad,’ began Cathy, ‘we’ve an Empire the sun never sets on?’

To her surprise, the Governor appeared to meditate. For a moment she wondered if age might have suddenly have turned him deaf. He was actually in his early forties, but to Cathy old as the hills.

‘Very,’ said the Governor at last. We Anglo-Saxons need the sun more than most, to warm and civilize us.’

‘I thought it was us who civilized the others,’ said Cathy, surprised again.

‘There are two ways of looking at everything, said the governor, ‘Suppose an Indian told you it was they who taught us to wash?’

‘I shouldn’t believe it,’ said Cathy at once.

‘You would be wrong,’ said the Governor, ‘and even the Army admits they taught us to play polo. Hows that for a civilizing influence?’

When war seemed likely, Mr Pennon decided they that it was time to take his family ‘home.’ None of the children remembered England,  but they had read about it in books by Kate Greenaway. Stories about warmth, community, fields, maypole dancing ….

The reality that faced them, in a dull London suburb, was rather different..

Everything was cold. The streets were cold, it was cold on the trams and cold in the shops. A puff of breath showed on the cold air like a puff of smoke without a fire, the icy bite from the pavement penetrated leather sole and woollen stocking ….

Muriel and Alan adapted to a new way of life, but Cathy withered without the warmth of the sun and the air of her island.

The story follows Cathy, and it keeps an eye on Muriel and Alan, as they grow up, establish themselves as adults, and go their separate ways. Muriel chooses a husband from a band of suitors and is happy as a wife and mother. Alan enjoys the bachelor life and appreciated the things that a successful career in banking gives him. Cathy drifts through life, until her sister steers her into a position as a governess and lady’s companion at a country house. It is a nice niche, she can move between the family upstairs and the staff downstairs as she likes, she achieves much while doing very little, but her heart remains with the Next-Door-Island.

The story spans more than three decades – the years of two wars and the years between – and the events of those years and the great changes that they brought are reflected. It is written with warmth and wit; it is populated by a wonderfully diverse band of characters, drawn with the understanding that comes from careful observation and thought; and that cast is deployed very effectively in a plot that appears simple and natural but is actually very cleverly constructed.

Cathy sits nicely in the pantheon of Margery Sharp heroines. She has the insouciance of Cluny Brown, the inscrutability of Lise Lillywhite, and the clear ambition of Martha Hogg – but not the means of achieving that ambition. She tries, when Muriel has a suitor who might be able to help, when she runs into other returnees from her island, but none of them share her ambition and all of them have other interests and concerns.

Her story ends at the end of WWII, with an unexpected twist and a wonderful possibility opening up.

I’d love to know what happens next, but it’s nice to be left with something to think about, and that ending – and this book – was pretty much perfect. 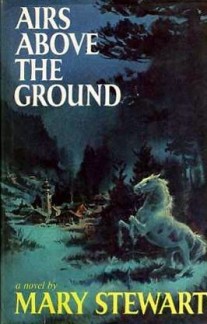